Former Soviet republics caught between Moscow and Ankara, with some fearing improved relations could undermine their independence 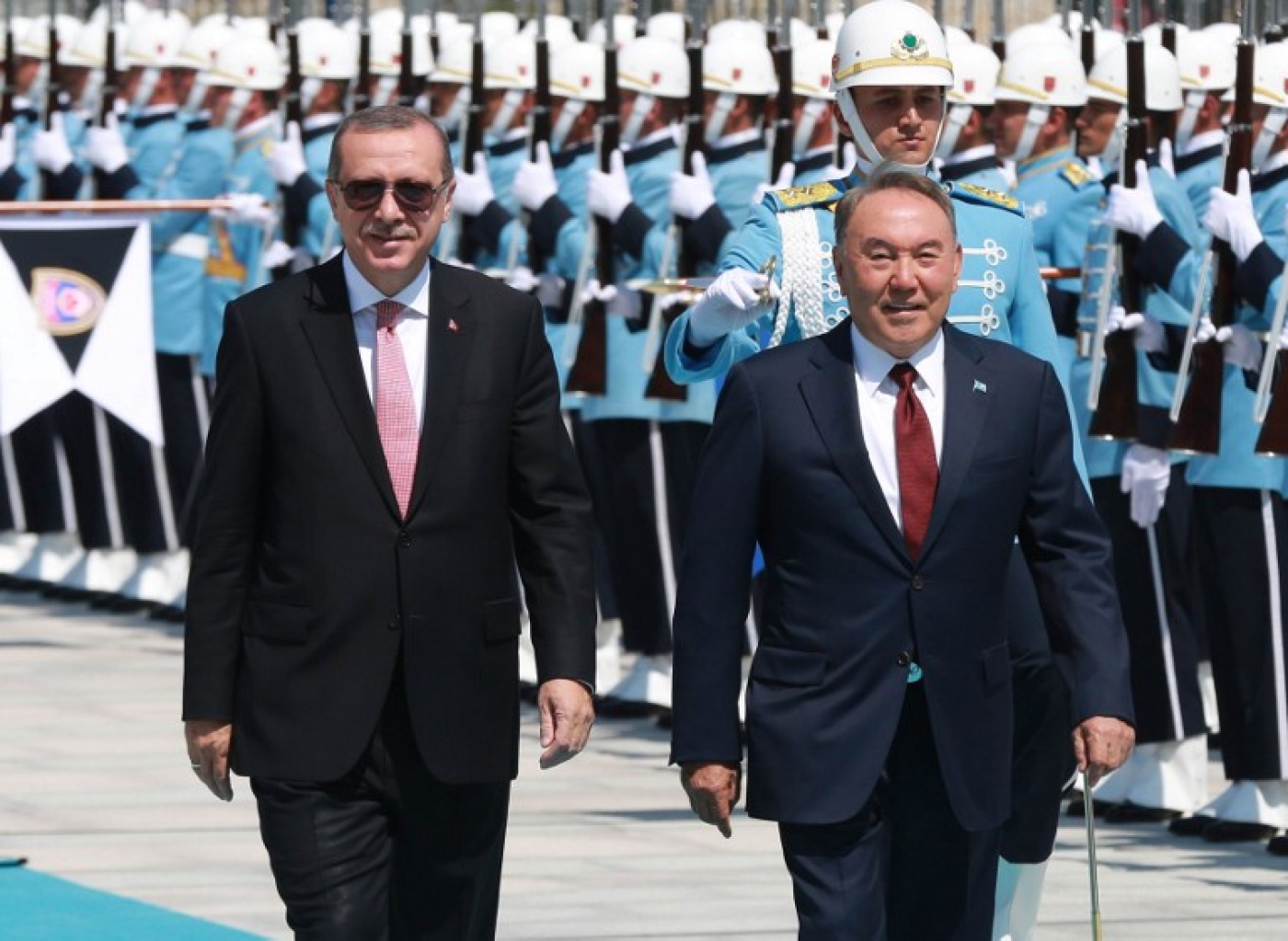 ISTANBUL, Turkey – Russia is seeking to exploit the post-coup climate in Turkey by stepping up its efforts to tempt Ankara into abandoning its traditional Western allies and join a Moscow-led military alliance instead, according to a Turkish intelligence source and regional analysts.

But the two countries’ sudden rapprochement has caused ripples of concern in some of the former Soviet republics in Central Asia which fear that their own independence could also be undermined if Turkey is drawn away from NATO and into an emboldened and expansionist Russia’s sphere of influence.

In a further twist however, Turkey finds itself at odds with traditional regional allies Kazakhstan and Kyrgyzstan which have both rebuffed calls to close private schools run by the Gulen network, which Turkish President Recep Tayyip Erdogan blames for the 15 July attempt to overthrow him.

Ankara and Moscow have supported opposite sides in Syria since the country's civil war began in 2011 and fell out when Turkey shot down a Russian fighter jet near the Syrian border last November.

But Russian President Vladimir Putin has put aside his distrust of Erdogan and backed him since the coup as part of grander plans to entice Ankara to eventually join a military pact led by Moscow, a retired Turkish intelligence official told Middle East Eye.

“The surge in anti-Western sentiment, especially anti-US sentiment, following the failed coup attempt pushed Putin to act even more quickly than planned and take maximum advantage of the existing climate,” said the intelligence official, who wished to remain anonymous.

“It helps to look at who benefits from these growing anti-Western feelings and by trying to implicate US involvement,” he added. “Rumours about American involvement in the coup attempt are also the work of Moscow. It is all to force Turkey into a rash decision.”

He even suggested Russian intelligence might have held back on sharing information about the attempted coup before eventually tipping off colleagues in the Turkish intelligence services simply to maximise its tactical gains.

Reports in the aftermath of the coup attempt claimed Moscow had passed on the information after a Russian military intelligence unit based in Syria intercepted Turkish army exchanges and encoded radio messages about the plot.

The official said the icing on the cake for Moscow would be to get Turkey to join the Shanghai Pact, an economic and military grouping of Eurasian states currently comprising of Russia, China, Kazakhstan, Kyrgyzstan, Tajikistan and Uzbekistan.

India and Pakistan are also set to join the pact in 2017.

In the past Erdogan, too, has strongly hinted at the possibility of Turkey seeking membership in the Shanghai Pact.

But analysts at the time largely regarded these comments as Turkish ultimatums directed at the EU, which had started taking a tougher line about Erdogan’s drift towards authoritarianism.

Altynbek Joldoshov, an academic at the international relations department at the Kyrgyz Turkish Manas University in Bishkek, told MEE there was no doubt that Russia would like to entice Turkey into a Moscow-led economic and military pact.

“Moscow would absolutely love that but it isn’t feasible at all given the fragility of Russian-Turkish relations historically,” said Joldoshov. “They have time and again needed some Central Asian states to intervene and smooth things out between them.”

Joldoshov pointed to the widely differing positions of Moscow and Ankara regarding Syria and said that Turkey’s recent ground incursion into Jarablus threatened to create a new rupture, despite the efforts of Kazakhstan to reconcile the two regional heavyweights.

“Ties between Turkey and the US and EU might be very strained at the moment but they have a history of working together. Ankara and Moscow have no such history,” said Joldoshov.

According to the intelligence official, even when Moscow was in direct confrontation with Ankara over the downed Russian jet, Putin stuck to his long-term plan.

He said reports emanating from Moscow about Ankara exporting oil on behalf of the Islamic State (IS) group was meant to sow distrust between the US and Turkey.

He added that Putin would also seek to entice Erdogan with the model employed by most Central Asian states, where authoritarian presidents rule for decades.

Ahmet Kasim Han, a professor of international relations at Istanbul’s Kadir Has University, said the mediating role played by Central Asian states was natural, but insisted any talk of attempted axis shifts for Turkey was greatly exaggerated.

Han told MEE that Central Asian states like Kazakhstan, which has an almost 50-50 balance between ethnic Russians and Turkic peoples in its population, were well placed to mediate and resolve disputes between Ankara and Moscow, both of which can also influence conditions in their own countries.

But Han said to view such mediation attempts and other Russian actions as attempts to lure Turkey into an axis shift would be tantamount to underestimating Moscow’s strategic intelligence.

“Russia sees its relations with Turkey as part of its wider relations with NATO, and thus the United States. Moscow is not seeking direct confrontation with the US and therefore wouldn’t entertain the idea of tempting Ankara to quit NATO,” he said.

A Turkey rooted in the Western camp also suited Moscow in regard to Central Asia, according to Han.

“Russia would much prefer any relations between Central Asian states and the West to be through Turkey rather than through direct relations. It makes it easier for Moscow to keep a closer eye on things.”

But he said none of that meant Moscow would not use every opportunity to drive a wedge between Turkey and its Western allies and deepen the existing rift between them.

In Joldoshov’s view, a Turkey rooted to the West is crucial for Central Asian states, both because it serves as a bridge to Europe and the US and also because it guarantees the independence of those states by acting as a counter balance to Russian power in the region.

Joldoshov said that applied to Kazakhstan and Kyrgyzstan in particular.

Uzbekistan, where President Islam Karimov, the country's leader since independence in 1991, is reported to have suffered a brain haemorrhage, has a strictly secular system of government and has kept its distance from its more religiously-orientated Turkish counterpart.

Turkmenistan meanwhile has a policy of strict neutrality which is recognised by the United Nations.

“Kazakhstan and Kyrgyzstan realise the value of a Western-allied Turkey when it comes to any potential threats to the continuation of their independence,” he said.

But that relationship has been complicated by Turkey's targeting of the Hizmet movement associated with the US-based exiled cleric Fethullah Gulen, who Turkish officials have accused of orchestrating the coup attempt.

Hizmet (which means service) is best known for running educational institutions in both Turkey and abroad. In the days when it was on good terms with Erdogan’s ruling Justice and Development Party (AKP), that network of Hizmet schools abroad was also used to project Ankara’s soft power.

One of the biggest Turkish foreign policy challenges in the near future will be to combat the Gulen diaspora, said commentators.

But the belief is that the Turkish foreign ministry at this time lacks both the tools and acumen to effectively tackle the Gulen movement abroad. 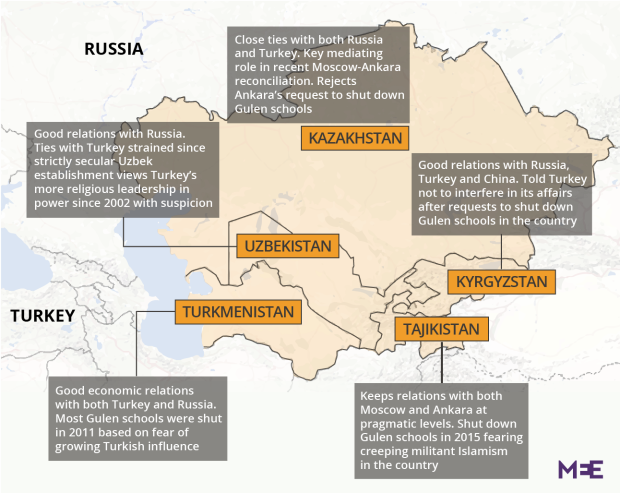 One of the regions with many Gulen-run educational institutions – considered a vital source of income to the Hizmet movement - is Central Asia.

Thus far calls by Turkey on officials in Kazakhstan and Kyrgyzstan to take action against Hizmet, have been met with rejection.

Krygyz officials were blunt in their response and its president told Turkey to not meddle in its affairs following a request to close Gulen schools there. Kazakhstan, too, has refused to act on Turkish requests regarding Gulen-run educational institutions.

Joldoshov said Turkey had not been able to persuade the Central Asian states to shut down the schools because they saw it as interference in their internal affairs and also viewed Ankara’s position as contradictory.

“Now Central Asian officials are having difficulty believing Ankara that these educational institutions represent such evil.”

The intelligence official said the reason behind Turkey’s lack of influence was simple.

“For Turkey to have any real influence in Central Asia it would have to have a coherent policy for the region. It has never had one,” he said. “I doubt they will get very far in their endeavour to have these schools shut.

Han also said Turkey’s sway in Central Asia was “nowhere near what it would like it or believes it to be”.

He also warned against viewing these states as mere stooges ready to do the bidding of their stronger regional counterparts.

“These states have been independent for more than three decades now. They will not jeopardise that independence by acquiescing to any one side completely,” he said. Syria War
It is Russia, not IS or al-Qaeda, that poses primary threat to US
Shahir Shahidsaless