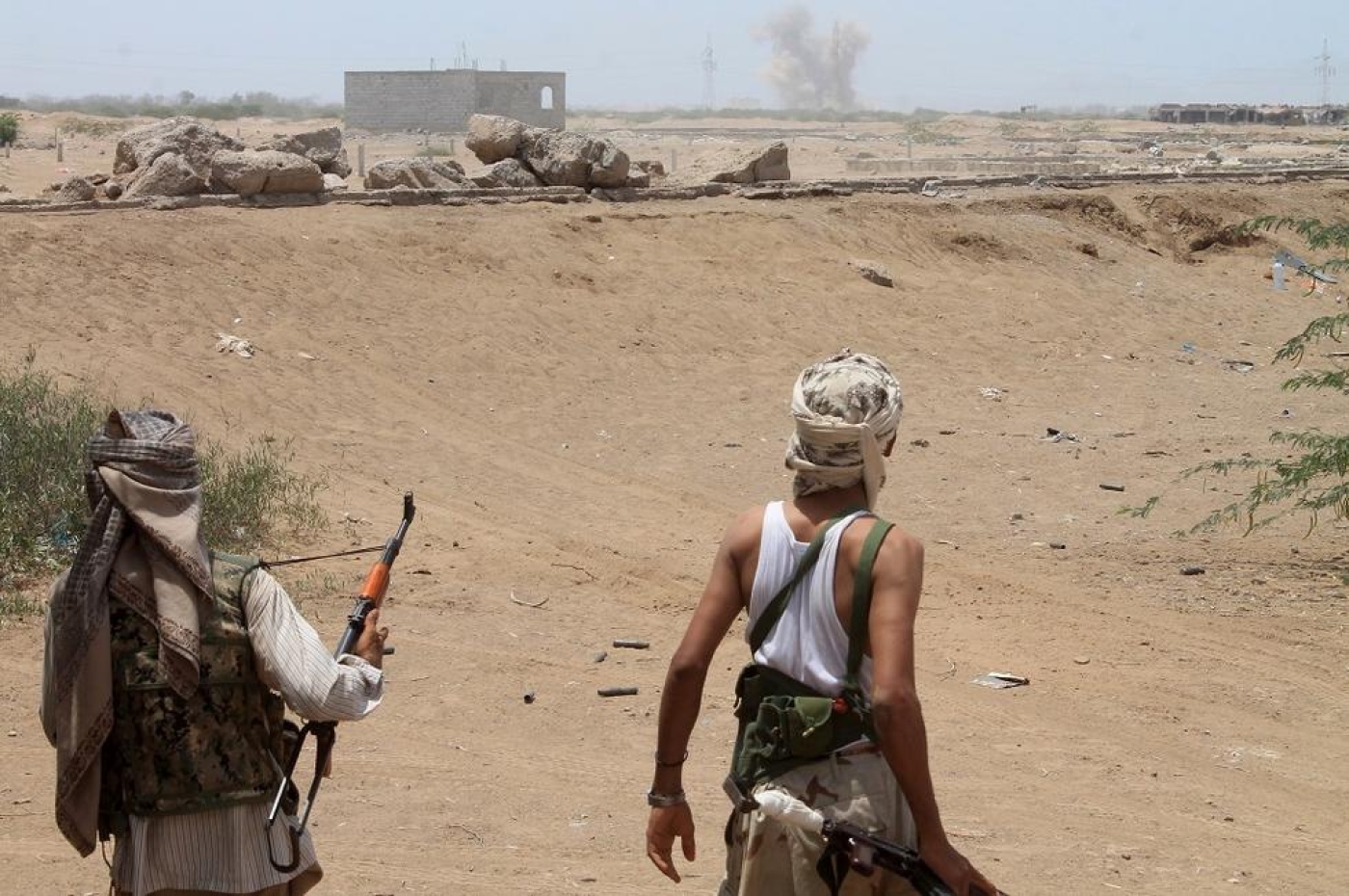 Fighters loyal to President Hadi clash with Houthi militias outside Aden on 30 May, 2015 (AFP)
By
MEE and agencies

Yemen continued to unravel on Saturday, with heavy Saudi bombing and Houthi shelling in Aden, and a bomb blast ripping through a mosque in Sanaa, killing three.

The escalation in violence came just hours after peace talks in Geneva ended in disarray and the delegates flew home.

The car bomb exploded on Saturday near the Kobbat al-Mehdi mosque in the Old City of Sanaa, where Shia Muslims attend prayers.

Official casualty figures have not been released yet, but al-Jazeera Arabic is reporting that at least three people have been killed.

Another car bomb now, next to alMahdi Dome mosque in Tahrir area in Sana'a #Yemen

The blast came just days after a string of car bombs targeting Shia mosques and Houthi buildings in the capital killed 31 people. Islamic State militants claimed responsibility for the attack and said it was in response to the Houthi takeover of Sanaa.

Hours before the blast, the southern capital of Aden was also rocked by heavy Saudi airstrikes and Houthi shelling, sourced told AFP.

"The objective is to close the noose around the Houthi rebels in Aden and assist the popular resistance committees," the source said.

The escalation in violence follows on from the collapse of UN-brokered peace talks in Geneva.

"I won't beat around the bush. There was no kind of agreement reached," the UN special envoy for Yemen, Ismail Ould Cheikh Ahmed, told reporters on Friday.

After the talks collapsed, Saudi Arabia’s foreign minister said that all options remained “on the table”.

"The kingdom and its allies are committed to defending legitimacy in Yemen and stopping the militia allied with Iran and the [Lebanese Shiite movement] Hezbollah from controlling Yemen," Adel al-Jubeir told the Russian broadcaster Russia Today.

"We will continue our operations to protect the Yemeni people and the legitimate government there.”

The Saudis formed a coalition of mainly Arab states and began bombing Yemen on 26 March in an attempt to reverse massive advances by the Houthis and forces loyal to Saleh.

The Houthis took over the capital Sanaa last September. While a UN-brokered for their withdrawal was penned, the Houthis stormed a string of government buildings in January and placed several key political figures under house arrest. Hadi was able to flee to Aden, but the Houthis were quickly able to push south and managed to seize large swathes of the country.

The talks which began last week were extended past their 18 June deadline, set to mark the start of Ramadan, but little progress appears to have been made with the two sides still refusing to meet face-to-face and physical fights breaking out between the two camps.

Despite this Ahmed told Reuters that: “There is a certain willingness from all the parties to discuss issues around a ceasefire accompanied by withdrawal.

“I personally come out from these few days with a certain degree of optimism that we can achieve this [in further consultations] in the coming days.”

More than 2,600 have been killed in the fighting which has also left 80 percent of the population - 20 million people - in need of urgent humanitarian aid, according to UN estimates.

Aid groups and the UN say a dire humanitarian crisis is unfolding, and have appealed on all sides to stop fighting to allow them to move supplies to Yemen and distribute them to the needy.

On Saturday, the UN appealed for $1.6bn from the international community to help ease the looming "humanitarian catastrophe".

The situation is particularly tragic in Aden, where residents have complained of food and water shortages, while medics speak of  rapidly deteriorating health situation and the spread of disease.

A boat laden with supplies, including flour, that was due to dock in Aden this week had to divert course to Hodeida in western Yemen due to the fighting, Aden's deputy governor Nayef al-Bakri said.

Bakri accused the Houthis of deliberately forcing the vessel, chartered by the UN's World Food Programme, to change course to Hodeida where they control the port to punish the people of Aden.

"They want to deprive Aden's residents, who have been resisting their presence, from this aid," he said