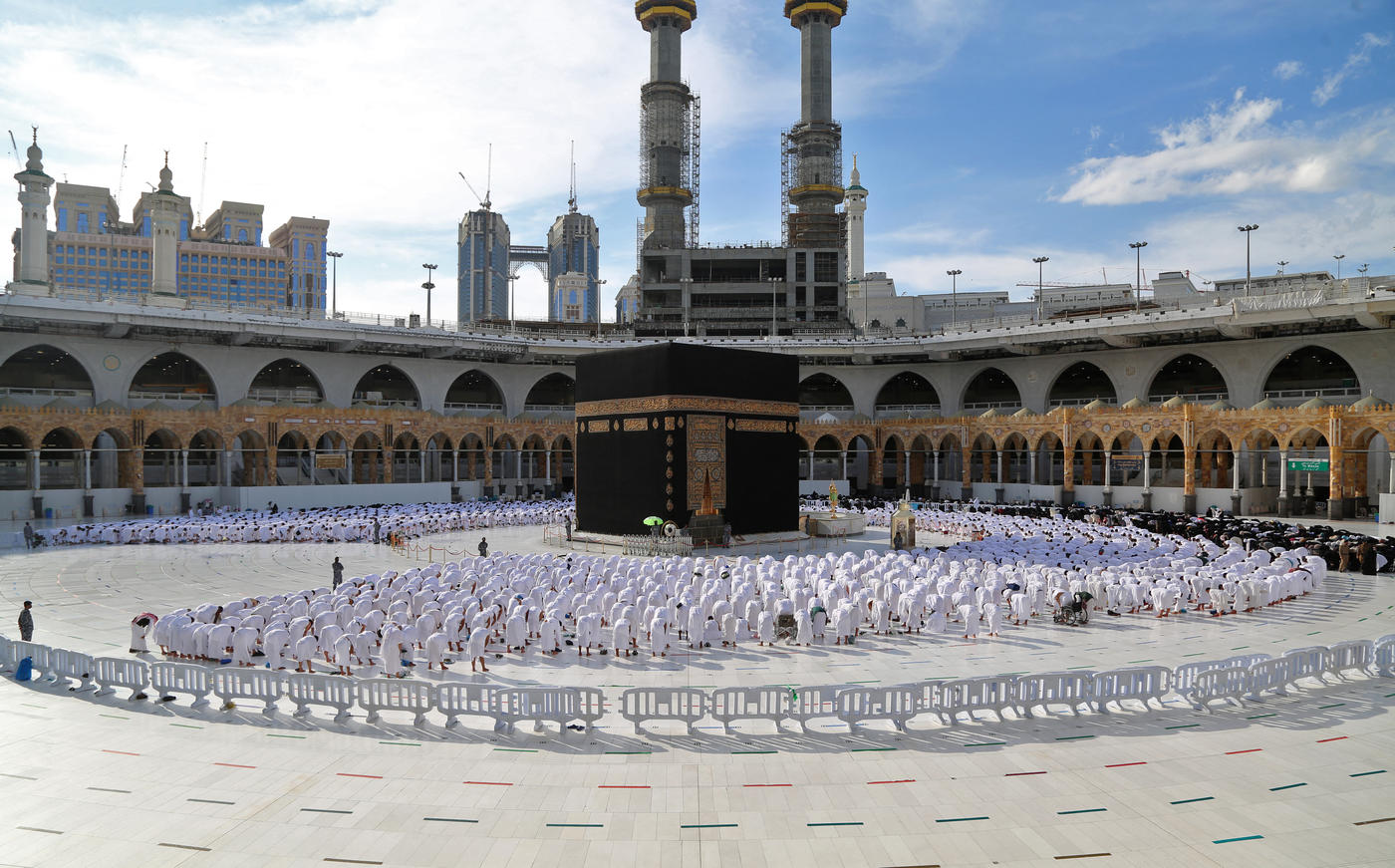 Rows of worshippers pray at the Grand Mosque in Saudi Arabia's holy city of Mecca, on 30 December 2021 (AFP)
By
Mohammad Ayesh

A Saudi court on Thursday sentenced a former ambassador to six years in prison over his involvement in corruption and abuse of public function, including the sale of entry visas to the kingdom for the purpose of visiting the holy sites of Mecca and Medina, according to the Saudi Okaz newspaper.

The former ambassador (whose name was not mentioned by the newspaper) was fined 300,000 riyals ($80,000), after being convicted of abusing his job and selling pilgrimage visas illegally, according to Okaz.

A number of other officials were also convicted over the scandal.

The National Anti-Corruption Commission (Nazaha) was established in 2011 with the stated aim of protecting public money, fighting corruption and eliminating it, and "purifying society of its dangerous effects and dire consequences for the state in its institutions and individuals, and the future of its generations".

A Tunisian MP has suggested that the country's president Kais Saied should face the "death penalty" for suspending the constitution and parliament in July, in what critics have branded a coup.

Member of parliament and head of Tunisia's Dignity Coalition party, Seifeddine Makhlouf, said in an exclusive interview with the Arabi 21 website that Saied should face charges of "conspiring against the internal security of the state and changing the components of the state, which are crimes punishable by death penalty in the Tunisian law".

Makhlouf said he had submitted a criminal complaint to the public prosecutor following leaks reported by Middle East Eye about plans for a "constitutional coup" by Saied in May.

"The Tunisian public prosecution entrusted the central research division of the National Guard in El Aouina to follow up the complaint, so it visited me and took my statements regarding the case," Makhlouf said.

"There is a judicial prosecution regarding this complaint, almost all of its facts have been implemented, so all the elements of the crime have been achieved. It is an offence punishable by death penalty for anyone who practice or commits an attack intended to replace the components of the state," the Tunisian politician continued.

"If the law is applied, then President Kais Saied and his companions will be sentenced to death, according to articles 68 and 72 of the Tunisian Penal Code."

Snowstorms in northern Syria risk the lives and stability of more than one and a half million displaced people, according to a report published by the London-based Al-Quds Al-Arabi newspaper.

More than 2,000 families have fled in the face of the storms, which damaged more than 72 camps near the Syrian-Turkish border. Activists circulated images and videos showing tents surrounded by water and snow, amid continuing heavy snowfall on the camps.

Rami al-Sayed, an activist from one of the camps in the countryside of Aleppo in Syria, said "the situation is catastrophic due to the snowstorm that hit dozens of camps in the north of Syria".

"The snow caused the demolition of dozens of tents, many people slept outdoors, many of them wore wet clothes and were laying on the ground, amid low temperatures, in addition to the lack of fuel for heating," he explained.

The activist quoted a statement from a 70-year old woman: "I wish we died in our homes before we see these conditions... amidst the storm, I am looking for a tent to house me along with my orphaned grandson".

Turkish authorities have lifted the ban on a number of Saudi and Emirati media sites, according to the London-based Al-Araby Al-Jadeed newspaper.

Turkish President Recep Tayyip Erdogan announced his intention to visit Saudi Arabia and the UAE in February, which observers considered an indication of improving relations between Ankara and the two Gulf kingdoms.

The decision affects the official Saudi Press Agency, the official Emirates News Agency, and the websites of a number of Saudi and Emirati newspapers, including Al-Arabiya.

Ankara imposed the ban on the news sites in April 2020, in response to Riyadh and Abu Dhabi blocking Turkish government websites.

The Turkish ban at the time included about 12 Emirati and Saudi websites, in addition to the two official agencies.