Saudi Arabia and a coalition of regional allies launched a series of airstrikes in Yemen on Wednesday night against the Houthi militia, which the movement's spokesman has called a "declaration of war".

At least 17 civilians have been killed in the capital Sanaa during the overnight offensive, although local medical sources have said that this number could yet rise. The airstrikes also targeted al-Daylami airbase and the adjacent international airport in north Sanaa, as well as the presidential complex seized by the rebels in January, military sources told AFP.

Witnesses said residents were helping civil defence officials to search for any more victims under the rubble of the houses damaged in the raids.

The homes are located in a neighbourhood adjacent to the international airport and an air base targeted in the raids, said local residents.

Adel al-Jubair, Saudi ambassador to the US, said on Wednesday that a coalition consisting of 10 countries, including the Gulf Cooperation Council (GCC), had begun airstrikes at 7pm Eastern time (23.00 GMT). So far, Egypt and Jordan have confirmed they will join Qatar, Kuwait, Bahrain, the United Arab Emirates and Saudi Arabia in the coalition, Morocco and Sudan have "expressed desire to participate in the operation," while Pakistan is examining a request from Saudi Arabia to join the coalition.

"The operation is to defend and support the legitimate government of Yemen and prevent the radical Houthi movement from taking over the country," Jubair told reporters in Washington.

Jubair added that for the moment, the action was confined to airstrikes on various targets around Yemen, but that other military assets were being mobilised and that the coalition "would do whatever it takes".

According to Saudi-owned al-Arabiya, the kingdom has already mobilised 150,000 troops, which amounts to a vast majority of Saudi's standing army.

The Egyptian foreign ministry said in a statement: "Coordination is under way with Saudi Arabia and the Gulf states to prepare for participation by the Egyptian air force and Egyptian navy, and a ground force if the situation warrants, as part of the coalition action."

Meanwhile, a Jordanian official said Jordan’s participation in the operation, alongside other Arab countries, was aimed at "supporting the legitimacy, stability and security of Yemen”. A military source later told al-Arabiya that Amman has not made any decision about Sauid's request to provide military ground troops.

"I can confirm we have been contacted by Saudi Arabia in this regard. The matter is being examined. That's all I have to say at the moment," she said at a regular press briefing.

The United States has announced it is coordinating closely with Saudi Arabia and regional allies in the military action, including providing intelligence and logistical support, the White House said Wednesday.

Yemen has been teetering on the brink of civil war since late January when the Houthis stages a power grab in the capital Sanna. They have since pushed further south, coming to the outskirts of Aden.

But Al-Jazeera did report that three other Houthi military commanders, Abdel Khaleq Badereddine al-Houthi, Yousef al-Madani and Yousef al-Fishi were all killed in the attack.

Iran has also condemned Saudi strikes in Yemen as a “dangerous step” that violated "international responsibilities and national sovereignty,” while Iranian state media said on Thursday the military operation was a "US-backed aggression".

Foreign ministry spokeswoman Marzieh Afkham said that the military action would "further complicate the situation, spread the crisis and remove opportunities for a peaceful resolution of Yemen’s internal differences".

"This aggression will have no result except to spread terrorism and extremism, and increase insecurity throughout the region," she said in a statement, calling for an immediate halt to the air strikes.

Iran denies providing money and training to Shiite Houthi militants in Yemen as claimed by some Western and Yemeni officials. However, Tehran officials have sent confusing signals about the extent of their support, previously saying that they considered the Houthis to be "similar" to Hezbollah in Lebanon.

The offensive came after the Houthi rebels threatened Yemen’s second city of Aden, where Hadi had taken refuge after fleeing Sanaa, dismissing as "null" and "illegitimate" all recently issued Houthi decrees and retracting a resignation he had tendered earlier to Yemen's parliament.

Earlier Wednesday, Hadi fled from his residence in Aden amid fighting with Houthi rebels and security forces. Conflicting reports have emerged as to Hadi’s whereabouts.

"The vigilantes regained control of the airport after hours of fighting with pro-Saleh troops," a security source told the Anadolu Agency.

According to the source, several people were killed and wounded on both sides.

The move has raised concerns that the conflict could spread in the oil-rich Middle East and possibly disrupt production. The Houthis had also been advancing on the strategically-important Bab al-Mandeb strait through which much of the world’s maritime trade and oil passes.

Upon the news, West Texas Intermediate crude futures rallied to about $51 a barrel. Prices have been falling since last year when leading OPEC member Saudi Arabia led the charge to keep global production steady and prices low.

Earlier this week, the kingdom once again reiterated its commitment to the policy, urging the world’s oil-producers to stay firm despite the fiscal consequences. 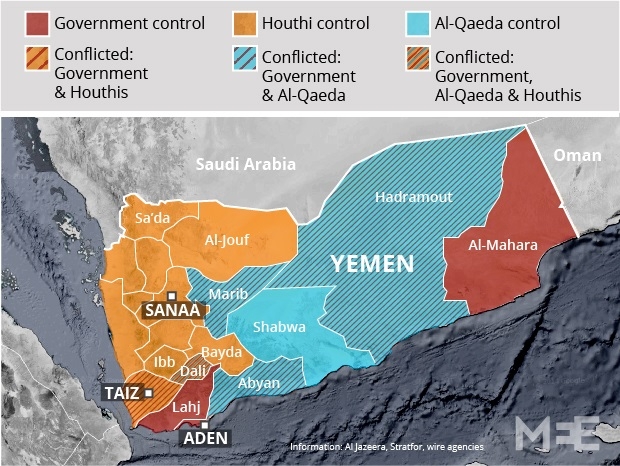