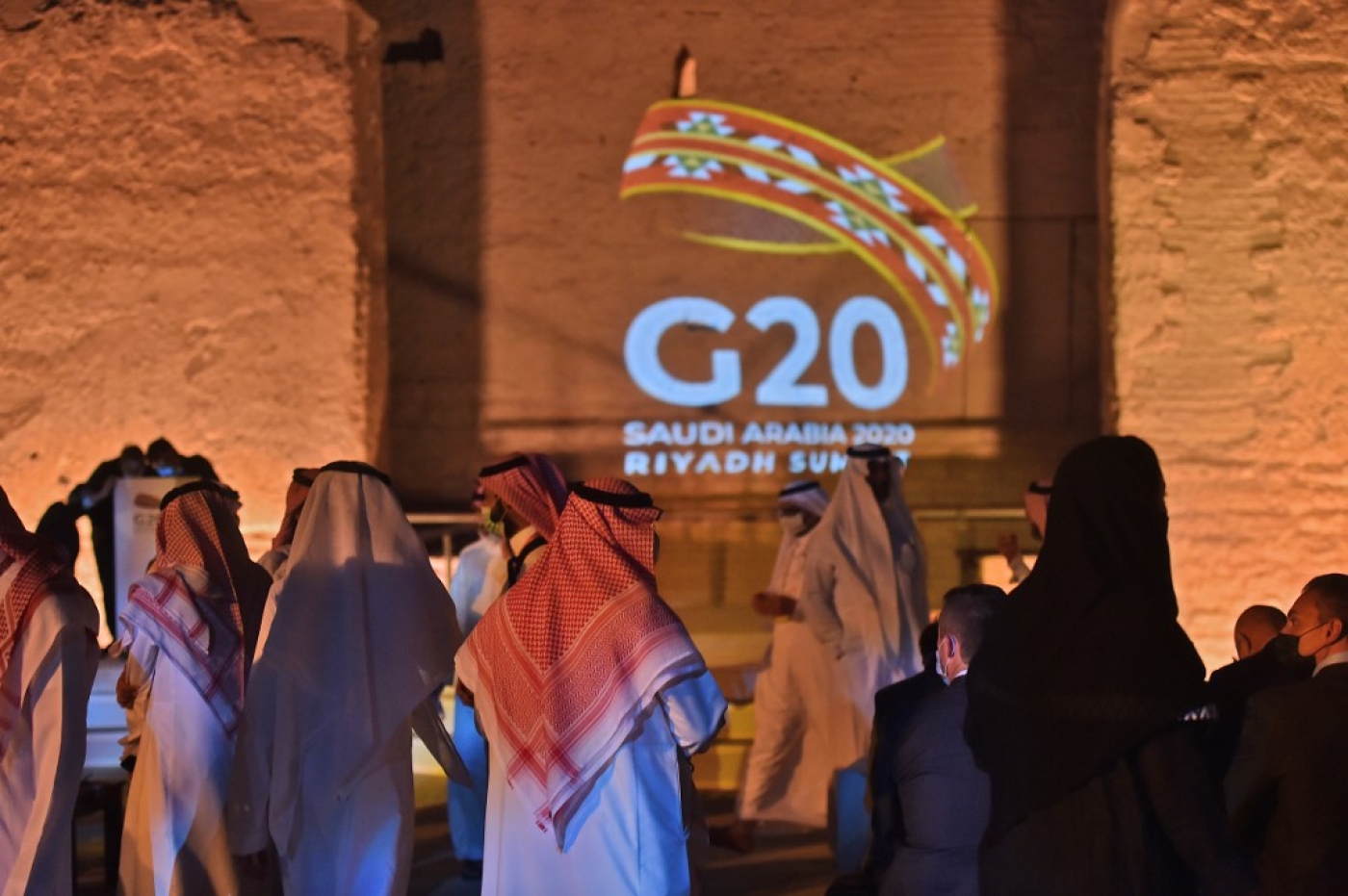 G20 logo is projected at historical al-Tarif in Diriyah district on outskirts of Saudi capital, Riyadh, on 20 November (AFP)
By
Sheren Khalel

The summit, held virtually this year amid the Covid-19 pandemic, is an annual meeting of the world's 20 largest economies.

Although a different G20 country hosts the meeting each year, to the dismay of human rights defenders around the globe, Saudi Arabia is leading the 2020 global gathering on Saturday and Sunday.

Pointing to issues from a lack of accountability for 2018 murder and dismemberment of journalist Jamal Khashoggi to the country's continued imprisonment of activists, rights groups have launched powerful campaigns calling on the international community to hold the kingdom accountable.

'Hypocrisy of the highest order'

On Friday, the UK-based Arab Organisation for Human Rights (AOHR), along with the families of three womens' rights activists imprisoned in the kingdom, took out full-page advertisements in some of the world's leading newspapers, including the Washington Post, LA Times, the Guardian, Germany's Sueddeutsche Zeitung and Canada's Star.

"While Saudi Arabia hosts the summit, it continues to detain scholars and activists - men and women - and deprive them of their basic human rights in blatant hypocrisy," the group said in a statement highlighting the ad campaign.

"The summit is being attended by the leaders of the G20 nations around the world, including the United States, France, United Kingdom, Germany, Canada and Italy - nations that pride themselves on upholding human rights," AOHR said, calling for Saudi Arabia to release all political prisoners.

"This is hypocrisy of the highest order and is not compatible with the laws and ethos."

They also stressed Saudi Arabia's track record of extrajudicial killings, the detention of women's rights advocates and journalists, and the country's government-sanctioned executions, which in 2019 amounted to 178 deaths.

The Washington Post Press Freedom Partnership, along with Reporters Without Borders (known by its French acronym, RSF), also took out a full-page newspaper advert in the Washington Post this month calling for the release of journalists and other activists jailed in Saudi Arabia.

Ahead of #G20SaudiArabia, the @wppressfreedom published a full page ad from @RSF_en calling for the release of 34 jailed journalists in Saudi Arabia and other activists, who were only trying to make a difference in the Kingdom. pic.twitter.com/hvWbAvBEu5

RSF has also launched a social media campaign seeking to "hijack" the hashtag #G20SaudiArabia with critical messages aimed at the kingdom.

"RSF is calling for international public support to hijack the official #G20SaudiArabia hashtag with messages and images in support of the country’s 34 unjustly jailed journalists," the group said on the campaign's webpage, which includes a pre-written Twitter post users can customise for their own posts.

"Saudi Arabia is one of the world’s most prolific jailers of journalists," RSF says, going on to denounce the "continued impunity" of officials involved in the murder and dismemberment of Khashoggi in Saudi Arabia's Istanbul consulate two years ago.

Human Rights Watch (HRW) has also called on the international community to pressure Saudi Arabia to release political prisoners and "provide accountability for past abuses" ahead of the G20 summit, and has encouraged social media users to post such demands with the #G20SaudiArabia hashtag.

The hashtag has now been used by scores of human rights groups and activists, detracting from the public relations tweets aimed at rejuvenating the country's international image.

"The G20 presidency has conferred an undeserved mark of international prestige on the government of Crown Prince Mohammad bin Salman,” said Michael Page, deputy Middle East director at HRW, in a statement announcing the hashtag campaign earlier this month.

"Instead of signalling its concern for Saudi Arabia’s serious abuses, the G20 is bolstering the Saudi government’s well-funded publicity efforts to portray the country as 'reforming', despite a significant increase in repression since 2017," he said.

Governments joining the virtual G20 summit hosted by Saudi Arabia shouldn't let the crown prince whitewash his horrible rights record. Speak out about the Khashoggi cover-up, the jailing of women's rights activists, and the bombing of Yemeni civilians. https://t.co/atBeLPXXgb pic.twitter.com/Dvusvwi7WR

"Speak out about the Khashoggi cover-up, the jailing of women's rights activists, and the bombing of Yemeni civilians."

'Are you going to ask about her?'

The sister of Loujain Hathloul, one of the women's rights activists who has been on hunger strike at Al-Hayer high security prison since 26 October, has been using the #G20SaudiArabia hashtag in her own posts and retweets, calling for her sister's release.

"Dear #G20 leaders, my activist sister @LoujainHathloul is in prison since May 2018 and on her 23rd day of hunger strike. Saudi Arabia refuses to give us any access to her. Are you going to ask about her? Are you going to call on her release?," Lina al-Hathloul said in a post on Thursday.

Dear #G20 leaders, my activist sister @LoujainHathloul is in prison since May 2018 and on her 23rd day of hunger strike. Saudi Arabia refuses to give us any access to her. Are you going to ask about her? Are you going to call on her release? #G20RiyadhSummit #G20SaudiArabia https://t.co/P35fLbfOXG pic.twitter.com/4nqMDcpVwD

Saudi Arabia's ambassador to the UK allegedly said last month that the government was considering the release of some of its imprisoned female activists ahead of the summit due to mass criticism, but the embassy later denied the report.

Meanwhile, Amnesty International has launched its own campaign, asking people around the globe to sign its petition urging world leaders to use the G20 gathering to pressure Saudi authorities to release all the women's rights activists imprisoned in the kingdom.

As of early Friday morning in the US, the petition had garnered 200,000 signatures.

"The government of Saudi Arabia is trying to improve its image, investing millions of dollars in a public relations campaign so that countries and businesses in the EU and the USA will help it realise its 2030 economic vision," Amnesty said, referring to Saudi Arabia's 10-year plan to diversify its economy away from fossil fuels amid market changes caused by climate concerns.

"This public relations campaign is masking a government campaign of repression, intolerance and human rights violations in Saudi Arabia, and many of these violations are legitimised through the deeply instrumentalised ‘Specialised Criminal Court’," the group said on its petition webpage.