Saudi security forces arrested and detained 10 Egyptian Nubians some 20 months ago, who had gathered to commemorate the 6 October War against Israel Human Rights Watch called on Saudi authorities on Wednesday to immediately release 10 Egyptian Nubians who have been detained for the last 20 months after organising an event commemorating the 6 October War against Israel.

"Saudi authorities are spending billions of dollars hosting major sporting and cultural events to deflect from the country's poor image, but these arrests further demonstrate how little regard the government has for anyone else's rights and culture."

The Gulf Centre for Human Rights (GCHR) said in a previous statement that the case dates back to 25 October 2019, when the Nubian Society in Riyadh held a symposium on the occasion of the 6 October War.

They had banners and pictures of the most prominent Egyptian Nubians who fought in the battle between Israel and a coalition of Arab states led by Egypt and Syria - most notably the late Field Marshal Mohamed Hussein Tantawi.

According to the rights group, Saudi security forces arrested participants and interrogated them on the grounds of not placing the image of President Abdel Fattah el-Sisi in the seminar's poster. 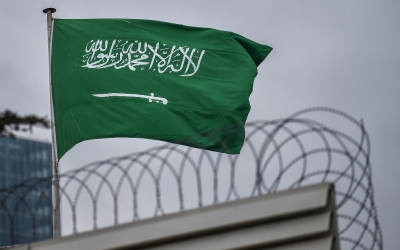 Despite the attempts of the arrested men to explain that the pictures were only for those who took part in the war from the Nubian community, four of the men were arrested in October 2019 and released later that year but then were rearrested along with six others in July 2020.

Shortly after their initial arrest, the Egyptian consulate in Riyadh issued a statement calling on Egyptian citizens in Saudi Arabia to "respect the laws and regulations of the Kingdom". The statement said that it is illegal for non-Saudi nationals to "establish groups or bodies" and called for existing entities to be abolished.

"Saudi Arabia is punishing these men and denying their basic rights for merely trying to peacefully express their cultural heritage," Page said.

"The Egyptian government's apparent support for their arrest reflects decades of repression against that country's Nubian people, who here simply tried to celebrate their history and culture."

Nubians, an ethnic minority, trace their roots back to an ancient civilisation in southern Egypt. They have endured a series of displacements by dams since 1902, with the first being under British rule and the last in 1963-64, with the Aswan High Dam.

Article 236 in Egypt's 2014 constitution guarantees a right of return for Nubians to their original territories within ten years, by 2024. However, Sisi has since issued two decrees that have thwarted these plans.

Egyptian authorities announced in October 2016 that the land was for sale to Egyptian and foreign investors, as well as farmers.