Saudi Arabia resumes airstrikes on Yemen, as ceasefire comes to an end The strikes targeted the Houthi-held presidential palace and army bases belonging to troops loyal to former Yemeni president Ali Abdullah Saleh who are allied with the Houthis.

UN envoy to Yemen Ismail Ould Cheikh Ahmed has called for an extension of the humanitarian ceasefire.

“I call on all parties to renew their commitment to this truce for five more days at least,” he said, speaking from Riyadh. “This humanitarian truce should turn into a permanent ceasefire.”

Despite the temporary truce, fighting continued between the Houthis and pro-government forces across southern Yemen.

In the meantime, the second day of the three-day meeting of Yemeni political parties resumed in Riyadh, which was attended by 400 delegates including President Abd Rabbuh Mansour Hadi who had fled to the Saudi capital in March.

The meeting is aimed at finding a solution to end the crisis in Yemen, but the Houthis boycotted the event, saying that it must be held in Yemen instead.

A resolution draft was handed out on the first day of the meeting, calling for a return to the transition path and legitimacy, as represented by Hadi’s rule.

In his opening speech, Hadi vowed that the Houthis will be defeated, and that Yemen will return to security and stability.

Yemen has witnessed an escalation in turmoil since the Houthis took over the capital Sanaa last September and dissolved parliament.

Riyadh said its air campaign was in response to appeals by Hadi, who had called for military intervention against the Houthis before fleeing from Aden.

Clashes on the ground, in addition to the airstrikes, have devastated much of the country, which is in desperate need of humanitarian aid. The UN put the death toll at 1,600 people, and expressed concern over the high number of civilians killed.

A statement released by the UN’s children agency said that humanitarian assistance is being distributed to different health centres to help the hundreds of thousands of children and civilians affected by the conflict.

However, the distribution of aid in the south “has been slow as a result of the continuing violence”.

Much of the south of Yemen has borne the brunt of the fighting. Al-Khader Laswar, the health chief in Aden, said that 517 fighters have been killed in the city in the past 50 days.

He added that 3,461 people were wounded in Aden and that most hospitals in the city were currently out of service as most medics have fled. In the southern province of Shabwah, an al-Qaeda-affiliated militant group claimed on Sunday that it had killed 31 Houthi fighters.

The Yemeni government says al-Qaeda remains active in several parts of the country’s south, from which it stages sporadic attacks on security personnel and Houthi militants. 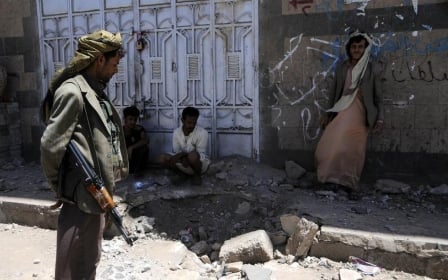