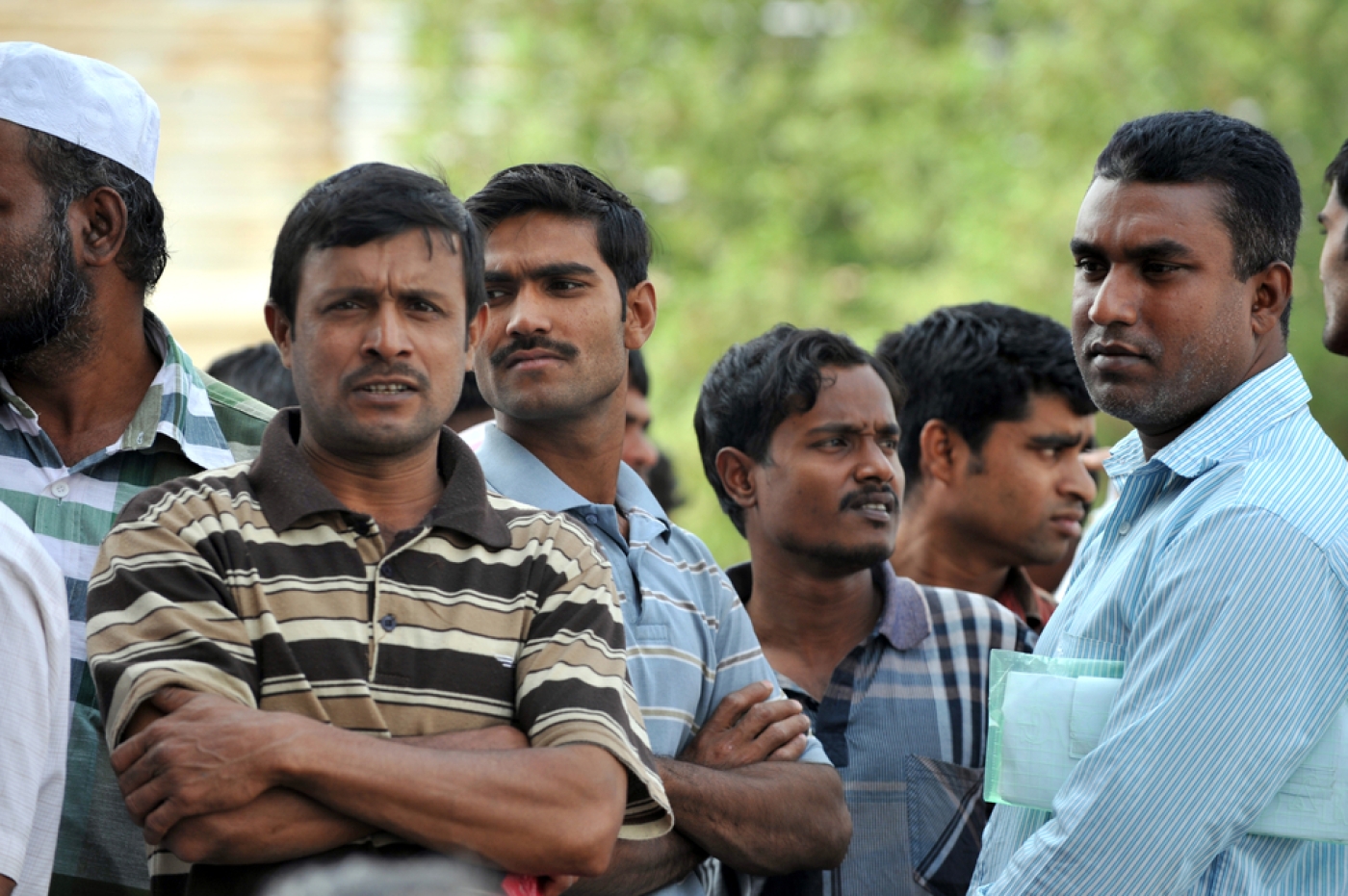 Pakistani workers in Saudi Arabia have been left stranded and destitute after not being paid for months by companies who say they have no money, Middle East Eye can reveal.

Several Pakistanis living in cities across the oil-rich kingdom told MEE that employers have not paid tens of thousands of foreign workers for months, and that the situation is becoming increasingly desperate.

He has worked for eight years as a health and safety officer for construction giant Saudi Oger, one of the kingdom’s largest private companies, which owes employees $800m in pay.

Saudi Arabia posted a record $98bn budget deficit in 2015, mainly due to falling oil prices. Many of the kingdom’s construction projects have been suspended or cancelled as a knock-on effect.

Khan, who lives in the port city of Jeddah, says he is one of 50,000 Saudi Oger employees who have not been paid since last summer.

He lives in a work camp where his rent is the equivalent of $133 a month. But after eight months without pay, has now relies on friends for accommodation and food costs.

Crucially, as with many foreign workers in Saudi Arabia, Khan sends most of his monthly earnings back to Pakistan, which provides critical financial support for his wife and five children.

With no money coming in, Khan says his family is suffering and that his wife has had to sell all her jewellery so their eldest son can go to university this year.

“But there is nothing left for my other children to sell,” he told MEE. “My wife and children are suffering now – I don’t know what we are going to do.”

In July the State Bank of Pakistan reported that Saudi Arabia was the largest source of foreign remittance payments for the country - worth more than $19.9bn in the 2015-16 financial year.

More than 1.6 million Pakistanis travelled to Saudi Arabia for work between 2011 and 2015.

“I came to Saudi to give my children a better chance in life,” Khan said. “Before everything was good, but now I’m not getting paid and my life has turned into a nightmare.”

Not only is Khan now penniless, he is also trapped in Saudi Arabia, as he cannot leave without raising enough money for a flight home – and he doesn’t want to leave without being paid for work done.

“We can’t leave the country,” he said. “We have no money for tickets and we are waiting for our money. If I get my money I will leave this country and I will go to Canada or America.”

Vani Saraswathi, from the campaigning organisation migrant-rights.org, told MEE that foreign workers across the Arab Gulf States often face employment problems, but that the toughest to resolve are in Saudi Arabia.

“There is absolutely no civil society space. The country is so large, a lot of the problems occur away from the main cities. So workers find it difficult to access even the consuls or missions,” she said.

“The lack of legal aid in all of the GCC (Gulf Cooperation Council) is a huge issue, and particularly so in a place like Saudi Arabia.

“Providing food and helping with repatriation is seen as a resolution. But most of these workers would have paid heavy recruitment fees - and borrowed to do so - so going back without their dues is far from a resolution. It’s just deferring their angst from one country to another.”

Last week King Salman ordered Saudi Oger to pay their employees, after it emerged Indian authorities had moved to feed 10,000 of their citizens, who had lost their jobs and been left starving in the kingdom.

Despite the royal accord, Khan feels no closer to being paid. Saudi officials have repeatedly failed to deliver on promises that the company will pay up, he said.

“Some Saudi officials have come and told us we will get money,” he said. “But they have been saying this for three months – so far we haven’t received one riyal from them.”

With temperatures soaring above 40C, the situation is swiftly becoming more than financial; Khan warned that it is developing into a serious humanitarian crisis.

He said water and electricity to the workers’ camp was cut for months, but that Saudi authorities recently reconnected power, providing much needed relief in the summer heat.

However, tempers were running high among the workers.

“People have no food and no money,” he said. “If the situation doesn’t change soon people will start dying. The workers are very angry.”

In June it emerged that 150 Saudi Oger employees had protested outside the company’s offices in Jeddah by setting fire to vehicles.

It was not the first time unpaid staff had set alight company vehicles; In May workers at the BinLadin Group construction company also set fire to buses in protest at not being paid.

The pressure of not being paid has led to at least one Pakistani worker taking his own life.

Sajjad Binalis, 33, from Islamabad, told MEE his friend Shahid Iqbal hanged himself in his room in the west coast city of al-Abwa on 31 July after not being paid for three months.

Pakistani newspaper, the Tribune Express, reported Iqbal’s death, stating that he had taken his own life because his family was struggling in Pakistan due to missed remittances.

Binalis himself has been in Riyadh since June last year, working as a surveyor for health company Semac. But four months after arriving, the company stopped paying him his monthly $1,333 salary.

Binalis has a wife and two children in Pakistan who rely on his money, but he has now run out and is at a loss about what to do. He went to the Pakistani embassy to ask for help but he said they told him his problem was simply one faced by many workers across the kingdom.

Binalis sent MEE a video he said is of him and several colleagues pleading with their manager to pay their salaries. In the footage, the manager said they will be paid “next week”, to which the Pakistani workers reply: “You always say next week.”

“I asked for just one month’s salary and I said I would go back to Pakistan,” Binalis told MEE by telephone from Riyadh. “But my boss said the company has no money.”

Khan and Binalis said they are desperate to leave Saudi Arabia, but both are intent on getting their unpaid salaries before leaving.

Khan said he “needs his money and then he will leave”. Binalis said it is “better” for him to go back to Pakistan, but that he needs to be paid.

Both want to leave sooner rather than later because of scare stories in which Pakistanis have ended up nearly starving to death on the streets.

Saddam Hussein, 21, from Sialkot in eastern Pakistan, returned from Saudi Arabia last week. A year ago he went to Riyadh on the promise of working on a building site for a monthly salary of $533.

But after three months of being in the Saudi capital, the company stopped paying him, and his manager told him to leave his accommodation.

“They said there was no salary,” he said via telephone from Sialkot. “They told us to leave our accommodation or the police would come.”

Along with three other Pakistanis, Hussein was forced onto the streets, where for nine months their only source of food and water was from a local mosque.

“We just sat in Riyadh. We had nothing,” he said, adding that all they ate was leftover dates at the mosque.

During this year’s hajj, Hussein decided to go to Mecca, where police arrested him, leading to his eventual deportation last week back to Pakistan.

Despite being back home, Hussein said his Saudi nightmare isn't over.

“I am still being chased to pay recruitment fees and costs,” he said.

Mohammed Barr, 32, from Peshawar on Pakistan’s border with Afghanistan, told MEE he thinks it isn’t just a financial crisis that has led to foreign workers not being paid in Saudi Arabia.

“They are trying to get foreigners out of Saudi Arabia – they have increased the cost of ID cards and companies are not paying us our salaries,” he said, from Medina, in west Saudi Arabia.

Barr has worked in Saudi Arabia for the past 10 years as an IT technician for the small local company Alwan Alastora.

Barr added that sponsors in the kingdom, which are required in order to gain a work visa, are taking as much as 20 percent of an employee’s monthly salary.

He hasn’t been paid in six months but even prior to that, his sponsor would take $133 out of his pay packet each month.

Like so many others, Barr said he went to Saudi Arabia because there are no jobs in Pakistan, and the oil-rich kingdom offered salaries that could transform his family’s life.

Barr is unmarried but he said his salary has supported his mother and father back home in Peshawar, and that him not being paid has put extreme pressure on their lives.

“They are struggling without my money,” he said. “I don’t know how long they can survive without me sending them anything.”

All of those interviewed said they believed neither the Pakistani nor the Saudi authorities have done enough to help them.

“The Pakistani embassy is not helping. And the Saudi authorities don’t listen to foreigners,” Barr said.

He also wants to fight for his unpaid salary, but he said, foreign workers need help from the international community.

“We need people to listen,” he said. “No one is doing anything and no one here will help us.”

None of the companies mentioned returned repeated calls for comment.

Mohammed Barr's name has been changed at the request of the interviewee, out of fear of retribution in Saudi Arabia. 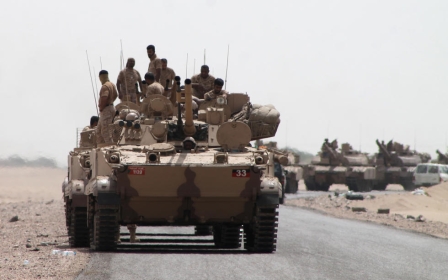