The new list contains 18 entities, including organisations and individuals in Yemen and Libya Qatar said on Wednesday that a new blacklist released by Saudi Arabia and its allies came as a "disappointing surprise" in a diplomatic crisis that has split the Gulf.

The four Arab governments named nine organisations and nine individuals on Tuesday that they accused of links with "Islamist extremism" and Qatar.

The move by Saudi Arabia, the United Arab Emirates, Egypt and Bahrain came despite mounting international pressure to compromise in their weeks-old boycott of their fellow US ally.

A disappointing surprise that the blockading countries are still pursuing... their smear campaign

Saif bin Ahmed al-Thani, a Qatari government spokesman, said the blacklist had no basis in fact and was aimed at stripping the emirate of its sovereignty.

"It comes as a disappointing surprise that the blockading countries are still pursuing this story as part of their smear campaign against Qatar," he said.

"This latest list provides further evidence that the blockading countries are not committed to the fight against terrorism.

"All individuals with links to terrorism in Qatar have been prosecuted. We encourage the blockading countries to spend less time on drafting these fabricated lists and more time on implementing measures to counter the threat of extremism in their own countries."

Libyan based militias, organisations and individuals accused of terrorist actions and links to Qatar were also included in the new list.

Qatar and its neighbours support different sides in the ongoing Libyan civil war, with Qatar supporting militias that back the unity government.

The UAE has supplied the rival forces of Khalifa Haftar with arms, something the UN has said is in violation of UN sanctions.

Saudi Arabia has been leading a military intervention against Shia militants in neighbouring Yemen since March 2015.

The four governments issued a previous blacklist of 59 individuals and 12 groups last month. Sheikh Saif said it had been "widely rejected by the international community".

Saudi Arabia and its allies have been boycotting Qatar since 5 June in the region's worst diplomatic crisis in years.

They sealed the emirate's only land border, ordered its citizens to leave and closed their airspace and waters to Qatari flights and shipping.

They demanded that Qatar break its longstanding ties with the Muslim Brotherhood, blacklisted as a "terror group" by the four governments although not by the international community.

They also demanded that it close Al Jazeera and a Turkish military base, and fall in line with Saudi-led policy in the region, particularly towards Iran.

Qatar has dismissed the demands as a violation of its sovereignty and has received significant support from its ally Turkey.

The recent visits of Turkish President Recep Tayyip Erdogan to Saudi Arabia, Qatar and Kuwait, which has been mediating in the dispute, failed to ease tensions.

The US secretary of state, Rex Tillerson, who last week spent four days in the region trying to broker a settlement of the crisis, has voiced satisfaction with Qatar's efforts to address any suspicion of terror funding.

But after talks with EU diplomatic chief Federica Mogherini on Tuesday, the Egyptian foreign minister Sameh Shoukry warned that the four governments would accept no compromise in their dispute with Qatar. 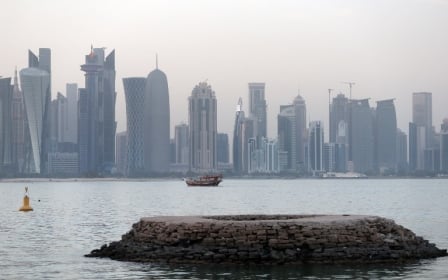