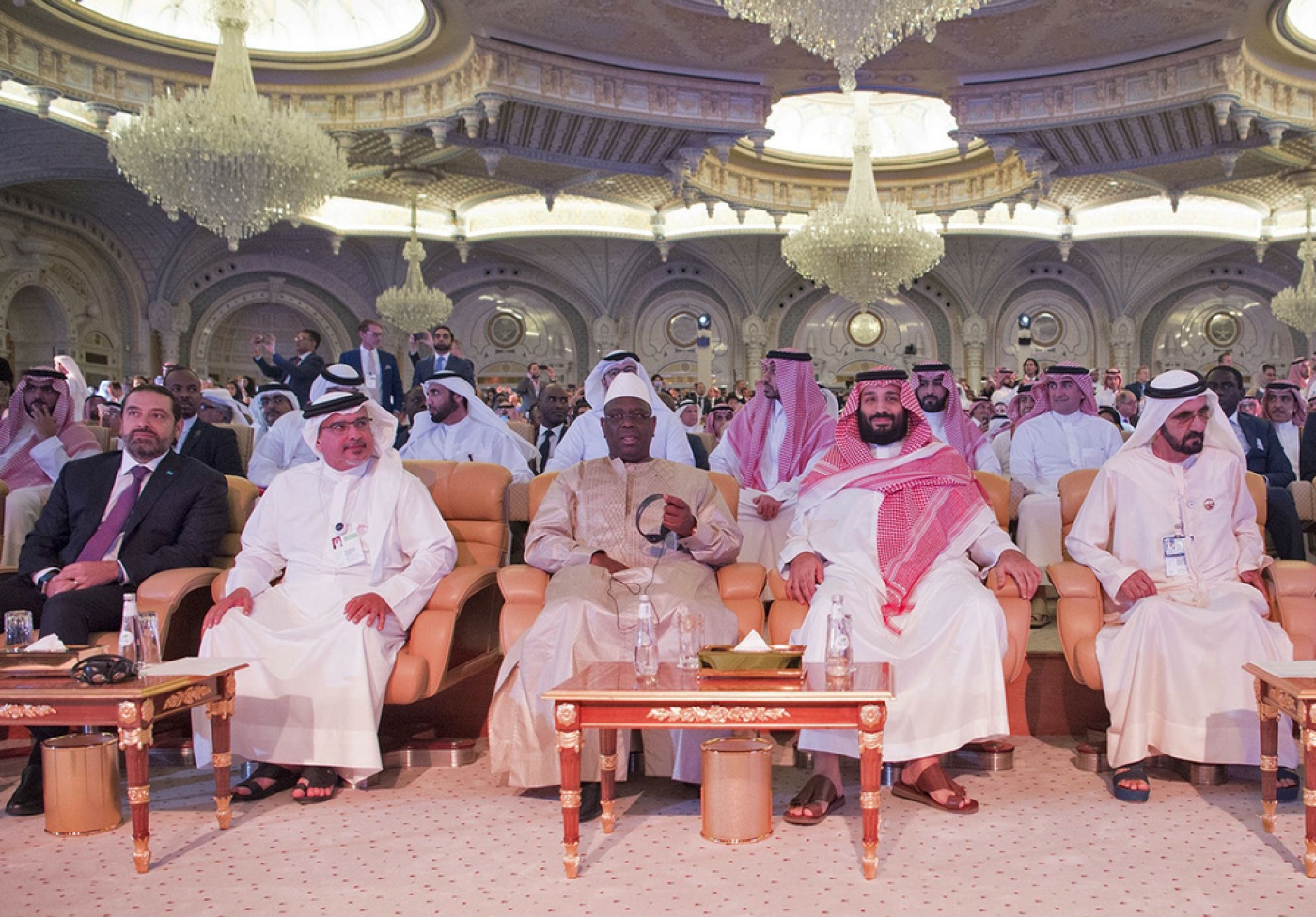 In November, Hariri, far left, said he was stepping down in a televised address from Riyadh, causing observers to speculate he was being held against his will (Bandar AL-JALOUD/Saudi Royal Palace/AFP)
By
MEE and agencies

Hariri "will be staying in the kingdom for two more days, so I hope there are no rumours of his abduction,"  the prince said while addressing the Future Investment Initiative forum in Riyadh.

MBS burst out laughing and shook hands with a smiling Hariri, who sat next to him on stage, as the audience also erupted in laughter on Wednesday.

The joke came as MBS faces global outrage over the murder of Saudi journalist and government critic Jamal Khashoggi at the kingdom's consulate in Istanbul.

On Tuesday, US President Donald Trump intimated for the first time that MBS could have been involved in the mission to kill Khashoggi, stating that "the prince is running things over there".

For David Wearing, a lecturer at Royal Holloway University in London, bin Salman's joke about Hariri was ill-advised given the current context, and tied the crown prince's line to the controversial meeting on Tuesday between King Salman, MBS, and Khashoggi's son.

"What MBS doesn’t realise is, to outside audiences, not just in the West, but in the Middle East and internationally, people will look at that and think that's just sinister," he told Middle East Eye on Thursday.

"The Saudis obviously thought that would show them in a good light. But it was absolutely macabre… It makes them really look sinister and cruel and it’s a sign of their total lack of judgement."

Saudi Arabia has long been a key ally of Hariri, while Riyadh's regional foe Iran backs the Lebanese movement Hezbollah.

But in November last year, Hariri announced he was stepping down in a televised address from the Saudi capital, causing observers to speculate he was being held against his will.

After French mediation, he rescinded his resignation the following month, and Saudi Arabia has denied intimidating Hariri into quitting his post.

Hariri was named premier for a third term in May after Lebanon's first parliamentary elections in nine years, but has since struggled to form a cabinet.

Hariri, a dual Saudi citizen, has thrown his support behind MBS over the Khashoggi killing.