Two US citizens held in Yemen are released, flown to Oman with wounded Yemenis 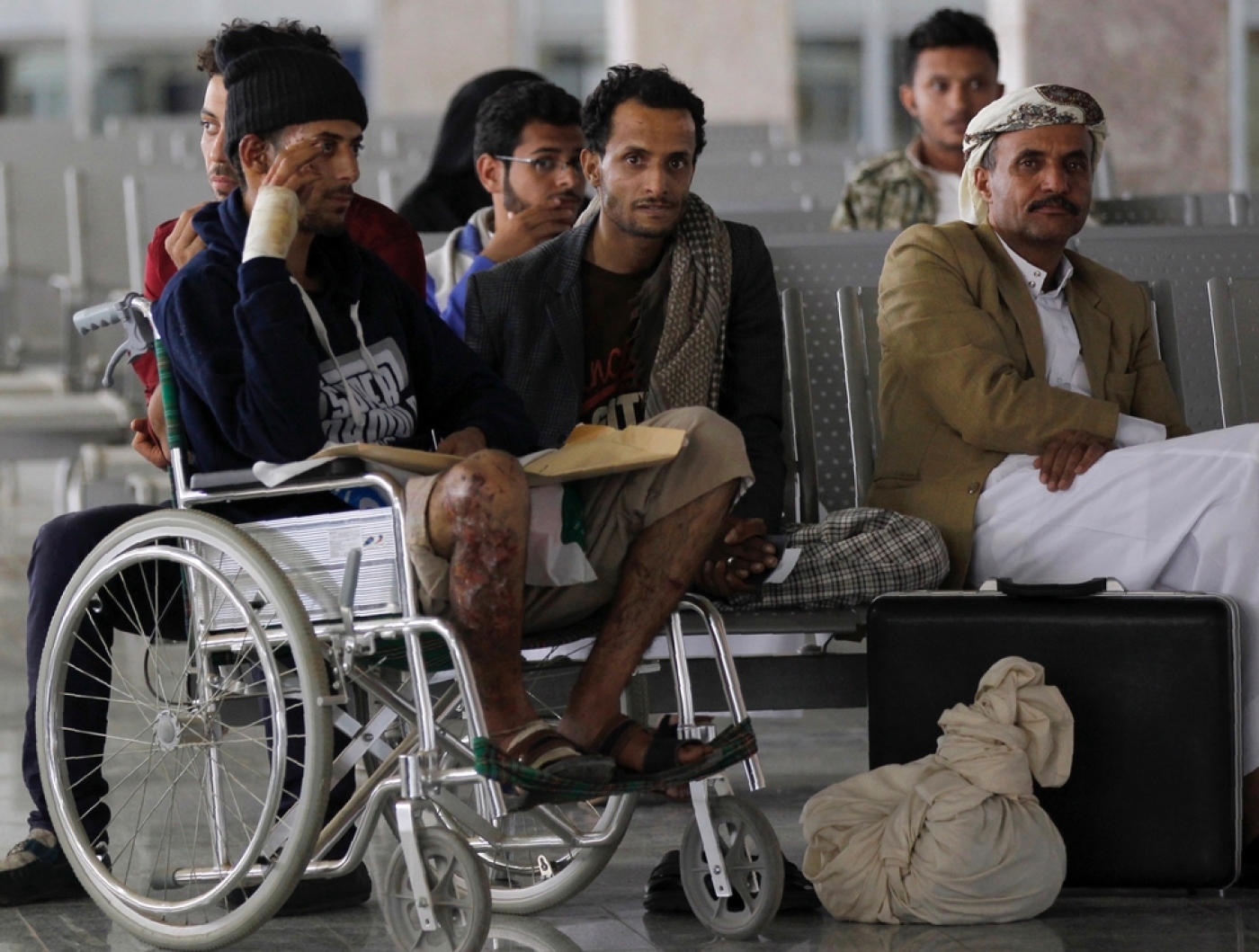 Yemeni men wounded in Saudi-led air strike in airport in Sanaa on Saturday, as they wait for Omani plane to evacuate them (AFP)
By
MEE and agencies

The Saudi-led coalition battling Yemeni rebels said on Saturday that one of its warplanes had "wrongly targeted" a funeral in the capital Sanaa, killing more than 140 people, and announced disciplinary measures.

The announcement came as an Omani aircraft evacuated from Sanaa more than 100 of the most seriously wounded in the 8 October strike, which wounded at least 525 people and sparked international condemnation.

Muscat also said that it had mediated the release of two American citizens held in Yemen and flew them to Oman on Saturday night on the same relief flight.

US Secretary of State John Kerry welcomed the release but said it was too early to reveal their identities.

The Omani aircraft also flew home Sanaa rebel negotiators who had been stranded in Muscat since the collapse of UN-brokered peace talks in Kuwait in August because of the air blockade, an AFP photographer reported.

A member of the six-nation Gulf Cooperation Council, Oman has good ties with Yemen and is the only GCC country not to have joined the Saudi-led coalition.

The team investigating the funeral raid said a coalition aircraft "wrongly targeted" the ceremony based on "incorrect information".

The 14-nation Saudi-led inquiry, carried out by the Joint Incidents Assessment Team, said coalition aircraft were wrongly told that the funeral hall was full of Houthi leaders, according to the BBC.

It said "a party affiliated to the Yemeni presidency of the general chief of staff" was to blame.

The inquiry also apportioned blame to the Air Operation Center in Yemen for directing aircraft onto the target without obtaining approval from the coalition's command, the BBC said.

"Appropriate action... must be taken against those who caused the incident, and... compensation must be offered to the families of the victims," the inquiry said.

It also called on coalition commanders to change their procedures to prevent any repeat of the failings that led to the strike.

The coalition initially denied responsibility but ordered an investigation after Western condemnation, including from Saudi Arabia's closest allies.

A statement from the coalition said it accepted the results of the investigation and expressed "its regret at this unintentional incident and the ensuing pain for victims' families".

The strike was one of the deadliest in the coalition's 19-month-old bombing campaign in support of Yemen's beleaguered government.

More than 6,700 people have been killed in the impoverished Arabian Peninsula country since the coalition first intervened, nearly two-thirds of them civilians, according to the United Nations.

The alliance has come under increasing international scrutiny over civilian deaths.

Britain is to present a draft resolution to the UN Security Council next week calling for an immediate ceasefire in Yemen, after an earlier text condemning the funeral bombing was rejected by Russia as not strong enough.