Yemeni soldiers, supporters of the Houthis, march during the funeral of a Military leader killed in the province of Hodeidah, northern district of Abs, Hajjah governorate (AFP)
By
MEE and agencies

The Saudi-led military coalition in Yemen has sent more than 10,000 troops towards a strategic rebel-held port city ahead of a new assault, Yemeni government officials said on Tuesday.

The pro-government coalition deployed the reinforcements to the Red Sea coast ahead of a new offensive on Hodeidah that will be launched "within days", a military official told the AFP news agency.

He said they would also "secure areas liberated" from the Houthi rebels, and that forces from Sudan, part of the coalition, had moved in to "secure" areas around the city.

Houthi rebels have for the past 10 days been stationing fighters on rooftops of buildings in Hodeidah city, government military officials told AFP.

The adjacent port is the entry point for three-quarters of imports to the impoverished country, which is teetering on the edge of famine.

Saudi Arabia and its allies intervened in Yemen in 2015 to support President Abd Rabbuh Mansour Hadi's government after the Houthis ousted it and took swathes of territory including the capital Sanaa.

The coalition has used air power to push the rebels back from much of Yemen, but the Houthis have held onto Hodeidah and Sanaa.

After UN-backed talks collapsed in September, the coalition announced it was relaunching an assault on Hodeidah.

The fighting has since eased and Saudi-led forces have focused their raids on the city limits and other parts of the surrounding province.

But last week strikes in the province killed dozens of civilians, as the Houthis blamed aerial bombardment by the Saudi-led coalition.

The coalition has drawn heavy global criticism for the high civilian death toll from its campaign in Yemen.

According to new information released by an independent research group on Monday, at least 56,000 people have been killed in armed violence in Yemen since January 2016, a tally that is more than five times higher than previously reported.

The new figure encompasses the deaths of both combatants and civilians in Yemen between January 2016 and 20 October 2018, explained Andrea Carboni, a research analyst at the Armed Conflict Location & Event Data Project (ACLED).

It does not take into account the Yemenis who have died as a result of the humanitarian crisis engulfing the country and its related problems, such as diseases and malnutrition.

"The fatality numbers refer to the number of people that were killed as a direct consequence of armed violence," Carboni told Middle East Eye on Monday.

That violence includes air strikes and artillery fire from Saudi-led coalition forces currently fighting in Yemen, as well as armed clashes between various factions fighting inside the country, including the Houthis. 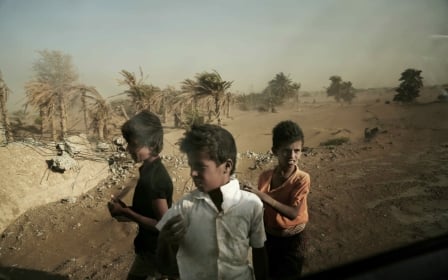