Son of late King Abdullah, once considered a future crown prince, is one of highest profile royals targeted by Mohammed bin Salman's purge Prince Miteb, pictured here in 2007, had been among detainees held at Riyadh's Ritz-Carlton hotel (AFP)
By
MEE staff

Two senior Saudi princes have been released after more than three weeks in detention as part of Crown Prince Mohammed bin Salman's elite purge, according to sources.

Saudi Prince Miteb bin Abdullah, the former head of the National Guard, was released after being arrested as part of a crackdown on alleged corruption among senior Saudi officials.

The princes were among dozens of detainees who had been held at the Ritz-Carlton hotel in Riyadh.

However, the sources said there may be conditions on the release; whether Miteb has the freedom to move or travel is still unclear.

Early on Wednesday, Reuters cited a Saudi official as saying that Miteb paid more than $1bn in a corruption settlement that led to his release.

Three other members of the royal family have also finalised similar agreements with the authorities, according to the official.

Last week, bin Salman told the New York Times that 95 percent of officials accused of corruption avoided arrest by agreeing to make payments to the state treasury. Bloomberg also reported that detained members of the royal family are negotiating financial settlements to secure their freedom.

MEE understands that negotiations are under way for the release of Prince Al-Waleed bin Talal, one of Saudi Arabia's most high profile and wealthiest tycoons who has been an investor in companies including Rupert Murdoch's Newscorp, Citigroup, 21st Century Fox and Twitter.

Earlier this month, MEE reported that Miteb was tortured along with five other princes when he was being interrogated in Riyadh during the ongoing political purge in the kingdom.

All six princes were admitted to hospital in the 24 hours following their arrest. One of the men had to be admitted to the hospital’s intensive care unit - normally indicative of a high risk to the life of a patient, such as organ failure.

Both Miteb and his brother were among dozens of royal family members, ministers and current and former senior officials who were rounded up in a graft inquiry at least partly aimed at strengthening the power of bin Salman.

Prior to the ascension of King Salman to the throne, Prince Miteb was tipped to be crown prince and the next king of Saudi Arabia.

Trained at Sandhurst military academy in Britain, he is the son of the late King Abdullah. 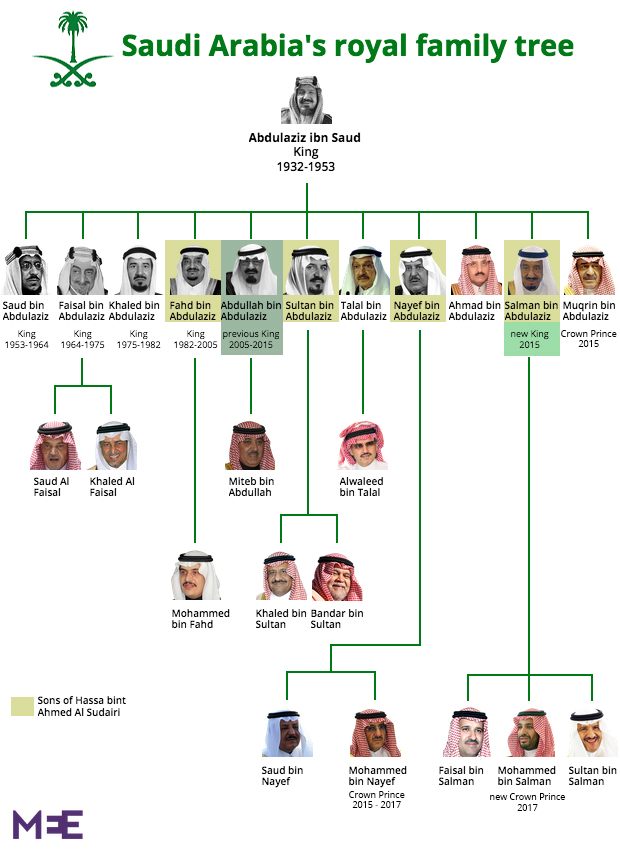 He was also the last remaining member of the Shammar branch of the Saudi royal family to retain an important position within the government.

Saudi sources corroborated messages posted on Twitter by royal family members who had posted about the release of both Prince Miteb and his brother.

"Almighty, thanks be to you..." wrote Abeer bint Khaled bin Abdullah in a posting on her Twitter account. Posting an apparent file photo of Prince Miteb, she added: "May God give you long life, long life full of health, and keep you for us."

Writing on his Twitter account, Moaid Mahjoob, who identifies himself as director of external relations for Princess Jawahar Al-Saud, another Saudi royal family member, said Prince Miteb "had been released and that he was at his home in Riyadh".

Another royal family member, Princess Nouf bint Abdullah bin Mohammed bin Saud, also posted a similar message on Twitter, writing over a photo of Prince Miteb: "May you be safe for us, Abu Abdullah."

Miteb headed the Saudi National Guard, an elite internal security force originally based on traditional tribal units that was run by his father for five decades.