Saudi soldiers fire at Yemeni protesters in al-Mahrah, killing one 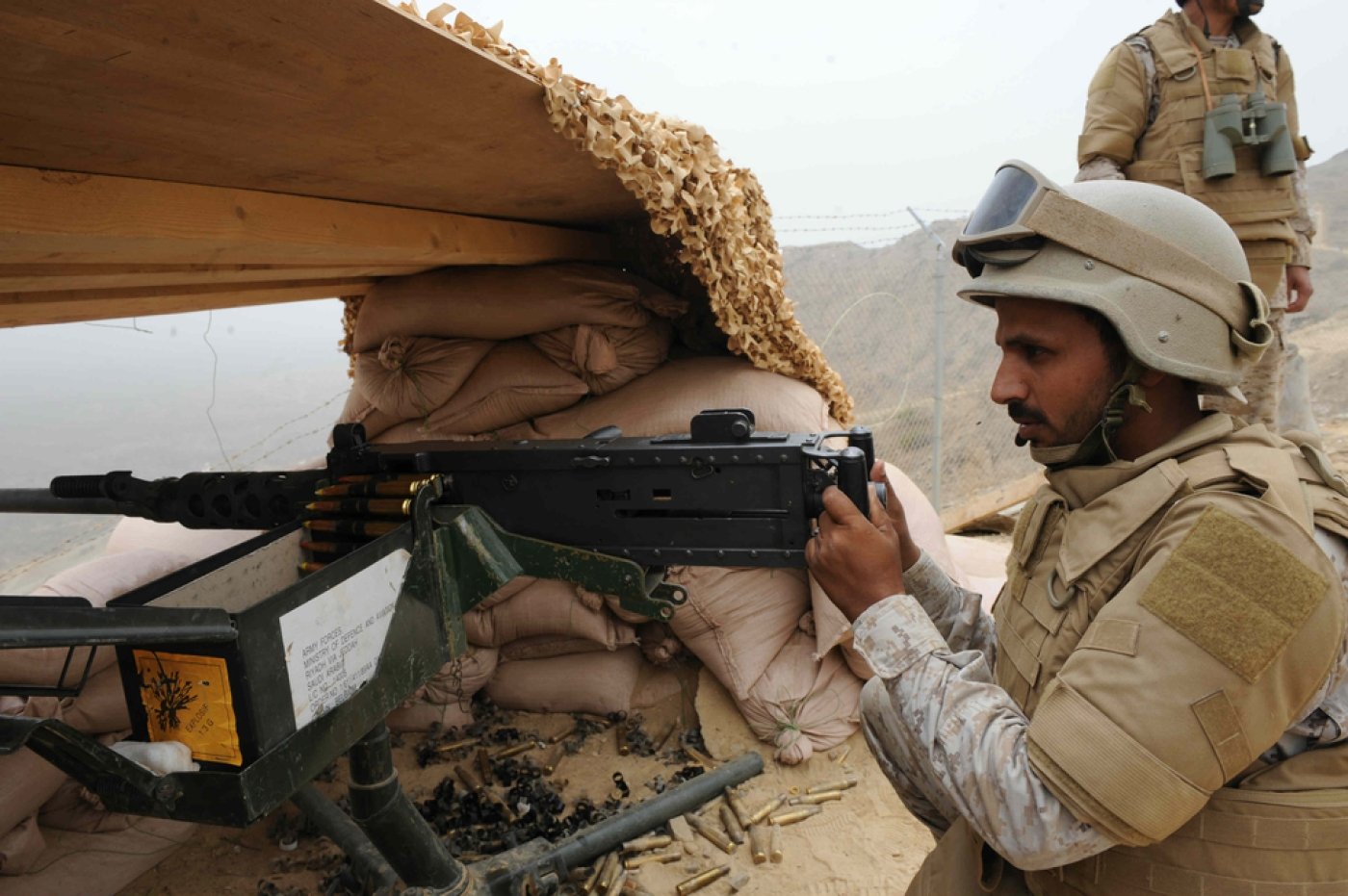 A Saudi soldier is stationed at a look-out point at al-Dokhan mountain on the Saudi-Yemeni border, in southwestern Saudi Arabia. (AFP)
By
MEE correspondent

TAIZ, Yemen - Saudi soldiers fired at Yemenis demonstrating against their presence on Wednesday in the eastern province of al-Mahrah, killing one person.

Al-Mahrah’s residents have been protesting for two days over new checkpoints erected by Saudi forces in the Yemeni province.

The protests are part of a wave of demonstrations calling for the Saudis to withdraw from al-Mahrah that have flared up regularly over the past year.

Wednesday’s protest marked the one-year anniversary of Saudi forces entering the province, whose residents insist is a peaceful place. They see Riyadh’s presence as malign and colonial.

Early Wednesday morning the Saudi forces tried to set up a new military checkpoint west of the al-Anfaq (tunnels) area, near Nishtawn seaport.

The Saudis have placed checkpoints and military bases across the province, and dozens of residents gathered around the new checkpoint in an attempt to stop it being set up.

In return, the Saudi and Yemeni soldiers there fired on the protestors, killing one man named Nasser Kalashat and wounding three others. 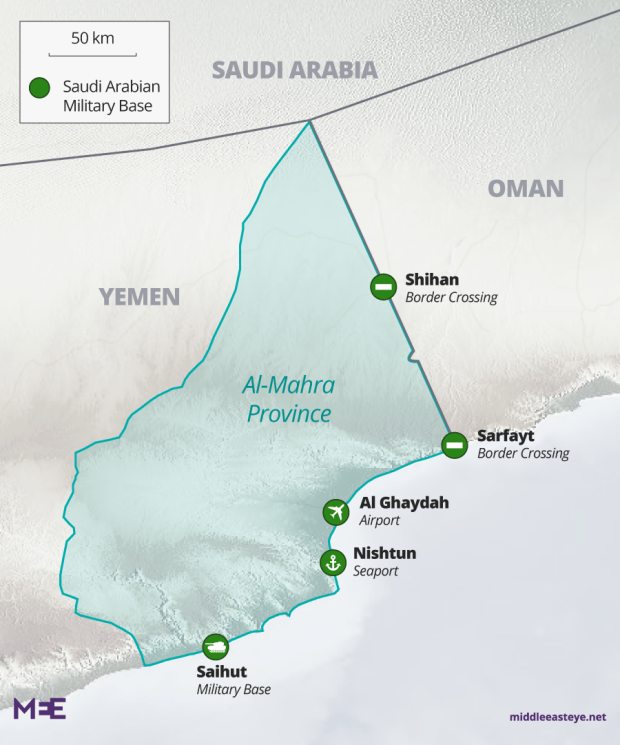 Najeeb Mohammed, a Yemeni who participated in the protests, told Middle East Eye there is now a sit-in where Kalashat was killed.

He said the tribes of al-Mahrah will now escalate their opposition to the Saudi presence.

"Early this morning, we went to peacefully stop the new checkpoint being set up, but the Saudi forces shot at us randomly and they killed one and wounded three others," Mohammed told MEE.

The wounded are suffering from critical bullet wounds, Mohammed said, and may die any moment.

When foreign forces impose their presence in another country by force, that means the country is being invaded, nothing else

After the Saudi forces opened fire the protestors all withdrew, he said.

"This immoral behavior of the invaders [Saudis] is typical of their savage treatment of al-Mahrah residents, and they consider themselves to be the main residents of the province," Mohammed said.

In response, al-Mahrah’s tribes held a meeting to discuss steps of escalation and ways to react to Kalashat’s killing.

"We will not betray the blood of Kalashat, and the protest leaders are discussing the proper reaction with the tribes of al-Mahrah. Soon we will react in the proper way," Mohammed said.

"When foreign forces impose their presence in another country by force, that means the country is being invaded, nothing else."

Faced with growing local discontent, in June the Saudis promised to hand all bases and facilities in their control over to Yemeni forces and exit the province within two months.

For a time the protests were quelled, but by September it became clear that the Saudis were going nowhere. If anything the Saudi presence had grown.

In the wake of the shooting, the Saudi-backed governor of al-Mahrah, Rajeh Saeed Bakrit, accused the protestors of being arms smugglers and mercenaries linked to the Houthi rebel group.

He said on Twitter: "The al-Anfaq [tunnels] checkpoint has been fired upon by outlaws, arms and drugs smugglers, backed by the coup [the Houthis] and regional countries to facilitate smuggling operations from the sea."

Riyadh has said on several occasions that it has serious concerns about the Houthis smuggling weapons through Oman, which borders al-Mahrah to the east, and this is the main pretext of the Saudi presence in the province.

"They have been dealt with firmly and anyone who wishes to tamper with the security and stability of the country will be beaten with an iron fist", Bakrit said.

The Saudis’ killing of a protestor has sent a chill down the spines of many Yemenis.

"Its people are steadfast in peace and refuse to transfer chaos to the province. Respect the wishes of the people of the land and stop being dragged behind Saudi recklessness."

A security source in al-Mahrah told al-Mahrahpost news website, which is based in the province, that the governor himself ordered the forces to shoot the protesters.

"Some officers tried to persuade Bakrit to retract from this step, which does not serve the security and stability of the province, but he took the decision on his personal responsibility," the security source told al-Mahrahpost.

According to the protestor Mohammed, al-Mahrah’s residents believe the governor is a Saudi tool, so they do not take his statements seriously.

"If not for the governor, the Saudis would not have come to al-Mahrah, but he is the governor who facilitates their presence," Mohammed said.

"The governor is a main enemy of al-Mahrah."

The Saudis do have their supporters in the province, however.

Salmeen, a resident sympathetic to the Saudis who wished to be identified only by his first name, said the soldiers only confronted the protestors after the checkpoint came under attack.

"When the Saudis saw hundreds of people are coming towards them, and some of them had weapons, the Saudis confronted them by shooting," Salmeen told MEE.

"I do not dare to tell the truth, but I think the Saudis were forced to protect themselves from the protesters who were angry".

Salmeen is just one of a handful of people in the province who see self-defence in the Saudi soldiers’s actions, and even supporters of the governor have refrained from pushing this narrative.

A source in al-Mahrah’s local authority in al-Mahrah confirmed to MEE that Wednesday’s developments unified many local leaders and sheikhs against the Saudi forces.

"The death of Kalashat is the spark of revolution against the presence of Saudis in al-Mahrah and there will be an unexpected reaction to his death," the source told MEE.

Not only sheikhs and leaders but also some officials did not accept the Saudis’ behaviour, the source said.

"Even some employees in the office of the governor himself did not welcome the statement of the governor, as he supported the Saudis against the residents of al-Mahrah."