Scared, worried and hopeful: A Sudanese photographer's view of the uprising

Lana Haroun took a picture that became a symbol of the Sudan protests. She tells MEE how photography is an integral part of her activism 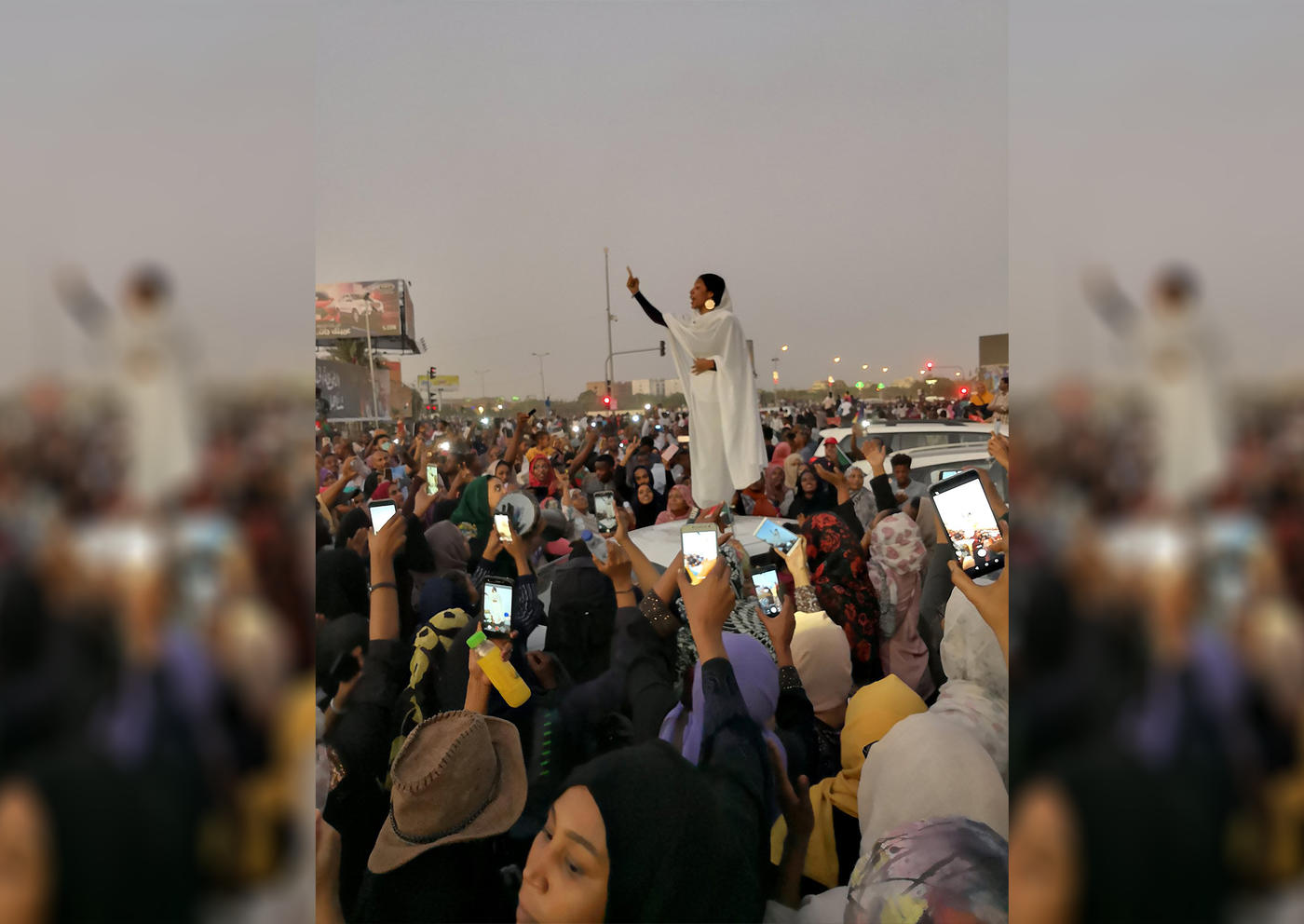 Through almost four months of protest, photos from the streets of Sudan were rare. Aside from avid observers, few had access to visual documentation of the movement trying to force three-decade ruler Omar Bashir from power.

All this changed last week with the photograph of 22-year-old student Alaa Salah.

Lana Haroun, a musician and photographer, captured the now-iconic image of the young woman, dressed in the traditional Sudanese white tobe, standing atop a car looking out at the crowds and leading them in revolutionary chants.

It is not about the photo ... it is about Sudanese people and Sudan's situation now

"She was iconic. She was different, and because of this I ran towards her to take a photo of her," Haroun told Middle East Eye. "She really looked different, but different in a good way."

Photos of the protests, which began on 19 December, have been sparse for a reason.

Access to the internet has been restricted since the early days of the demonstrations, when Bashir tried to limit the spread of information by censoring newspapers.

Even international news agencies have had limited visual coverage of the demonstrations, with much of what they did publish appearing to have been shot on mobile phones.

Haroun had tried to document the early days of the movement, but said it was difficult because of the nature of the protests.

"I was taking photos from the beginning, but the protesting was very tough, there were a lot guns shooting everywhere, there was tear gas and you had to run here and there," she said. "Because of this you cannot take clear photos."

The situation changed on 6 April, when protesters organised demonstrations around the anniversary of the last successful Sudanese uprising in 1985, beginning a sit-in outside the army headquarters that attracted thousands of supporters.

A notable development that day was the strong presence of soldiers who seemed to be siding with the protesters. In defiance of orders, these troops created a safer environment for demonstrators, defending them on several occasions from other security forces attempting to break up the sit-in.

It was in that environment that Haroun was free to photograph Salah, bringing international attention to protests that had until then barely registered on global news agendas.

"We realised after a very short time that there is no media from the world, from the Arab [world], or even from Sudan standing with our protest," she said.

"Because of my photo, I saw a lot of attention - but it is about my photo, not about the protest."

"This makes me feel very sad," she added. "We went to the street because ... we need the world to focus on our [issues]. It's not about the photo, it's not about Alaa Salah, it is about the Sudanese people and Sudan's situation now." The 6 April sit-in created new pressure on Bashir, and five days later the president was ousted, marking an end to his 30-year rule.

Demonstrators initially celebrated the momentous news, but returned to the streets when the military announced it would be taking control for a two-year "transitional period" instead of immediately handing power to a civilian government.

"I am really proud to be one of the people who tried to rewrite the history of Sudan," said Haroun, who added that protesting gives her more pride than even the global reception of her photo.

She said she had only slept a few hours before she returned to the protest at 6am on Thursday, only to hear soon afterwards the news that Bashir was being ousted.

"It was crazy. The feelings - it's complicated. You cannot imagine. You feel scared, you feel worried, you feel hope. There are a lot of feelings - it's confusion," she said of the atmosphere following the news, as protesters waited for hours for a military statement in the wake of the coup.

Haroun said the army's disappointing announcement angered the Sudanese, but that a nightly curfew, which has since been lifted, and a state of emergency would change little because the momentum would remain with the protesters.

"Everyone was angry because this is not what we want. Everyone was in the street, no one went home," she said.

"No one listened to them because nothing changed, they just kicked out Omar al-Bashir but what about his system? The whole government until now is in his place."

"No one will go home till those guys go," she added.