IS seizes Syria oil field, alleged to have 'secret channels' with Assad Barrels painted in the colours of the Syrian flag in the eastern town of Deir Ezzor on February 7, 2014 (AFP)
By
MEE and agencies

The Islamic State (IS) seized control Thursday of a major Syrian oil field on the Iraqi border, said the Syrian Observatory for Human Rights, amid fresh accusations that IS is selling oil to the Syrian government through 'secret channels'.

By seizing the Al-Omar oil field, IS now controls most oil and gas fields in the oil-rich Syrian province of Deir Ezzor, most of whose countryside is also under its control.

"IS took control of the Al-Omar oil field," located north of the strategic town of Mayadeen, also under its control since dawn Thursday, said the Observatory.

The capture "comes after (Al-Qaeda affiliate) Al-Nusra Front withdrew from the oil field without a fight", the Britain-based monitor added.

Before Syria's 2011 revolt against President Bashar al-Assad broke out, the oil field produced some 30,000 barrels a day.

In November 2013, Al-Nusra Front and its anti-regime allies took over the field and kept it running, "selling 10,000 barrels a day," according to the Observatory.

IS supporters posted amateur video on YouTube, showing a bearded man wearing black Afghan clothes and a black scarf on his head, identified by the cameraman as Commander Hommam.

"We took it (the oil field) over without any fighting," the commander says.

The "regime is playing a dangerous game. For the past ten days it has been bombing areas under IS control, but causing very few IS casualties," the rebel spokesman told AFP.

Syria's war began as a peaceful movement for political change before a brutal government crackdown saw it become a full-blown insurgency, but the conflict became more complex when militants from around the world flocked to Syria.

IS, then known as ISIL, first emerged in Syria's war in late spring last year and was initially welcomed by some Syrian rebels who were desperate for help.

But subsequent abuses quickly turned the Syrian opposition, including Islamists, against the group. 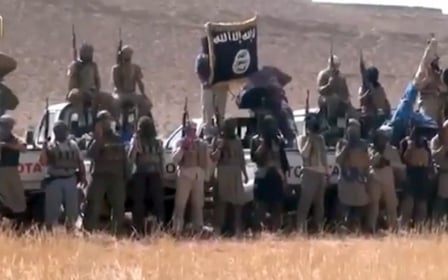