An Iraqi Kurdish Peshmerga fighter takes position on the front line in Bashiqa, a town 13 kilometres north-east of Mosul on 12 August 2014 (AFP)
By
MEE and agencies

Four Turkish soldiers were wounded on Wednesday when militants fired mortars on a training camp near the Iraqi city of Mosul, Turkish officials said, in an attack that was claimed by both Islamic State militants and Shia militiamen.

Two Iraqi volunteers, one of them an officer, were killed in the attack on the Bashiqa camp, where Iraqi anti-IS fighters are being trained with Turkish help.

"We offer condolences to our Iraqi martyr brothers' families and the Iraqi people, and wish the injured a speedy recovery," the Turkish foreign ministry said in a statement.

IS - which counts Mosul as its main Iraqi hub - claimed responsibility for the assault in a statement posted online, although it said it used rockets rather than mortars.

"Soldiers of the caliphate were able to launch 200 Grad rockets," the statement said in reference to the Islamic "caliphate" the militant group has declared in parts of Iraq and Syria.

Powerful Shia militia Ketaeb Hezbollah also claimed responsibility for the attack via its TV channel Etejah, but did not specify how it managed to shell a base located over 100 kilometres north of the northernmost positions held by federal Kurdish forces and allied militiamen.

The Turkish military said it responded to the attack on the camp with fire of its own, adding that the four wounded Turkish troops had been taken for treatment in Sirnak province, on Turkey's side of the border.

"We are pleased to confirm that their condition is stable," a Turkish official told AFP on condition of anonymity, emphasising that the attack originated from IS-held territory.

According to CNN-Turk television, IS militants fired up to 60 mortar rounds over several hours.

One of the Turkish troops was seriously wounded but his life is not in danger, it added.

'Multi-pronged attack' by IS

Iraqi Kurdish officials said the shelling in the Bashiqa area was part of a multi-pronged attack by IS attempting to break through lines held by peshmerga forces in several separate areas around Mosul.

IS used mortars, rockets and car bombs ahead of ground attacks during the assault, which was ultimately foiled, said Jabbar Yawar, the secretary general of the ministry responsible for Kurdish peshmerga forces.

Turkey sparked a bitter diplomatic row with Baghdad earlier this month when it announced the deployment of hundreds of troops to Bashiqa, where it has a long-running training programme for anti-IS forces.

Ankara insists the deployment was routine and necessary to protect the Turkish military trainers, while Baghdad said it was unauthorised and demanded the troops be withdrawn, protesting to members of the UN Security Council.

The Turkish army said on Wednesday's attack "shows once again the importance of security measures for the contingent" in Bashiqa.

In a bid to placate Baghdad, an unspecified contingent of the Turkish troops this week pulled out of the camp and headed northwards.

But the Iraqi government demanded the "complete withdrawal" of Turkish forces from its territory, indicating Ankara's partial pullout was not enough.

By contrast, the deployment has been supported by the Kurdistan Regional Government (KRG) which controls the northern Iraqi region and has excellent relations with Ankara.

KRG officials said on Wednesday that peshmerga forces had repelled a multi-pronged IS offensive in Nawaran, Bashiqa, Tal Aswad, Khazr and Zardik.

"This was an attempt by (IS) to breach peshmerga defensive lines following significant losses in recent months," it said.

"A number of fronts, including Bashiqa and Nawaran and Khazr north and east of Mosul, were attacked by (IS) terrorists this evening," Jabbar Yawar told AFP.

The militants "used car bombs and mortars and rockets and after that launched attacks on peshmerga sites on all of these fronts", Yawar said.

The Kurdish Regional Security Council, which is headed by de facto regional president Massoud Barzani's son Masrour, claimed that more than 70 IS members were killed in the attacks.

That claim could not be independently verified, and the statement provided no indication of possible peshmerga casualties. Iraq at War
What's behind the Iraq-Turkey spat?
David Barchard 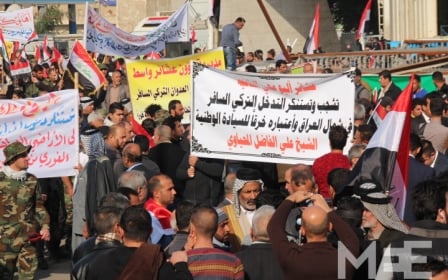