Jordan's government is pushing a campaign to marginalise smoking. But in a country where 60 percent of men light up, it's a tough habit to break 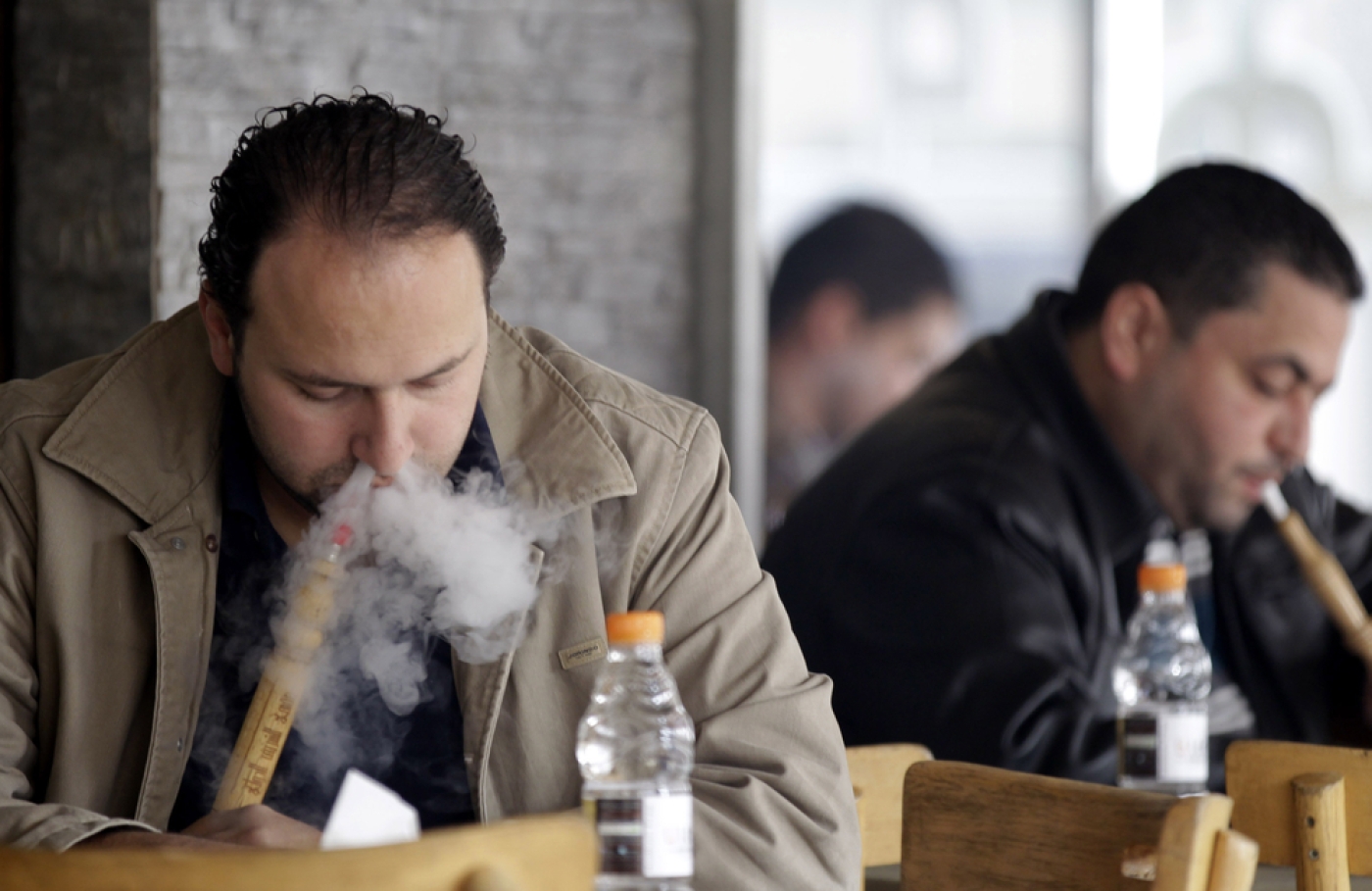 Under new rules, anyone caught smoking in a public place can be jailed for three months and fined (AFP)
By
Bethan Staton

There are no ashtrays in Fatima Khalifeh’s office, in the Jordanian Ministry of Health. The dim scent of cigarette smoke does not cling to the furniture. Unusually for government buildings in Jordan, where most officials are enthusiastic about lighting up at their desks, the no-smoking warnings nailed to the walls seem to be taken seriously.

As the Head of the Ministry’s Tobacco Control Department, Khalifeh is responsible for attempting to reduce the rates of smoking in a country that, by most measures, is solidly hooked on nicotine. In Jordan more than 60 percent of adult males currently smoke some form of tobacco, and counter to trends in the West the rate is going up, not down.

"We can’t say people aren’t aware of the dangers," Khalifeh, who worked as a family doctor before being involved in health policy, says. "They’re aware. It’s just that they don’t have the enthusiasm to stop. But when, like me, you’ve seen a patient that can’t breathe, who’s walking with an oxygen bottle, it’s so hard because you know you can reduce that risk."

Last week, Khalifeh and her team made a step forward in their campaign to marginalise smoking in Jordan, when the Senate approved amendments to the country’s anti-smoking laws.

Under the new rules, anyone caught smoking in a public place is liable for a prison sentence of up to three months and a fine equivalent to nearly $300.

Those responsible for the premises where people are caught smoking illegally could be fined up to $4,500, or even imprisoned for six months.

The introductions are not radically new: on paper, smoking has been banned in public places in Jordan since 2008. But poor enforcement, meagre fines, and a loose definition of ‘public areas’ meant that, in the past, legislation had little effect.

Whether on a university campus, in a cafe or even in Parliament buildings - all of which are affected to some degree by the changes - it’s generally considered acceptable to light up a cigarette indoors.

At the Blue Corner cafe on Amman’s busy Thaqafa Street, the enthusiasm for lighting up is evident. Behind painted glass windows, patrons gather around tables smoking cigarettes and enjoying arguila in the midst of a convivial, sweet-smelling haze.

There’s no sign of a smoke-free area here and customers – mostly young to middle-aged men and women sitting in small groups – seem very happy with the arrangement.

“I don’t smoke cigarettes, just arguila,” Ibrahim, 38, said, referring to the popular waterpipe. A financial worker from Amman, he confessed happily to smoking eight pipes every day, one of which he enjoyed around the remains of a light midday snack.

He said he preferred shisha - a term that can refer both to the tobacco used with the waterpipes and to the pipes themselves - to cigarettes because each smoke could be enjoyed for one or two hours. Smoking one arguila pipe could be equivalent to smoking up to 100 cigarettes.

“That’s my programme every day. I find it’s better for me. I’m relaxed, I feel interested. The arguila is my friend.”

Ibrahim – who declined to give his full name for fear his family would discover the full extent of his habit – said he believed around 50 percent of Ammani men smoked to the same degree as he did. His companion, Ghaith, disagreed.

“He’s shisha crazy,” he said, gesturing at his friend with his own smoking paraphernalia. “It’s not normal.”

Ghaith says he supports the smoking ban, on the basis of the dangers to health caused by tobacco. He’s also critical of the amount of money spent on the habit, especially with a packet of cigarettes now costing in the region of $3.

Ibrahim commented that he’d measured up the cost of his own smoking addiction: between 2005 and 2011, he guessed, he spent the equivalent of nearly $50,000 on shisha. “I could have bought a house!” he cried.

According to Jordan’s Anti-Smoking Society, Jordanians spends some $650mn on cigarettes every year. Per household, that adds up to more than the amount spent on vegetables or dairy products - and the habit is thought to kill at least 1,550 people annually.

Anti-smoking campaigners know there’s rational enough reason to crack down on the habit. But the reality of enforcing laws and reducing smoking comes up against a heavy addiction to tobacco products and a deeply entrenched assumption that smoking is a right.

Although many Jordanians support restrictions in theory, much of the drive to implement legislation has come from from grassroots campaigning organisations. Frustrated at the lack of smoke-free spaces for her children, Dr Larisa Aluar co-founded Tobacco Free Jordan in 2011 and was surprised to discover that laws against smoking existed at all.

“We realised there was a law, but no-one knew about it. It wasn’t being implemented,” she told Middle East Eye.

Since founding the organisation, she and her colleagues have made small but significant steps in opening up smoke-free spaces in Jordan. Aluar appreciates that smokers feel their freedoms are being constrained, but said she’s concerned with the freedom of others to live without the damaging effects of tobacco for individuals and society as a whole.

“People don’t want to get out of their comfort zone – they want to smoke when they want to smoke,” she commented. “When we have the decision-makers themselves breaking the law, we know there’s a problem. It’s not taken seriously, and it’s not a priority.”

As well as social attachment to smoking, however, the demands of businesses that have built up around smoking culture also challenge regulation. Mohammed, a chef at the Blue Corner, was anxious to explain how the tighter rules would mean imposing separate areas for shisha and food in the cafe – a change he feared would have a negative impact on business profits and, he feared, his job.

In the face of this suspicion, policy makers are combining the ban with education and behaviour change policies.

In recent months, authorities commissioned billboards around Jordan with kooky anti-smoking illustrations – like a heart and a cigarette with the caption "Your love is killing me" – and warnings have been introduced on packets.

Khalifeh said that part of the anti-smoking agenda includes increasing lectures at universities and targeting teenagers, who are the most vulnerable to starting cigarette smoking.

“Anyone that cares about Jordan, and about the future of Jordan, should be behind this. We can’t have a future in this country if all our kids are ending up on the King Hussein Cancer Centre because of cigarettes," Aluar said.

At the Blue Corner cafe, Ibrahim disagreed. "Everybody needs to waste some time," he said, taking another puff of the flavoured arguila by his side. "Nobody can work or study all the time - he needs some time to waste, to be happy, and for that he can take arguila."