Smuggler's story: How one man helped Iraqis escape IS

Security forces around Hawija have reported about 20,000 people have escaped in the last few months despite threats of execution AMMAN - Amid rumblings of impending coalition offensives against Islamic State in north-east Iraq, there are increasing reports of people trying to escape the eastern Iraqi district of Hawija.

Those who make it to areas controlled by the Peshmerga or the Iraqi army speak of hunger, vicious beatings and a terrifying walk to freedom. Those who are caught trying to flee are reportedly executed and their friends and neighbours ordered to repent.

Despite these risks, there is a roaring trade in people-smuggling, secreting desperate Hawijans to the edge of IS territory, unloading them under cover of darkness and pointing them towards Peshmerga frontlines.

This speaks to the desperation of people trying to survive under a double assault: not just IS's violent rule, but a crippled economy cut off from the outside world. War and blockades against the IS group have decimated industry. Jobs are scarce, food and medicine are expensive.

It’s difficult to get a handle on numbers over the long term, but according to an NPR report, police and security forces around Hawija have reported about 20,000 people have escaped in the last few months.

Telling stories of Hawija’s smugglers is fraught with the challenges inherent in telling stories of any dissidents living under IS. To describe their actions in detail is to raise the possibility that their covers might be blown and their lives endangered.

But in recent days, one Hawijan smuggler in hiding said via an intermediary that he was out of the game. IS had been cracking down and the risk was no longer worth the financial reward. His story and that of one of his customers, can safely be told. Through these accounts, MEE can offer exclusive details about how some people-smugglers work to conceal their operations and hustle their human cargo to safety. Names and identifying details have been changed in order to protect the smuggler and the families of both men.

Abu Kareem is a retired animal dealer in his mid-50s. He recalls life “coming to a stop” when IS militants seized control of his town in June 2014 but says that others were more hopeful.

“People first thought their lives would change for the better, that there would be no more atrocities,” he said.

By the time they realised they were wrong, they were stuck. By late summer it had become difficult for Sunni Arabs to enter the city of Kirkuk, 65km west, and the area governed by the Kurdistan Regional Government (KRG), without sponsorship.

Fleeing to Shia militia-controlled areas south of Hawija was equally difficult. For Abu Kareem, opportunity was about to knock.

“When Daesh (IS) started arresting former security force members and executing them, I started smuggling people out,” he said.

For $400 he would drive a customer to the edge of IS territory and point them towards freedom.

“My job helps me, as I have access everywhere around Hawija. I’ve been working in the animal business for a long time, so it’s okay for me to be seen anywhere. My age also helps. Plus I have a cousin with Daesh [IS]. He’s a fighter. I go to mosque with him and make him think I support them, just so they don’t suspect me.”

Contacts on both sides of the frontlines around Hawija help ensure deliveries are timed at weak points between patrols. A few cousins serve as lookouts as Abu Kareem approaches the front in his old truck.

“The more customers you have on a trip, the more risky the job becomes. With one man or two, there is always an answer ready in case we get spotted by Daesh. I can say they are working with me and we usually used my truck, which is obviously used by an animal dealer, so it is a good cover.”

He said his approach changed depending on risk factors, traffic along particular routes and even the seasons.

“On a couple of occasions I used harvest time to smuggle customers as they worked in the fields. I had customers delivered to the front through a cousin in the area. He trusted the men with harvest trucks and showed them the safe routes with no IEDs [improvised explosive devices],” he said.

Even with the price tag, demand for smugglers is high – but higher still is the penalty if a smuggler identifies himself to the wrong person. Abu Kareem had a strict policy of accepting customers only through personal recommendation. The deal would be structured through middlemen to manage risk, but the final say was his.

Typically, a customer would meet Abu Kareem at a designated place and use the password, “I need twin baby goats”. If Abu Kareem responded “I have twin sheep”, the deal was on.

Clothing could make or break an escape.

“Customers should wear tan robes so they can’t be seen from a distance. The most important thing is to wear a white shirt under the robe. They need it when they start walking towards the Hashd al-Shaabi (Shia militias) or government forces, to use it as a flag, a peace sign,” he said.

He also warned people to turn their phones off and to delete any suspicious numbers – including his own.

Despite knowing how to escape, Abu Kareem chose to stay in Hawija and work as a smuggler for more than a year.

“Other people’s misery was my fortune. I’m sorry to say this, but those people needed me and I was in a position where I could do this for them and make money,” he told MEE.

Abu Kareem’s favourite route out of Hawija, to the town of Alam, was compromised when a large group tried to escape on foot. One of his last drop-offs on this route was a young man named Khaled, who, like many customers, left Hawija as a last resort.

When IS swept into Hawija, Khaled was freshly out of high school and unemployed. Over the summer, he realised his prospects were grim and only going to get worse.

“I saw no life under IS. I saw people getting arrested and punished for stupid reasons. I got desperate and couldn't find a job, and I didn't want to become a fighter with them,” Khaled told MEE.

“My family was known as pro-government, so I thought it was just a matter of time until they knocked at my door.”

Khalid said he had known one of the smuggler’s cousins for a long time, and during a conversation mentioned that he wanted to go to Kirkuk. The cousin said he might be able to help.

“I was very happy hearing him say that. I was on fire waiting until he got back to me, and he said, you are going to be in Kirkuk soon, God willing. Then we discussed the price and agreed on $400.”

One night in late October, Khaled stowed away in Abu Kareem’s truck and rode to the edge of IS territory. He slipped into the darkness and crept to a ditch a few hundred metres from the frontline, where he followed instructions to wait until dawn.

“I remember that night in the open; it was so horrible. I hadn’t experienced this before. I have not been in the military,” he said.

Khaled spent the night flat on the ground, snacking on a sandwich and bottle of yogurt mixed with water his mum had prepared for him. Just before dawn, Khaled wriggled out of his white t-shirt and prepared to wave it as a flag of surrender.

“I waited until the sky was clear. I began seeing light on the other side, so I started crawling closer and closer, until I realised I was only a few hundred metres from the Peshmerga,” he said.

“I stayed in a ditch until the sun came out and they could see me. I didn't want to start walking to them before that, this was the instruction from Abu Kareem: you have to be visible then walk and shout: 'I am an escapee, I seek safety, please do not shoot at me,' putting my arms high with the white shirt waving,” Khaled recalled.

He followed the instructions and was received at gunpoint by security forces.

“They told me I should turn and show them my back and lift up my dishdasha [robe]  so they could see I wasn't wearing anything suspicious,” he said.

Once safely on the other side, Khaled surprised himself.

“The first thing I did once I reached security forces, was think about smoking a cigarette, and I am not even a smoker! But Daesh made it so desirable,” he said.

IS considers smoking a "slow suicide" and have enforced a ban throughout territories it controls, burning millions of cigarette packs in Iraq and Syria

Those whoare caught smoking face a minimum penalty of 40 lashes, although the militants have also been know to execute repeat offenders.

Safely in Kirkuk and living with his extended family, Khaled has joined the smuggling business himself. Lured by a promised cut of any business he brings in, he canvasses his friends in Hawija for future customers and refers them to smugglers still working there.

Smuggling on the rise

There are indications that escaping from IS-controlled territory is on the rise. Peshmerga along the frontlines between Hawija and Kirkuk say they are on the lookout for escapees, travelling alone or in groups of as many as 20 people.

IS is working to staunch the flow with road checks, heavy punishments for attempted escapes and stern warnings: a photograph circulated on social media shows an IS-marked roadsign prohibiting lorry drivers from picking up “soldiers of the Islamic State”.

“IS wants to have this contiguous piece of territory, and their propaganda says they do, but the story on the ground is different. It’s possible to slip across borders,” Winter said.

“The movement of people is a lot more fluid than IS or the Iraqi government would like to suggest.” 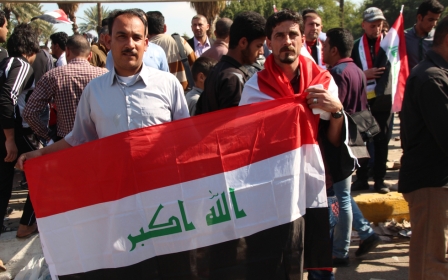 Inside Iraq
Unity through division: The Sunni plan to save themselves and Iraq