People have been sharing pictures of their empty plates to highlight Yemen's humanitarian crisis, as millions go without food A plea by a nine-year-old Yemeni boy to highlight his country's humanitarian crisis has been answered by social media users, who have been sharing images of their empty plates online.

With millions of Yemenis reliant on aid and on the brink of famine, Hamza Hakim Almasmari asked for people to skip a meal for three consecutive days and upload pictures showing their absent food.

For his 9th birthday, Hamza wants your help to end the famine in Yemen—the world's worst famine in a century. #FastActionForYemen pic.twitter.com/KAx5m0C7Ty

At his request, social media has been flooded with empty plates, alongside the hashtag #FastActionForYemen. Almasmari's campaign has also been highlighted by rights organisations, such as Change.org and Codepink.

Yemen is suffering under an intense humanitarian crisis, described by the United Nations as the world's worst, which was sparked by a conflict between a Saudi-led coalition and the Houthi movement.

In an emotional video, Almasmari says he sees people eating from rubbish bins on a daily basis and asks people to use his hashtag and donate to the cause.

Skipping a meal is hard but I'm only doing it for 3 days - many people in #Yemen endure worse hunger every day. Stop the starvation. Stop the war.@AdelAljubeir @abdusalamsalah @MohamedBinZayed, please sign a peace deal now! #FastActionForYemen pic.twitter.com/XX496RXbyV

People across the world have answered his call, and tagged in leaders from Yemen, Saudi Arabia and the United Arab Emirates in an attempt to pressure them into relieving Yemenis from the conditions they face.

Using the hashtag, social media users say they are either skipping a meal as Almasmari suggested or fasting altogether.

The western-backed Saudi-led coalition intervened in Yemen in 2015 after the Houthis ousted the internationally recognised government of President Abd Rabbuh Mansour Hadi from power in Sanaa in late 2014.

The United Nations says some 20 million of Yemen's 27 million people require food aid, with 10 million of them close to famine. However the UN says the situation could get worse, with life-saving programmes set to be closed over the next two months due to lack of funds

In February, international donors pledged $2.6bn to help the UN and its partners meet the urgent needs. However, the UN said in a statement in August that less than half of the promised funds had been received.

According to Save the Children, up to 85,000 children under the age of five may have died due to malnutrition and disease since the war began.

About 19 million people may lose access to healthcare, tens of thousands of Yemenis may be made homeless and clean water may stop flowing for five million people at the end of October, the UN said.

The UN has sought to ease tensions between the combatants and prepare for peace negotiations in a war that has killed tens of thousands. 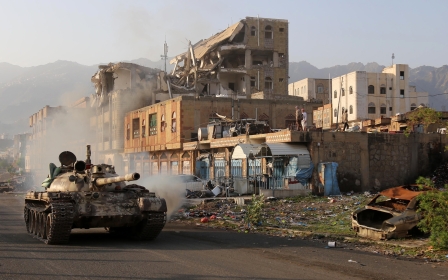 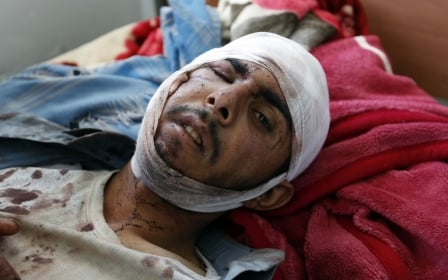