In recently taken areas of Libya, some residents say they are relieved some modicum of stability has returned 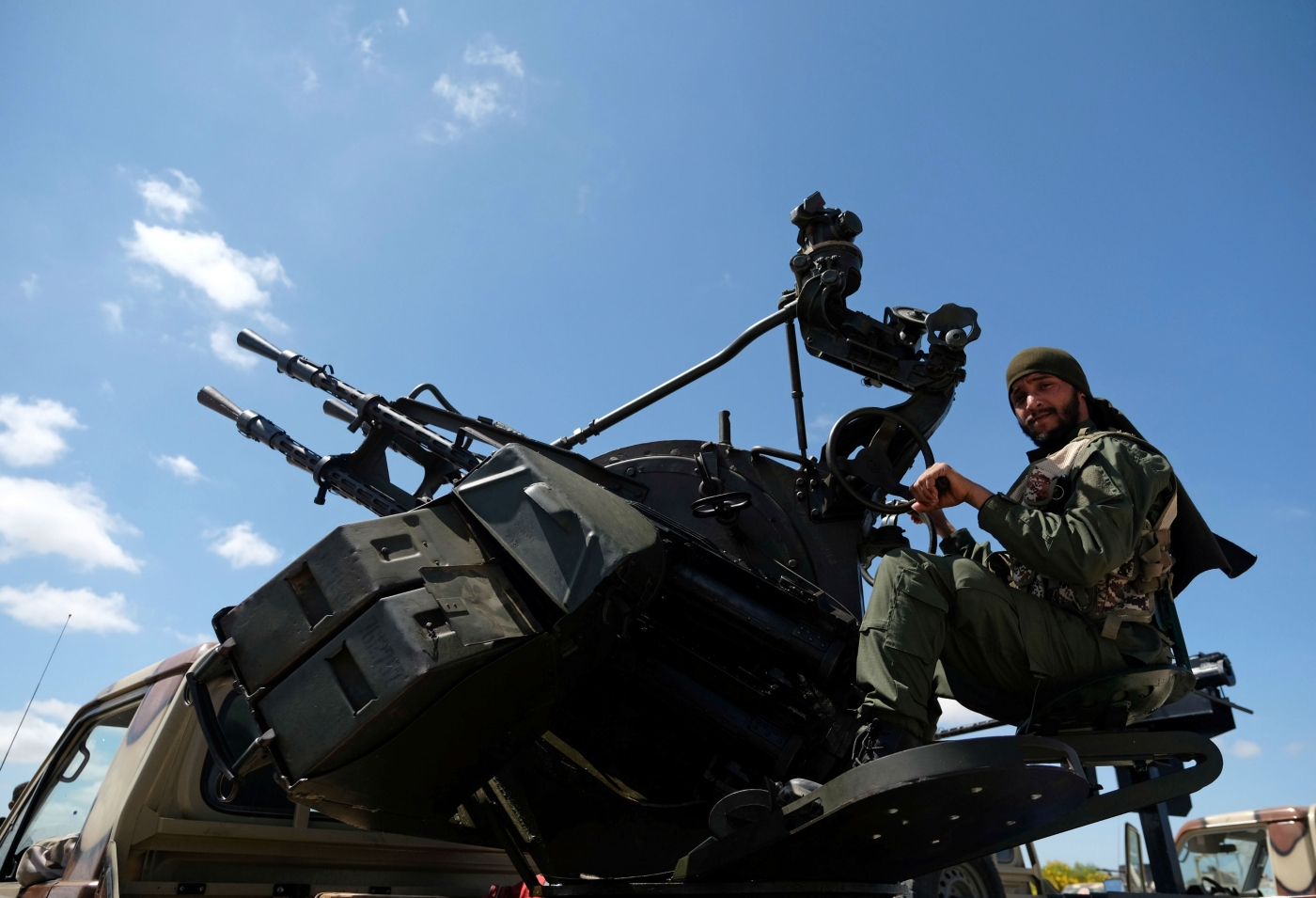 Field Marshall Khalifa Haftar's Libyan National Army (LNA) has swept west, keeping Tripoli under a months-long assault in a conflict in which both sides have been accused of war crimes and deploying foreign mercenaries.

In Tripoli and its environs, civilians have been killed, displaced and cast into uncertainty by the operation.

But in areas retaken by the eastern government's military commander, some Libyans are relieved to see the fighting apparently behind them and feel some modicum of stability has returned.

At times, the comparison with the militias that once called the shots in places like Tarhuna is stark. But residents are also subject to strict restrictions on freedom of expression, imams are encouraged to laud Haftar in their sermons, and open support of former leader Muammar Gaddafi is punished.

Mohammad, 26, had long feared the LNA reaching his small town lying between southern Tripoli and Tarhuna.

"I was against Haftar for three years because of what the media showed, which was killing and violence, but actually it was just propaganda and the picture changed when I saw the reality," he told MEE.

"I was thinking that the LNA would be no different to the militias until I saw them on the ground. There's a big difference in organisation and respect, and the soldiers are afraid of the military police, who are very strict," he said.

Libyans, like Mohammad, in recently taken areas, said the LNA has made concerted efforts to rule in a distinctly different way to the militias present before, and on the ground it has had considerable cut-through. 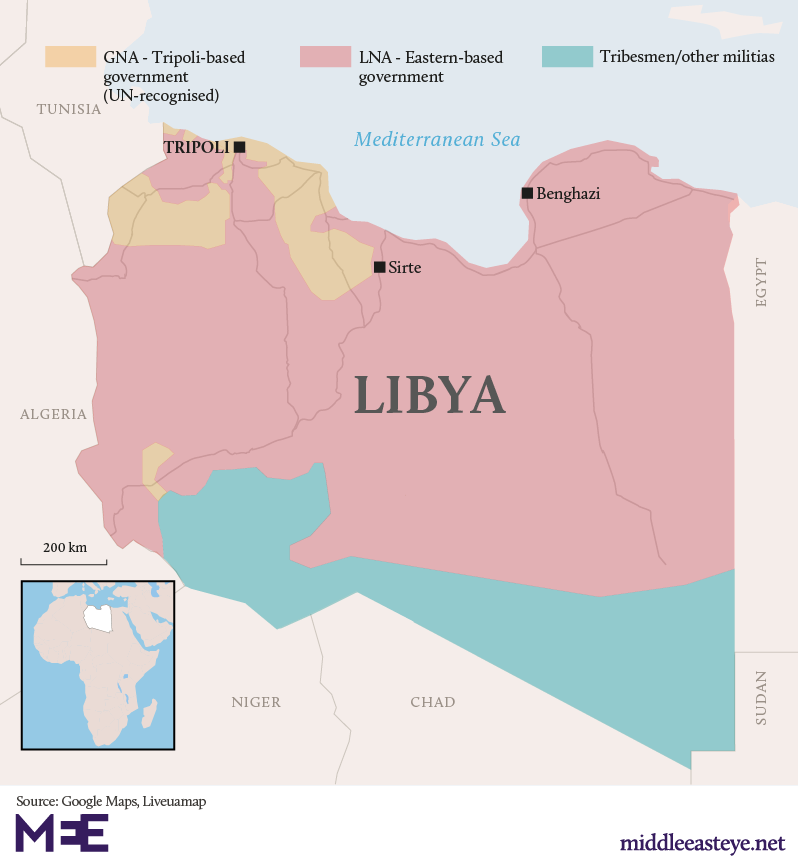 "There are a few who still behave like militias, but 85 percent of the LNA are good and respectful to people and, if we have a problem with any soldier, we report them to the military police, who take immediate action," Mohammad said.

This, he added, was a stark contrast to forces affiliated to the UN-backed Government of National Accord (GNA).

"We were under militia control for five years. They were criminals who controlled everything, even local trade, and when they didn't get their salaries, they extorted money from civilian cars and trucks transporting goods," said Mohammad, who claimed he and his relatives had been menaced several times at gunpoint by GNA-affiliated forces.

During the almost year-long battle for Tripoli, both sides have been accused of war crimes and targeting residential areas, and the United Nations recorded 284 civilian war-related deaths and 363 wounded in 2019.

Although still living on the fringes of an active conflict zone, Mohammad's experience of 10 months living under LNA rule has made him re-evaluate the Tripoli conflict.

"This war is between the LNA, which I see is a real organised and professional army with a command sequence, rules, order and discipline, and militias who are only fighting for money and power," he said.

After gaining the strategic town of Sirte in January, its eastern front line near Abu Grain is now 100km from Misrata.

The LNA consolidated a reasonably broad support base in Sirte (where many locals are from Haftar's Ferjani tribe) with a smooth takeover of the city from GNA-aligned Misratan forces, reportedly without any fatalities.

Formerly praised for defeating Islamic State (IS) in the city in 2016, Misratan fighters' rule had increasingly dissatisfied Sirte locals, an enmity fuelled by enduring mutual mistrust dating back to 2011, when the cities took rival sides.

Prior to entering Sirte, Haftar had intensified the conflict in Tripoli's southern suburbs, diverting Misratan attention and manpower to the capital.

After striking a deal with local Brigade 604, which was aligned with the Misratans during the battle against IS, and gathering intelligence on military positions via local supporters, residents say one show of LNA air power prompted remaining Misratan fighters to flee.

Brigade 604, Madkhalis who follow a branch of Salafism that upholds the notion of a head of state, whether a dictator or democratically elected, subsequently released a statement saying they were committed only to fighting terrorists and were not prepared to fight either party in the current conflict.

"I'm very happy with the LNA, but not with the Misratans because, before they fled, they set fire to the telecommunications centre and we had to try and extinguish the fire," a Sirte local official, speaking on condition of anonymity, told MEE. "It wasn't right to damage civilian infrastructure like that."

Lying near Gaddafi's birthplace village of Abu Hadi, Sirte has long been viewed as a hotbed of pro-Gaddafi sentiment and, after the arrival of the LNA, some residents flew the green flag of Libya's former leader.

Although the eastern government backing Haftar has been more accommodating to pro-Gaddafi Libyans than successive rival institutions in Tripoli, the LNA numbers many former revolutionaries in its ranks, who staged a crackdown.

"By showing a harsh face towards anyone who raised the green flag or was suspected of being pro-Gaddafi, the LNA initially created some discord among the tribes, but it's settled down now," said local resident Ahmed.

"Although people here never seem satisfied with who is in charge, as long as everyone stays calm, there are no problems. But if anyone shoots in the air or raises the green flag there will be trouble."

Support for the LNA was currently very high in the city and the surrounding areas, he said, although many remained staunchly pro-Gaddafi and viewed the LNA as a vehicle to get rid of 2011 revolutionaries.

Revolution anniversary celebrations on Monday held in the east and other LNA-held areas had gone down badly with pro-Gaddafis, he added.

Haftar in the mosques

Libya's central coastal towns have since 2014 repeatedly changed hands between the eastern government, Misrata and IS. Residents are relieved that things have since settled down.

"To be honest, it really is better under the LNA and the soldiers have become very polite. There's no military presence inside the towns, only on the highway," said local resident Mahmoud.

"They've brought back the rule of law and imposed it effectively, curbing tribal powers and forbidding celebratory gunfire, which was a big problem.

"The police are working well now, arresting drug dealers and criminals who were acting with impunity."

LNA-run checkpoints had also been professionalised, he said, with sloppy youths in mismatched fatigues replaced with polite soldiers in smart matching uniforms.

'They shouldn’t mention Haftar in mosque, like he’s a god or something'

"The only people who've had trouble are those who fought against the LNA before, either with Misrata or [former federalist and oil blockader Ibrahim] Jadhran, who were initially arrested, had their weapons confiscated, were menaced and then released. But, as long as they stay quiet, they have no problems," Mahmoud said.

The main difficulty under the LNA, Mahmoud said, was a lack of freedom of speech, where no one could speak out against Haftar, his forces or the eastern government.

However, with freedom of speech widely suppressed across the country since mid-2014, this is a nationwide problem, with restrictions merely dependent on who is in charge of areas at any given time.

"Another thing I don't like is that the preachers at the mosques mention Haftar in their sermons and prayers," he said.

"I asked one of the imams about it, and he said it's on orders from [the eastern government in] Beida. To my mind, they shouldn't mention Haftar in mosques, like he's a god or something."

In 2016, Misratan forces battled to expunge the Islamic State group from Sirte and territory west of the city it held.

But they lacked the capacity and resources to hunt down IS members beyond Sirte, and even former revolutionaries say the better-resourced LNA has helped finish the job. "Securing the area south of Sirte shows their strength, and the LNA is now constantly using roads that IS controlled for years," said one former revolutionary, speaking on condition of anonymity.

"I used this route recently at 5am, something unthinkable for the last five years, and I felt completely safe."

An LNA soldier told MEE that the force had been unable to hunt down all rogue IS elements, but had considerably diminished the group's numbers and strength, and had pushed remaining militants further south and into unpopulated mountain areas.

The LNA's Madkhali units have been tasked with rooting out suspected IS and al-Qaeda loyalists in the village of Nufaliya, a place where militant groups once held much sway. But one Nufaliya resident said that has resulted in dubiously conducted arrests and lengthy investigations, frustrating residents.

While some arrests for carrying weapons (and subsequent releases) had been straightforward, he said other suspects had been seized under a cover of darkness.

"Suspects are held in Ras Lanuf but small numbers, around 10, have been transferred to Benghazi jails for further investigation," he said.

"Some of these people were actually IS members in hiding and mostly they were reported by family members worried they still have the IS ideology.

"The community is OK with the principle of the arrests and regular family visits are allowed to prisoners, but the way some arrests were carried out, in the night at gunpoint, was most unwelcome."

'Maybe Haftar is actually a gift'

Other residents, however, are encouraged by the strict measures put in place, and even appreciate Haftar's demagogic style.

"What we have seen, under the LNA, is that there is no place for IS, al-Qaeda or even the Muslim Brotherhood," said Osama, who lives near Sirte. "Stability is excellent across the areas controlled by the LNA, and Libyans need this kind of stability. I was with the revolution, but Libyans need a dictator right now.

"There can be no democracy while we have such a proliferation of weapons, and only a dictator will have the power to collect all weapons and put an end to militia rule."

Osama, though, is counting on the 76-year-old’s age to make sure LNA-held areas of Libya do not stay under the rule of one autocrat for too long.

"Maybe Haftar is actually a gift, as he won't last 42 years like our last dictator because he's already quite old. So he'd probably only last 10 years, maximum, and maybe only five," said Osama.