Abdalla Hamdok said on Thursday that his cabinet marks "a new era" in Sudan, which has seen months of protests and widespread calls for the creation of a civilian-led government.

The prime minister said two ministers would be added to the government at a later date, Reuters said.

"The top priority of the transition government is to end the war and build sustainable peace."

The cabinet's unveiling comes as part of a three-year agreement signed last month between the military, civilian parties and protest groups in Sudan.

It also follows months of widespread popular protests across Sudan that started last December in anger over a decision to raise the price of bread.

The protesters continued to take to the streets across the country to call for the resignation of Bashir, who led Sudan for three decades, and for the formation of a civilian-led government.

Hamdok, speaking at a news conference in Khartoum on Tuesday, said his decision to include women in his cabinet was "logical", since "the women of [the] country were on the frontline of this revolution".

The cabinet will operate alongside a separate Sovereign Council, a body established last month to share power between Sudan's military and civilian opposition.

Sudanese protesters had called for a civilian-led body to lead the country's political transition after Bashir's overthrow in April, and the council was created after months of negotiations between civilian and military leaders.

The army will lead the newly formed body for the first 21 months under the power-sharing agreement.

The deal also stipulates that Sudan must form a legislative body within 90 days of its signing, AFP reported.

Hamdok approved the first 14 ministers of his cabinet on Tuesday, but AFP said the formal announcement was delayed as the prime minister mulled over his choices. Sudan: Hundreds of protesters take to streets for those missing since sit-in dispersal
Read More »

The opposition coalition Forces of Freedom and Change (FFC), which negotiated the power-sharing deal with the military, had been talking with Hamdok since last week over his cabinet nominations.

Meanwhile, the defence and interior ministers were nominated by the military, Reuters reported.

Hamdok previously worked as an economist with the United Nations, and he has said that his priority is fixing Sudan's ravaged economy, which has led to soaring living costs in recent years.

"Sudan's economic challenge is a big challenge, but we can tackle it," Hamdok said at Tuesday's news conference, as reported by Reuters.

"In the near term, we need to address the shortage of commodity items - sugar, flour and petroleum," he said.

"On the currency front, we need to stop inflation, deal with the exchange rate of the national currency, and restore confidence to the banking system." 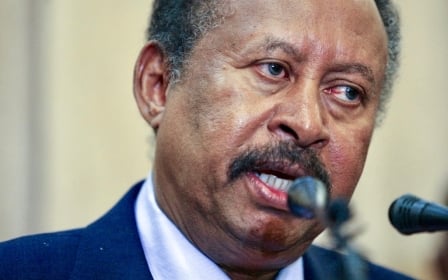 Sudan Protests
Sudan: Hundreds of protesters take to streets for those missing since sit-in dispersal