A Sudanese protester waves a broom in front of a makeshift barricade during a sit-in outside the army headquarters in the capital Khartoum on 30 April (AFP)
By
Mohammed Amin
in
Khartoum, Sudan

For Youssef Ahmed Youssef, the scene today in the Sudanese capital is eerily familiar, reminding him of the events of October 1964.

That's when the military regime of Sudan's then-dictator Ibrahim Abboud sought to knock down a series of barricades that protesters had erected to cut off a bridge between Khartoum and its twin city, across the Nile River.

"I'm very optimistic about that," said Youssef, referring to the current Sudanese military council's pressure on Sudanese protesters, who earlier this month set up around a sit-in across from the country's military headquarters in Khartoum.

The sit-in, the culmination of months of demonstrations against former Sudanese President Omar al-Bashir’s three-decade rule, carried on after the army removed him from power on 11 April.

The protesters are demanding civilian rule and opposition leaders have been pressuring the transitional military council (TMC), which has run the country since Bashir's ousting, to hand power over to a civilian government.

Youssef told MEE he belives the Sudanese miltary council's efforts would fail this time around, like the former military regime did in the 1960s.

"I can see all the signs of failure for this military council, which is actually representing the remnants of the old regime," he said.

Sudan's military rulers warned on Tuesday that they were willing to cooperate with protest leaders and keep negotiating on a possible handover of power as long as there was "no chaos" from now on.

Speaking in a news conference on Tuesday, TMC deputy chief Mohamed Hamdan Dagalo said that tactics used by demonstrators aimed at disrupting transport and energy links would have to end. 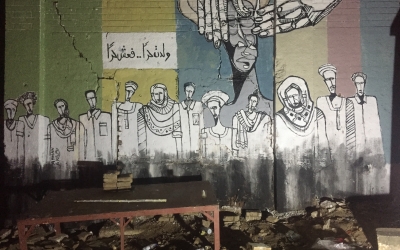 However, he said that the protest sit-in that has been taking place outside the defence ministry since 6 April would be allowed to remain.

Widespread reports have said that the military has been planning to disperse the Khartoum sit-in, where thousands of Sudanese have flocked in a jubilant, peaceful protest.

"We are ready to negotiate but no chaos after today," said Dagalo, who goes by the nickname Hemedti.

"We told them, continue with the sit-in, but the train is connected to delivering fuel."

The main organisers of the protests - the Sudanese Professionals Association - called on Monday for civil disobedience and a general strike as meetings with the TMC failed to provide any breakthrough on the creation of a joint civilian-military transitional council.

The outstanding issues revolve around the make-up of that council, as well how long it would remain in place.

Dagalo said he suggested an army-led council, with seven of the 10 seats being taken up by military officials and the remaining three going to civilians. The opposition, he said, insisted on a 15-member council made up of eight civilians and seven military officials.

"We have no interest in dispersing the sit-in but it's in the interest of the Sudanese people to open the roads," said another TMC member, Lieutenant General Salah Abdelkhalek. He also distanced the TMC from the previous Bashir government, which had ruled since 1989 and was accused of numerous human rights abuses.

During the press conference, the TMC also said it had accepted the resignations of three TMC members. The SPA had demanded that the three be dismissed over their alleged role in a crackdown that killed dozens of protesters.

One of the three members, who resigned last week, was Lieutenant-General Omar Zain al-Abideen, who headed the TMC’s political committee.

Meanwhile, thousands of protesters have vowed to continue with their sit-in, erecting more barricades on the streets surrounding the square in front of Sudan's military headquarters.

The protesters have also closed Nile Street, an important artery that links downtown Khartoum to other important parts of the capital.

One of the protesters in Khartoum, Marwan al-Kanzi, told MEE he would never leave the square - and was willing to die there.

'Those barricades were put here ... after many of our comrades died here, shot with live bullets fired by security officials. How could we leave it now?'

"Those barricades were put here on 7, 8, 9 of April after many of our comrades died here, shot with live bullets fired by security officials. How could we leave it now?" he said.

"The only thing we can do for their souls is to stand strong to achieve our goals of the revolution."

A top member of Sudanese opposition alliance Change and Freedom on Tuesday accused the military of trying to weaken the protesters' sit-in.

"The military council try to tactically weaken the sit-in, making it smaller and putting it under the control of the army, but the youth and protesters won't accept that," Sidig Youssef told MEE in a telephone interview.

"We hold the army responsible of any consequences happen in the coming days or hours," he said.

Still, he said the army has also breathed new life into the protest movement, as several military leaders have echoed the type of discourse often used by Bashir's former regime.

"This may lead to more tension and maybe serious consequences," Ashiekh told MEE.

"The confrontation looks imminent and the military council should wisely ... make some concessions to the civilians and youth to contain any potential violence."

With files from Reuters news agency.