Justice and Equality Movement fighters, pictured here in 2011, have been fighting in Darfur since 2003 (AFP)
By
AFP

Tens of thousands of people have been killed and millions displaced over the years in the three regions as ethnic minority groups rebelled against President Omar al-Bashir's Arab-dominated government.

While Khartoum representatives signed the road map at a previous round of talks in March in Addis Ababa, prominent rebel groups refused to come on board at the time.

But on Monday three of these groups - the Justice and Equality Movement, the Sudan People's Liberation Movement-North (SPLM-N) and a faction of the Sudan Liberation Army (SLA-Minnawi) - signed it in the Ethiopian capital.

Another faction of the Sudan Liberation Army, the SLA-AW, is still to sign.

"The top priority is to stop the wars and deliver humanitarian aid to people affected," Sudan Call, a Sudanese group comprising rebel movements and opposition political parties, said in a statement on Tuesday.

"The Sudanese people look forward to a comprehensive peace process."

The road map paves the way for a permanent ceasefire to be negotiated and ways for humanitarian aid to be delivered to the three areas.

While Khartoum says that the conflict in Darfur that erupted in 2003 has already ended, neither the government forces nor rebels have gained a decisive upper hand in Blue Nile and South Kordofan.

"What happened yesterday is a positive step on the road to a comprehensive and peaceful solution to the Sudan crisis," the spokesman for the Justice and Equality Movement told AFP on Tuesday.

"We will now start direct negotiations for a ceasefire in Darfur, South Kordofan and Blue Nile," Jibril Bilal said, referring to the talks expected to start on Tuesday in Addis Ababa.

Bilal said a ceasefire will help "bring security to these three areas and also help deliver humanitarian aid to civilians" there.

Monday's signing of the road map boosts Bashir's government as the initiative is backed by Washington, the European Union and regional countries.

It is also expected to give an impetus to an ongoing broader national dialogue aimed at addressing overall discontent in Sudan and ease pressure on its sanctions-hit economy starved of hard currency since South Sudan separated in 2011.

"We welcome the signing of the road map" by rebel groups, Bashir's National Congress Party said in a statement.

"This road map is an entry point to reaching a comprehensive political solution to end conflicts in Sudan," it said.

The fighting in Darfur, Blue Nile and South Kordofan has sucked a lot of resources from the economy and also hindered progress on debt relief, experts say.

Sudan owes tens of billions of dollars in debt, and is under a US trade embargo.

The wars in South Kordofan and Blue Nile, and the older insurgency in Darfur are fuelled by complaints of economic and political neglect by Bashir's government.

But an analyst said the road to peace was still long.

"What happened yesterday is not a final agreement but more of a procedural framework on how to continue future negotiations," said Khalid Tigani, the editor of the Elaff newspaper.

"I don't think these negotiations will arrive at a comprehensive solution to Sudan's crisis as such talks held under international pressure never tackle the root cause," he said. 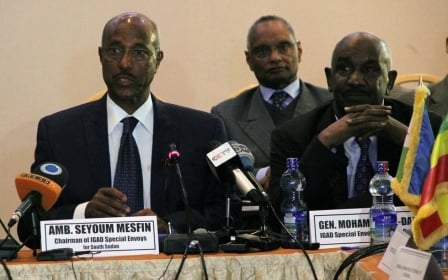