Sudan’s new transitional government has come under heavy criticism over police violence against Sudanese demonstrators last week during the first major protests since the signing of a power-sharing deal between civilian and military groups.

Thousands of protesters were met with force by the police when they took to the streets on Thursday to call for an independent judiciary and justice for protesters killed since December, when mass protests first erupted against now deposed dictator Omar al- Bashir.

Activists, human rights organisations and analysts have accused newly appointed prime minister, Abdullah Hamdok, and his recently formed government of failing the first democracy test by not granting the people freedom of assembly and the right to protest.

Demonstrator Wala Mahmoud told Middle East Eye that police forces had used tear gas and batons against protesters to prevent them from holding a sit-in outside the presidential palace in Khartoum, wounding a number of people.

“I saw many elderly people and children suffer from choking and fainting because of the tear gas and the rush of people fleeing,” she said.

Al-Tahir al-Amin, a trader in downtown Khartoum, said he saw police forces chasing the protesters down the streets surrounding the palace, located near the city’s centre.

Amin said he and other traders did not expect to see violence used against protesters this time around after the formation of a civilian government by a sovereign council composed of six civilian members and five military personnel.

“We thought things would be different, so we didn’t close down our shops due to the protests. But we were surprised when we witnessed the same things happen and the police using force against pro-democracy protesters,” he told MEE.

The march, organised by the Sudanese Professional Association (SPA), demanded the quick appointment of a new head of the judiciary and a new public prosecutor, and the formation of an independent committee to investigate security forces blamed for the death of protesters, including 128 people killed as they staged a peaceful sit-in in front of the army headquarters on 3 June.

The SPA condemned the use of violence against peaceful protesters, urging the government to grant the people the right to assemble and protest.

“The right of freedom of expression was granted in the constitutional declaration leading to the transitional period,” it said in a press release.

The Alliance of Democratic lawyers, which will submit a petition against police brutality, also said the violence was a violation of the constitutional declaration signed last month

“It’s the transitional government’s responsibility to ensure that violence is not used against demonstrators and to hold accountable those who carry it out,” a leading member in the alliance, Wael Ali Saeed, said.

“The government should provide the platform for the people to protest and express themselves and raise their voices and demands, so use of violence against the protesters is strongly condemned,” she said.

The agreement signed on 17 August between the Transitional Military Council (TMC) and the Forces for Freedom and Change (FFC) stipulates that the prime minister would name a government of 20 ministers, with the exception of the interior and defence ministers, who would be appointed by the council’s military members.

The sovereign council will meanwhile appoint the chief of justice and public prosecutor.

However, Mohammed al-Faki, the spokesman and a civilian member of the sovereign council, said that there are disagreements between the civilian and military council members over both appointments.

Hamdok’s nomination of Nemat Abdullah as head of judiciary and Mohammed al-Hafez as public prosecutor were rejected by the council’s military members.

“The lack of trust and divergent perspectives and interests between the civilians and the military will keep causing disputes,” political analyst Khaled al-Faki told MEE.

He said the army’s right to appoint the two high-profile ministers was part of a compromise that led to the agreement between both sides.

“This actually puts the interior and defence ministers above the law and above the power of the prime minister,” he said.

The analyst said neither side is satisfied with the compromise, which may lead to a range of complications linked to human rights abuses, reconciliation, the dissolution of the old state institutions, and the presence of the RSF militias.

“The mediators who oversaw the compromise have a responsibility to help manoeuvre these difficulties before they escalate,” he warned.

Amnesty International secretary general, Kumi Naidoo, said on Friday that the appointment of the minister of interior, attorney general, and the chief justice should not be left to the military because it will be a bad signal to send to the people.

Demonstrators are planning another round of protests on Thursday.

Civilian council member Siddig Touer said on Saturday that the protests were unsuitable during a period of transition.

Touer told local newspapers in Khartoum that “now is the time for work and building the country, and not for organising of marches”.

But activists rejected Touer’s statement and said it has disappointed pro-democracy demonstrators.

“Khartoum’s civilian elites and members of the upper middle class who recently came to power are hardly working and are in alliance with the army to safeguard their interests and have no problem with the use of force against protesters,” youth movement activist Seraj Omar said. 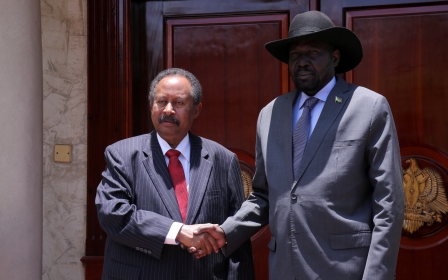