PM Hamdok says Sudan has reduced its troop numbers in Yemen to 5,000 Sudanese Prime Minister Abdalla Hamdok announced on Sunday that his country has reduced its troop strength in Yemen where it has bolstered a Saudi-led military coalition supporting the government against rebels.

"Our troops in Yemen at the beginning were 15,000 and now they came down to 5,000," Hamdok said on arrival in Khartoum after a six-day visit to the US. "We believe that the solution in Yemen is a political solution," he added.

His announcement was the first time an official had provided figures on the number of Sudanese soldiers involved in Yemen's civil war, AFP said.

There had been speculation that Sudan would reduce its troop numbers since the United Arab Emirates (UAE) said in June it had scaled down its military presence in Yemen, and later withdrew troops from the southern port of Aden, Reuters said. Hamdok assumed his role in a transition government in September, following the April removal of former president Omar al-Bashir.

Bashir, who led the country with an iron fist after taking power in a 1989 coup, made the decision to send soldiers to Yemen to help fight the Iran-aligned Houthi rebels.

Subsequent Sudanese casualties - images of which circulated online – have prompted calls for their withdrawal.

Riyadh has been holding informal talks with the Houthis since late September about a ceasefire, sources have said, as it seeks to exit an unpopular war following the troop withdrawals by the UAE, its main partner in the military coalition.

The war has killed tens of thousands of people and pushed millions to the brink of famine.

Hamdok's US visit coincided with a spectacular warming in relations between Khartoum and Washington, made possible by the fall of Bashir and the transition to a government comprised in part of protest leaders.

Hamdok said he had also held talks with the International Monetary Fund and the World Bank over Sudan's foreign debt of almost $60bn.

On Wednesday, Washington announced a decision to appoint an ambassador to Khartoum for the first time in 23 years.

In meetings with US officials, Hamdok discussed the possibility of Washington removing Sudan from its "state sponsors of terrorism" blacklist.

Sudan, which once hosted al-Qaeda leader Osama bin Laden, has been on the list since 1993.

US lawmakers who met Hamdok said Sudan must reach a settlement with families of the victims of the 1998 al-Qaeda bombings of the US embassies in Kenya and Tanzania as well as the 2000 attack against the USS Cole. 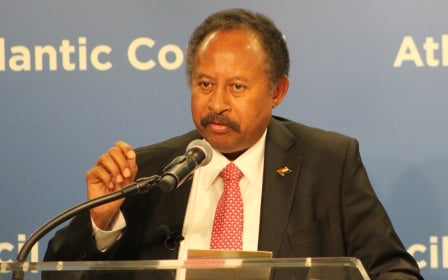