As hunger strike campaign against Egypt's protest law grows, some rights groups hope the ruling will set a precedent for other detainees 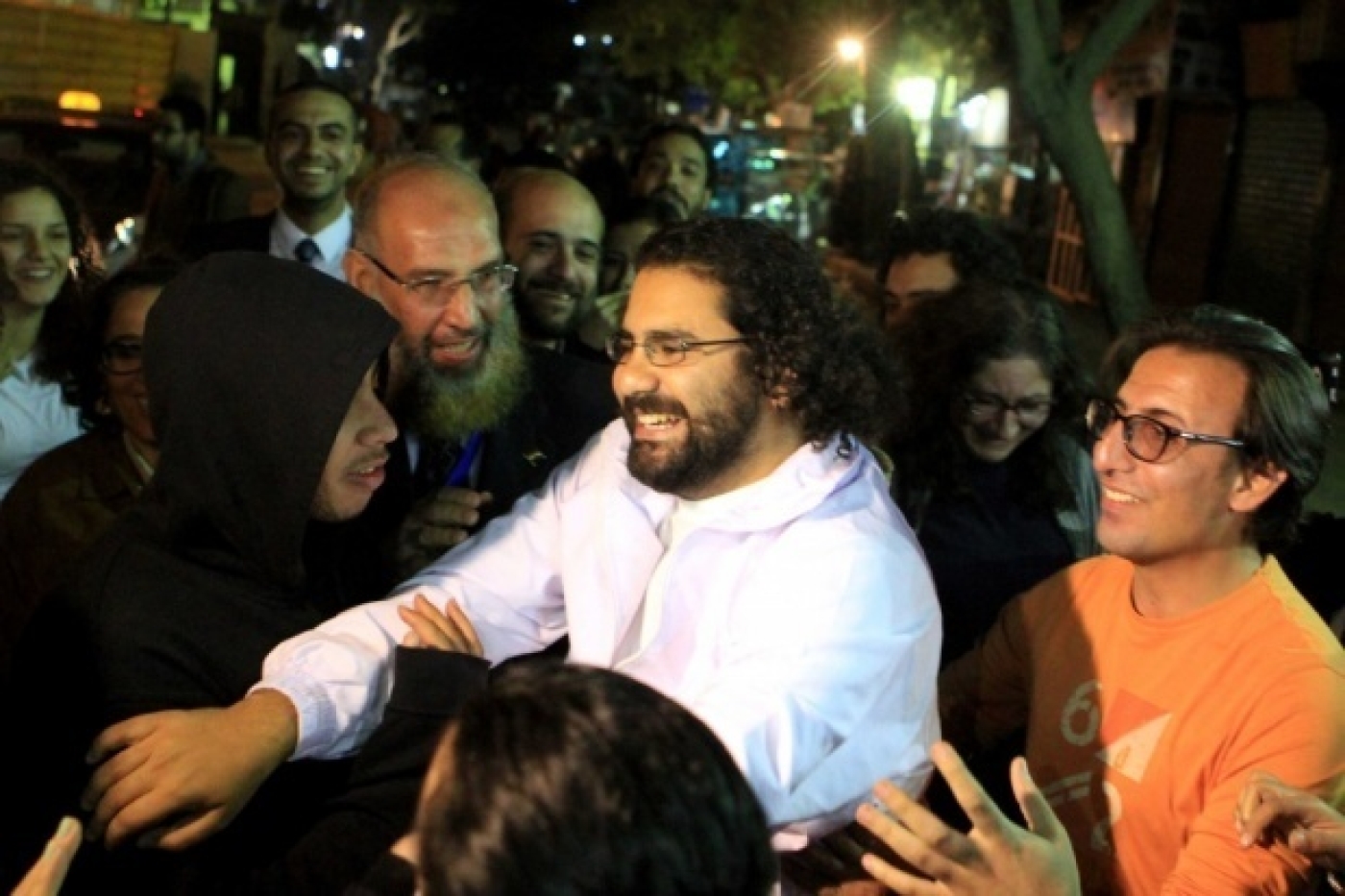 The judge overseeing the case also stepped aside at the request of the defence legal team.

The decision prompted displays of joy inside the courtroom.

The three defendants released on Monday will face a retrial, and in the meantime will resume their hunger strike until the controversial protest law under which they were originally charged is abolished.

Abdel Fattah has already been on hunger strike for 27 days.

Abdel Fattah had been sentenced along with 24 others to 15 years in prison on charges of violating Egypt’s controversial 2013 protest law.

Outcry over evidence seen in court

The video used as evidence was referred to the prosecutor general, to determine whether it was permissible for them to be shown in court.

Abdel Fattah, whose name is “synonymous with Egypt’s 25 January [2011] revolution” according to leading newspaper al-Ahram, was originally arrested at his home in November 2013 over allegations of illegal assembly, blocking roads, attacking a police officer and stealing his radio.

The charge of illegal assembly stemmed from a demonstration Abdel Fattah attended on 26 November to protest a law allowing civilians to be tried in military courts.

The protest came just two days after legislators signed a controversial new law on 24 November, which stipulates that any public demonstration must have prior police authorisation.

The judge in charge of Abdel Fattah’s case stepped aside on Monday, after his defence team submitted a request for a new judge in April.

They claimed that the judge in charge at the time, Mohammed al-Fikky, was not objective.

Abdel Fattah had previously published details of rigging that allegedly took place during the 2005 and 2010 presidential elections, including at a polling station run by al-Fikky, the judge who would later try him.

Rachid Mesli, legal director of al-Karama, an independent NGO focusing on judicial rights in the Arab world, told MEE that the court could have come under pressure to release the three men.

“The judiciary can face pressure from the security services, the military or the government.

“The Egyptian judiciary has no independence. It is certain that legal decisions are influenced directly by the political authorities.”

The release of the three defendants on Monday, with a bail bond of 5,000 EGP ($700), has been welcomed by rights groups, who have used the opportunity to demand the release of other detainees held for breaking the protest law, whom Amnesty International classifies as “prisoners of conscience.”

"However, the Egyptian authorities must drop all charges against Alaa Abdelfattah, Mohamed Abdel Rahman, Wael Metwally and the 22 other protesters that stem from their peaceful exercise of freedom of expression and assembly."

Rights organisations expressed disappointment on Saturday at the decision to postpone the trial of 23 people charged with breaking the protest law in June 2013 until October 11.

The defendants have already spent 84 days in pre-trial detention, and were not granted bail.

Mesli expressed his "surprise" at the decision to release these three defendants.

“The Egyptian courts usually deal very harshly with journalists, opposition activists and anyone connected to the Muslim Brotherhood.

There are journalists who have not even been released on bail.”

'An exception to the rule'

Still, activists hope that the ruling could be a positive sign for detainees like Mohammed Soltan, a campaigner who has been on hunger strike in prison for the past 232 days.

His family on Monday morning demanded his immediate release, after he was transferred to the intensive care unit for the second time in 24 hour period as a result of the hunger strike.

A mass hunger strike to demand an end to the protest law is gathering momentum in Egypt, both inside and outside prisons.

Saturday saw activists start a hunger strike at the Journalists’ Syndicate in downtown Cairo to demand an end to the protest law and the release of all those detained under it.

Scores on steps of press syndicate in support of #EgyHungerstrike back to chants of pre-2011 against state security pic.twitter.com/QbRGsBbQpw

However Mesli, who has worked extensively on cases within the Egyptian judicial system, urged caution.

“The current logic of the Egyptian government is to continue the campaign of oppression. We still have not seen any signs of breakthrough or an improvement to the state of human rights in the country.

“This case is likely an exception, and not the rule. We aren’t hearing any good news – on the contrary, the repression is increasing by the day.

“The system today is totally illogical.”