A Syrian rebel fighter sits on a hill overlooking regime-held areas in northwestern countryside of Aleppo province. (AFP)
By
MEE and agencies

A deadline for all hardline rebels to leave a buffer zone in northern Syria passed on Monday, apparently without the withdrawal of the fighters in question.

The failure of all militant groups to leave the area puts question marks over a deal brokered by Russia and Turkey to avoid a bloody assault on the Syrian opposition's last redoubt in the country.

However, Turkish sources told Middle East Eye that the Russians, who back Syrian President Bashar al-Assad, were aware that the process of ridding the zone of hardliners may take longer than the agreed Monday deadline.

The key hardline group in question is Hayat Tahrir al-Sham (HTS), an alliance of rebel factions led by al-Qaeda's former Syrian affiliate. According to Turkish sources, at least 1,000 of the 5,000 HTS militants thought to operate in the buffer zone had left.

HTS has given no official line on whether it would abide by the deal Russia and Turkey hatched in Sochi or not. However, according to Turkish sources at least 1,000 of the 5,000 HTS militants thought to operate in the buffer zone had left.

Hours before the deadline, HTS issued a statement vowing to continue fighting. 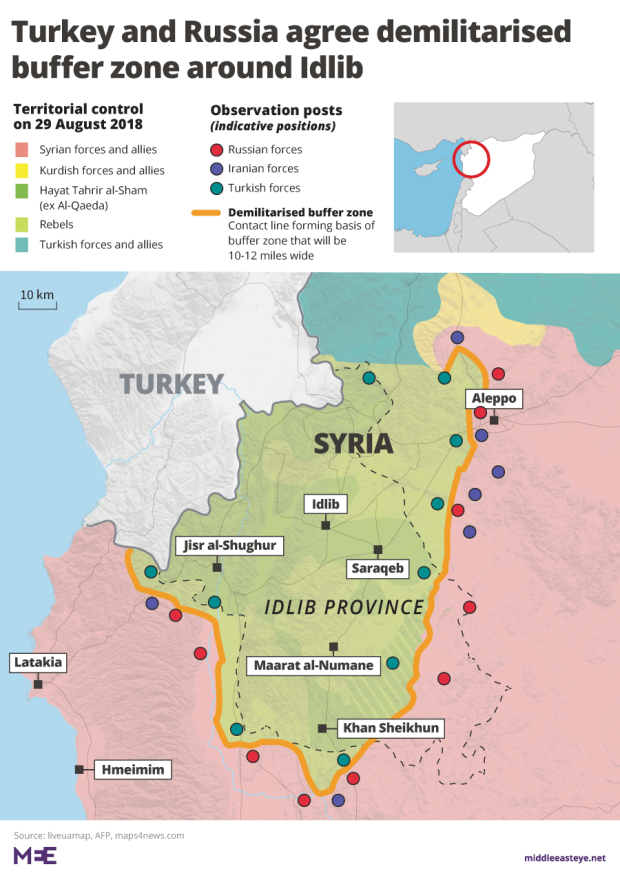 "We have not abandoned our choice of jihad and fighting towards implementing our blessed revolution," the group said.

"We appreciate the efforts of all those who strive inside and abroad to protect the liberated area," it added. "But at the same time, we warn of the deceitfulness of the Russian occupier."

The first part of the agreement - the withdrawal of heavy weapons - appeared to go off without a hitch as that deadline came and went on 10 October.

However the Syrian Observatory for Human Rights, a UK-based activist group monitoring the war, said no hardline militants were seen pulling out as the Monday deadline approached.

And deadly mortar rounds fired late Saturday from the buffer zone appeared to indicate the first part of the deal was not fully implemented either.

"The jihadists not withdrawing gives the regime and Russia an excuse to carry out a military operation at least within the demilitarised zone," Observatory head Rami Abdurrahman said.

HTS had likely "tried to gain time by neither explicitly refusing nor accepting the deal" between Russia and Turkey, he said.

According to Sam Heller, an analyst at the International Crisis Group, the HTS announcement appeared to be a "tacit agreement of the Sochi deal".

2. Most importantly: HTS emphasizes its responsibility and flexibility (within limits), which seemingly adds up to a tacit acceptance of the Sochi deal, even as it refuses to renounce “jihad and warfare as a means to realize the goals of our blessed revolution” generally. pic.twitter.com/wGBsD3nyWA

Though HTS has not publicly backed the deal or withdrawn all its fighters from the region, it has allowed free passage of Turkish troops through the Bab al-Hawa border crossing it controls to areas in Syria from where an offensive against hardline groups can be launched.

A senior commander in the Free Syrian Army, who refused to be named, told MEE that the Turkish military is massing in the Turkish region of Yayladagi, close to rebel positions in north Latakia and Jisr al-Shughur.

According to the FSA commander, these forces can move at any moment against any forces that could impede the application of the buffer zone agreement or disrupt Turkish military patrols.