Syrians forced into cages to queue for bread The images have sparked anger online, with the situation described as dehumanising and humiliating (Screengrab/Twitter)
By
Nadda Osman

Photos of people in Damascus being forced to wait in iron cages to queue for bread have sparked condemnation online.

According to media reports, the cages separated men, women and soldiers.

Social media users have used the images to highlight the deteriorating economic conditions in the country.

Syria has been devastated by nine years of a war which has displaced millions of people and taken a heavy toll on the economy.

Translation: This photo shows people queuing for bread in Damascus, but in reality, this is a photo showing Assad’s Syria. The nation is a prison and citizens, to the state, are just animals that live in cages.

Earlier this month, the Syrian government introduced rules limiting the amount of subsidised bread available per person at bakeries, putting larger families at risk of starvation.

Under the government's new rules, a household of two is entitled to one packet of bread per day, and families of seven or more people, are limited to four packets of bread, regardless of the number of people in the family.

Some have also used the images to criticise the Syrian government and Bashar al-Assad.

Translation: I do not understand what the thought was behind the cages, but I'm starting to realise that we have reached the peak of humiliation. When you have your most basic rights as a human being given to you in a dehumanising way from your government, that means you're in Syria.

Following widespread anger online, authorities in the Damascus governorate reportedly removed the cages and replaced them with markers on the ground.

According to reports by the UN, 90 percent of the Syrian population lives in poverty, which has been further exacerbated by the neighbouring economic crisis in Lebanon, as well as coronavirus restrictions and US sanctions.

Everyday necessities such as fuel, flour, rice and sugar are expensive, leaving many people unable to afford them.

Online, many have called the images dehumanising and humiliating.

Translation: A photo from in front of the Ibn Al Ameed bakery in the Rakn Al Din area in Damascus, to organise queues for people to receive bread. The regime is addressing the bread crisis in areas it controls with a 'security mentality', which translates into placing Syrians into cages, after queues went on for hundreds of metres.

This pic was taken in #Damascus last night. It's not enough humiliation for the thousands of people to queue for hours to get bread which is basic ingredient in our daily meals! No.
To organise the endless and troubled queues, it was decided to CAGE them! literally! #Syria pic.twitter.com/PHn3h75YSG

Earlier this month, Human Rights Watch reported that repeated attacks on civilian infrastructure by Syrian and Russian armed forces in Idlib may amount to crimes against humanity.

The report states that dozens of unlawful air and ground strikes took place from April 2019 to March 2020, on hospitals, schools and markets, killing hundreds of civilians. 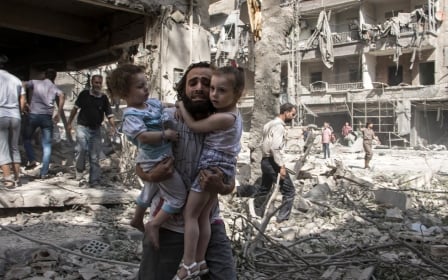