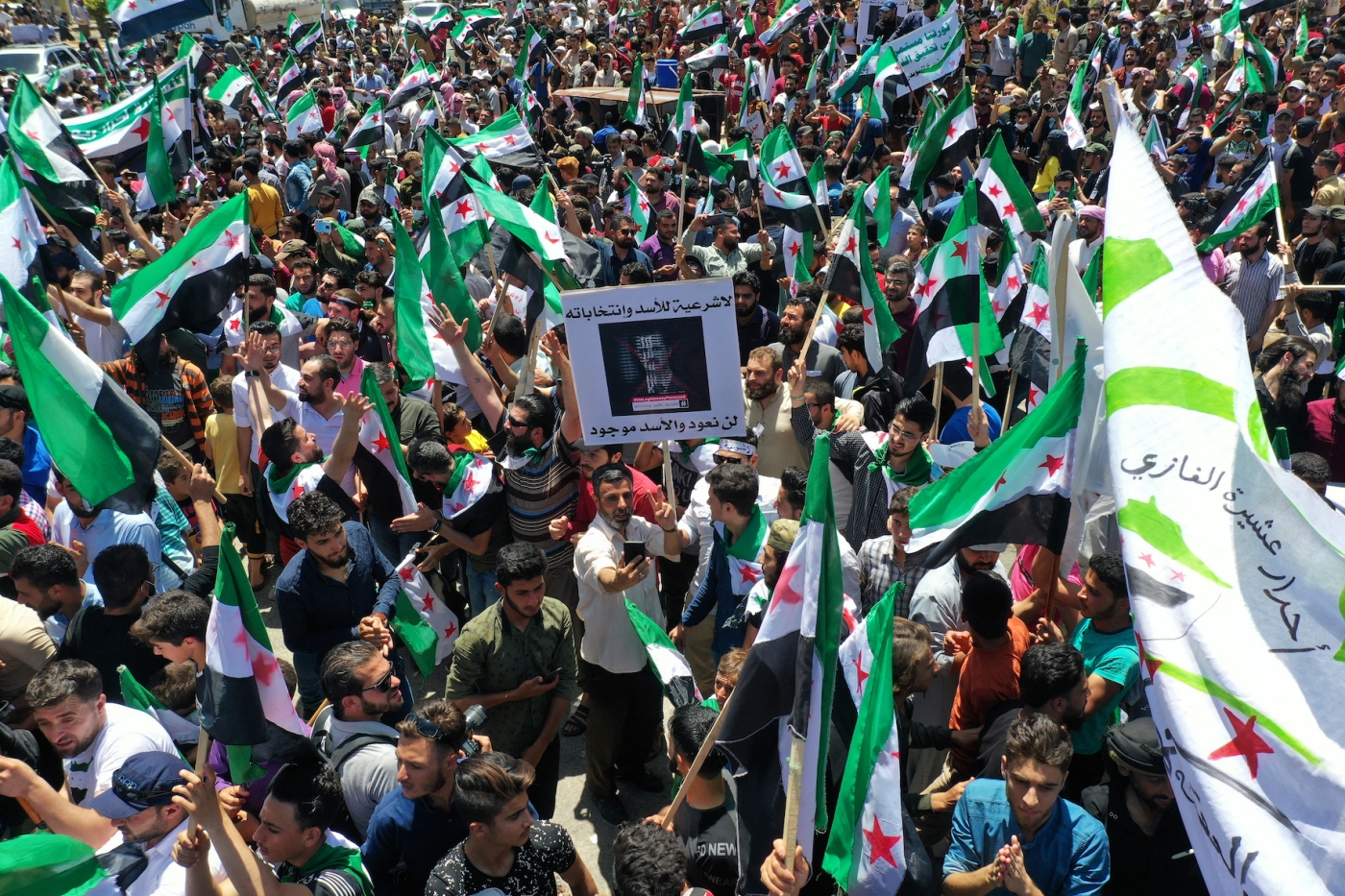 In government-held parts of Syria, voters flocked to the polls on Wednesday to cast their ballots in an election denounced by western nations as "neither free nor fair".

Meanwhile, hundreds descended onto the streets of the opposition-held city of Idlib to demonstrate against the elections, widely viewed by critics as a sham poll set to secure a fourth term for President Bashar al-Assad. Assad's government is accused of killing hundreds of thousands of civilians since the pro-democracy revolt of 2011.

Assad on Wednesday cast his ballot with his wife Asma in the Damascus suburb of Douma, a key opposition stronghold - and the site of one of the state's chemical weapons attacks - until its recapture by his forces three years ago.

"Your opinions have zero value," he said, addressing critics, while the exiled opposition described the vote as "farcical".

#Syria #Idlib
People in Idlib celebrate the Revolution on the same day of the 'elections' held in Assad-held regions. pic.twitter.com/OjHLwxRR4w

In a further act of defiance, the city of Idlib also held a general strike. In Images shared online, the city's streets were deserted, as stores closed their doors.

A general strike in cities and towns of the province of #Daraa and Rifha, protesting the "presidential elections" which will be carried out by the #Assad regime on Wednesday. pic.twitter.com/kqxlT6U5wD

As the last major opposition stronghold in the country, no vote will be held in the northwestern province of In Idlib, otherwise known as the “birthplace of the Syrian revolution”.

In a joint statement released on Wednesday, the United States, the United Kingdom, France, Germany and Italy collectively denounced the Syrian elections as fraudulent.

“We wish to make clear that Syria’s 26 May presidential election will neither be free nor fair,” the statement said.

Highlighting that all Syrian citizens had the right to vote, the statement went on to confirm that “for an election to be credible, all Syrians should be allowed to participate, including internally displaced Syrians, refugees and members of the diaspora, in a safe and neutral environment.

“We urge the international community to unequivocally reject this attempt by the Assad regime to regain legitimacy without ending its grave human rights violations.”

Assad, 55, first came to power in 2000 after the death of his father Hafez, who had served as president for 30 years.

Wednesday's vote is the second election since the start of the civil war that followed the 2011 uprising. The deadly conflict has killed more than 400,000 civilians and displaced at least half the pre-war population.

The last vote was in 2014, when Assad garnered 92 percent of a vote marred by his government's deadly bombing of rebel areas.

Only since 2014 has Syria been witness to multiple candidates on its ballot paper. Prior to that, referendums were held in the country in which the Assad family maintained widespread support.

This year, three candidates were included on the country’s ballot, including the incumbent president along with former minister Abdullah Salloum Abdullah and Mahmoud Ahmed Marei, a member of the domestic opposition widely considered part of the Assad regime.

Online, social media users have voiced their dismay at the current atmosphere in the country.

Although the election is taking place amid relative calm, the country is battling an economic freefall, with a surge in inflation, and more than 80 per cent of the population estimated to be living below the poverty line.

As Syria falls deeper into economic crisis, some have questioned the potential cost of coloured election posters which lined the country’s capital, pointing out that such campaigns were pointless when the outcome of the election was widely predictable.

someone sent me this video from Damascus: imagine how much each of these colored posters cost for an election whose results are already known in a country going through acute economic devastation pic.twitter.com/Vd6vPbTS6A

Meanwhile, others online have shared images of a poster that emerged on 25 May seemingly confirming and celebrating Assad’s re-election, despite the lack of confirmation of such a result.

Translation: Although the elections have not yet taken place.

Others have expressed their shock at the level of support for Assad in government-held parts of Syria.

In one video which has circulated online, members of the Syrian Syndicate of Pharmacists appear to be dancing to pro-Assad songs while holding posters of the president.

Translation: This happened in the pharmacists' syndicate in Damascus

One user re-posted the video, commenting “By the way, this is Syria, not North Korea”.

Images of Assad casting his vote in the city of Douma have also been widely shared online, with the president being accused of performative democracy.

I didn't think I had any capacity left to be shocked by Syria. I was wrong. He voted in Douma. There are no words. https://t.co/kpEyaX4Yeb

The location chosen for the Syrian president to cast his vote sparked controversy. Located 10km northeast of Damascus, the city of Douma witnessed numerous escalations of conflict during the early stages of the Syrian Civil War.

One of the most notable was in 2018, when the city was the target of four separate chemical attacks which occurred over the span of four months in which at least 49 people were killed and 650 others wounded.

As Syria enters its 11th year of conflict, it remains the world's largest source country of refugees, with 6.6 million having fled the nation since 2011, according to the United Nations.