Women walk amidst debris in the northern Syrian city of Raqqa, the former capital of Islamic State's 'caliphate' (AFP)
By
MEE staff

Syrian authorities should investigate the fate of thousands of people who disappeared while the Islamic State (IS) group controlled large parts of the country, Human Rights Watch (HRW) has said.

In a report released on Tuesday, the watchdog said authorities in areas that were formerly controlled by the armed group needed to make information readily available to family members seeking to find out the fate of their loved ones.

Highlighting the cases of 27 missing persons, HRW documented that people from all walks of life and professions were kidnapped after the group rose to power and established its 'caliphate' in 2014. 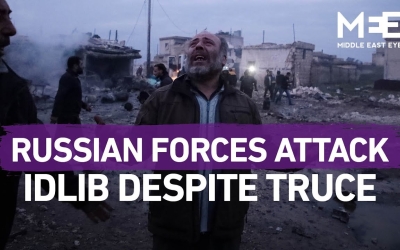 “What did this child do?” At least 23 killed by Russian attack in northwest Syria
Read More »

While the full scale of the number of missing is not known, the Syrian Network for Human Rights has documented 8,143 cases of individuals detained by IS whose fate remains unknown.

The missing include students, activists, aid workers and journalists.

During its rule in Syria and Iraq, IS imposed harsh punishments against those who violated its strict interpretations of Islamic law.

Torture and public executions were common as the group expanded it rule over vast swathes of territory.

Since the militant group's de-facto capital of Raqqa was overthrown by the Syrian Democratic Forces (SDF) in October 2017, there have been attempts by family members to petition authorities now controlling former IS-held areas to release information about their missing loved ones, HRW said.

However, there has been little response from these organisations, or from Syrian President Bashar al-Assad's government.

Attempts to speak to IS members in captivity have also been largely unsuccessful, with some family members even facing arrest as a result of their efforts, it said.

"The numerous crimes of IS include kidnapping and disappearing thousands of activists, journalists, and humanitarian workers as well as adversaries," said Joe Stork, deputy Middle East director at HRW, in a statement.

"Their families' anguish is only compounded by the failure of the authorities to prioritise uncovering information about what happened to them, almost a year after ISIS's defeat," he said, using another name for IS.

The report said there needed be a "centralised civilian body or focal point" in former IS areas to register cases of missing people and to provide public details on the process for finding out such information.

'Syrian regime does not give any information'

Among those whose cases were examined by HRW were three journalists for the Syrian opposition outlet Orient News - Abdel Kader Ateek, Obeida Battal and Hussam Nizam al-Deen.

The three were kidnapped in July 2013, while on an assignment in northern Syria.

According to the report, Ateek and Batal's fathers eventually found out from Iraqi sources that their sons had ended up in a Syrian government jail.

They said a contact had told them their sons were in Sednaya, a jail notorious for torture and extrajudicial killings. Despite paying large amounts of money to different people, they were unable to get confirmation of this from the Syrian government, who are also accused of disappearing thousands of people.

"We paid money but we were robbed - we are tired of this," Batal said.

"The Syrian regime does not give any information."

In another case, IS fighters took cousins Ayman Mustafa, 18 at the time, and Hussein Mustafa, 23, from their home in northern Raqqa, after they reportedly gave Syrian soldiers some water and let them camp in their cornfields.

Ayman's father Shaaban repeatedly went to IS headquarters to ask about the missing men but was constantly rebuffed.

"I gave them the names. They said, 'Come back after ten days'. I went back every ten days. I said [to IS]: 'If you've slaughtered him, just tell me'.

"We went many times. When I went there, they said 'Go ask another person'. They sent me back."

On Thursday, the SDF said they would be holding trials for 1,000 foreigners in their custody who are suspected of having fought for IS.

The group said the suspected fighters, who hail from more than 50 countries, will stand trial in Syria following a breakdown in negotiations that sought to repatriate them.

The announcement comes days after Syrian Kurdish officials met with the foreign minister of Finland for talks on the matter. "We explained our intention to set up a special court for ISIS to the Finnish government and asked for help from the legal and technical aspects, and that this trial be transparent and public," the group said in a statement, using another acronym for IS.

In its report, HRW said it had "abiding concerns regarding the ability of authorities controlling former ISIS areas to provide fair trial guarantees, due process, and other human rights guarantees".

"Human Rights Watch instead urges authorities on the ground to reform their judicial systems to comply with international standards, in line with recommendations made in prior reports in detail," it said.

The UN's International, Impartial and Independent Mechanism, established in 2016, is working to gather evidence that it hopes can assist international efforts to investigate and prosecute people who have committed crimes under international law in Syria since 2011.

Unlike the US, many European countries lack the laws needed to put such fighters behind bars for long periods of time, and even then, many countries fear the spread of radicalisation within prisons.

Instead of taking back their citizens en masse, most countries have only accepted repatriations on a case-by-case basis. In other cases, countries have chosen to revoke citizenship completely, rejecting any responsibility for their cases.

Iraq at War
Mosul: A city at a crossroads
Islamic State
How IS uses hacked accounts to flood Twitter with propaganda
Marc Owen Jones
Islamic State
The curious case of Jack Letts: A study in the mindless mill of UK law
Clive Stafford Smith