Palestinian refugees have endured bombings and sieges during the Syrian war. Now they face the confiscation of their houses 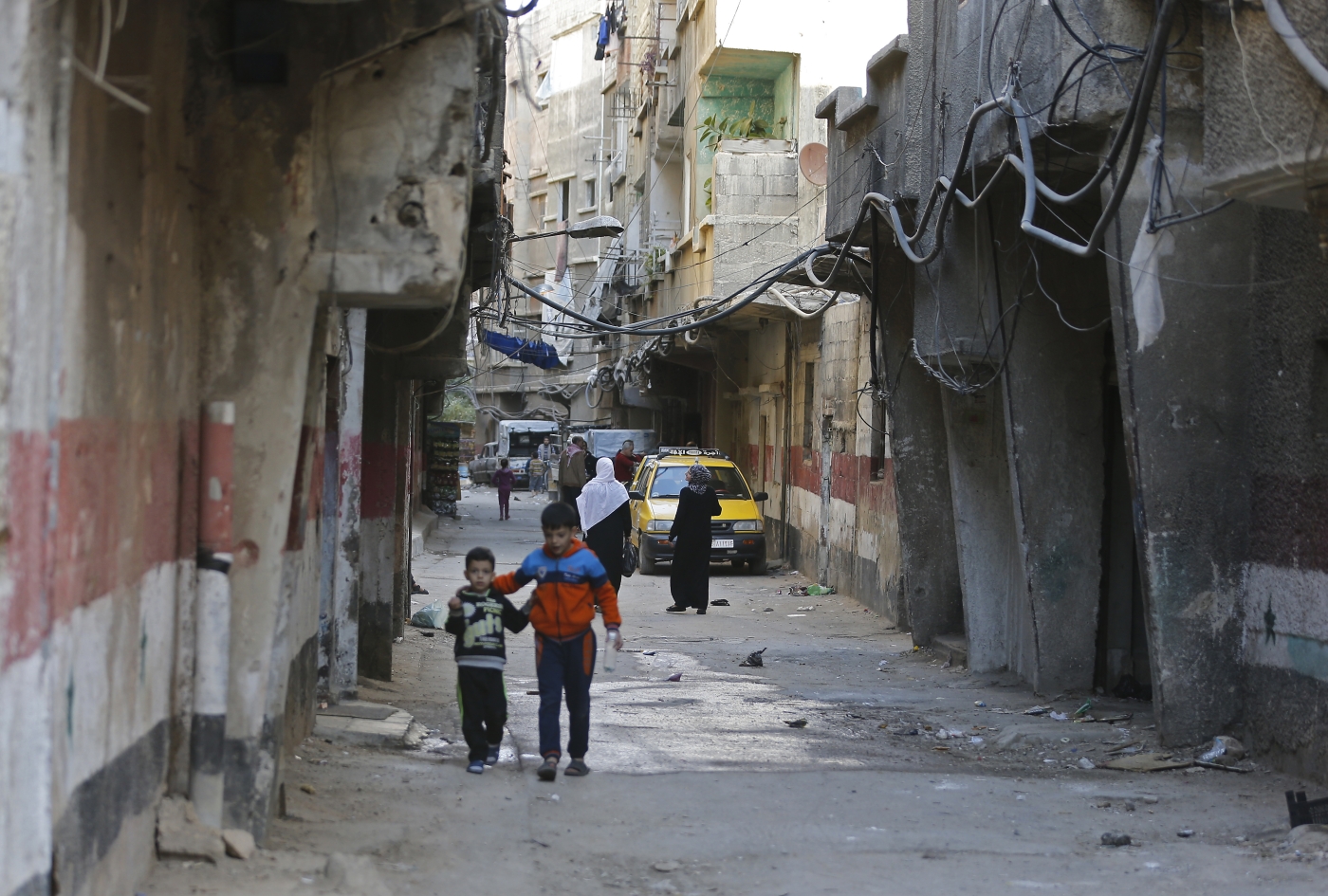 Children in the Tadamun neighbourhood, near the Palestinian Yarmouk camp, in Syria's capital Damascus (AFP)
By
Harun al-Aswad

Inside an old traditional Arab house between the opposition-controlled cities of Afrin and Azaz in northern Syria, Palestinian refugee Ammar al-Qudsi has done his best to settle in and make it feel like home. It's not home, though.

Qudsi - displaced during Syria's nine years of civil war - is a Palestinian-Syrian activist who raised his seven sons on resistance, steadfastness and struggle for the land and freedom, the basic principles he inherited from his fathers.

Born into displacement as his family was expelled from Palestine in 1948, he and his relatives are suffering a brutal deja vu.

'While Assad claims to support the Palestinian cause, he plans to demolish the rest of Yarmouk Camp'
- Ammar al-Qudsi, Palestinian refugee

Qudsi told Middle East Eye that Syrian President Bashar al-Assad's forces had displaced him from Yarmouk Palestinian refugee camp in Damascus and stolen and demolished his home, just as the Israelis did with the homes of his parents and grandparents in 1948.

The camp is adjacent to southern Damascus's al-Midan neighbourhood, and its two main streets, Yarmouk and Palestine, were known for their bustle and popular markets, drawing in Palestinians and Syrians at all hours of the day.

That pleasant hum of civilian activity was interrupted in early 2011, when peaceful anti-government protests against Assad broke out across the country, with the subsequent crackdown spiralling into Syria's ongoing civil war.

Many of Yarmouk's inhabitants participated in the popular uprising against Assad, and rebels and militants claimed control of it at different points until it was taken by pro-government forces in mid-2018.

Assad's forces had besieged, bombarded and eventually assaulted Yarmouk, destroying wide portions of the overcrowded camp. Tales of starvation under siege were notorious, with a shocking image released by the United Nations of Palestinians queueing among the ruins for aid making headlines around the world.

The militant fighters who held it and residents unwilling to live under Assad's rule again were in 2018 expelled to the east and north, where Qudsi now finds himself.

Many Palestinians such as Qudsi see Assad not as the defender of Palestinians that he portrays himself as, but as their butcher and now a thief.

Since March 2011, pro-government forces have killed 3,196 Palestinian refugees, including 491 under torture, and 2,663 others are still missing, since disappearing into intelligence prisons, according to the Syrian Network for Human Rights, a UK-based activist group.

“While Assad claims to support the Palestinian cause, he plans to demolish the rest of Yarmouk camp,” Qudsi said.

“Assad's soldiers led massive looting, including the stripping of informal concrete buildings' roofs to sell their iron as scrap."

What has been left standing soon may not be.

In late June, the Damascus governorate council announced the initial draft of a plan to renovate and reconstruct Yarmouk along the parameters of Law 10, a notorious piece of legislation introduced two years ago. Law 10 swiftly confiscates property, leaving Syrians residents displaced or without proper documentation and thus unable to challenge it. The plan divides the camp into three parts according to damage, and the draft can be challenged within 30 days.

Though the draft has only just been issued, Assad's government has been plotting the camp's overhaul for some time.

In early 2019, it replaced the head of the national committee for the Yarmouk camp, who had been a Palestinian independent of the government working in close coordination with UNRWA, the United Nations agency that supports Palestinian refugees.

That cleared the way to begin implementing Law 10, and demanding that residents returned to the camp to prove ownership of their property or see it seized and destroyed.

Several Syrian land registries have been destroyed during the conflict, and only 50 percent of Syrian land was officially registered, even before the war broke out, according to Human Rights Watch. For many Syrians and Palestinians, proving ownership is impossible.

Muammar Dakak, director of technical studies in the Damascus governorate council, announced early in July that Yarmouk residents would not receive alternative housing.

The draft plan has been widely condemned by Palestinian groups and advocates of all stripes, from the UK-based Action Group for Palestinians of Syria (AGPS) to the Hamas movement, which called for Palestinians to be allowed to return to their homes and renovate them themselves.

'There is no point in objecting or resorting to the Syrian judiciary. We are dealing with a gang, investing the Palestinian cause for its own interests'

Palestinian activists have launched widespread campaigns on social media and published a petition rejecting the plan, signed by more than 800 Palestinians and Syrians.

"We're the owners of a 70-year-old plot. This plan ends the symbolism of the camp," Thaer Abu Sharkh, a Palestinian refugee based in northern Syria and a campaigning activist, told MEE.

Fayez Abu Eid, an AGPS activist, told MEE that around 60 percent of the camp's 220,000 residents would be directly affected by the plan.

"The plan included the camp's houses, which are mostly without title papers, so they will be confiscated under Law 10," he said.

For Ayman Abu Hashim, a Syrian-Palestinian lawyer based in Turkey, the 15-year deadline set by the governorate council in late 2019 to implement the plan is a message to Palestinians to search for alternative housing.

Palestinians still in Damascus have lodged objections to the governorate council, which takes a fee for each objection. The outcome is yet to be declared.

"There is no point in objecting or resorting to the Syrian judiciary. We are dealing with a gang, investing in the Palestinian cause for its own interests," Abu Sharkh said.

The Syrian government has long eyed areas around the capital for development, and Yarmouk lies on the outskirts of a scheme known as the Basilia City project, which will develop over 900 hectares of residential neighbourhoods in southern Damascus.

It is similar to the infamous Marota City project, a glossy vision of newly built residential housing and malls built outside Damascus, which would be unaffordable for Syrians already struggling under a severe economic crisis.

No one can deny that Yarmouk is in need of renovation. Even before the war it was one of Damascus's poorest neighbourhoods, like all Palestinian refugee camps.

And it suffered under the control of the hardline al-Nusra Front and the Islamic State group, who seized the camp from the Free Syrian Army in 2015.

However, when Qudsi and other residents were expelled in 2018, they knew that the Syrian government was already making plans to level and develop their homes. Marota City, for instance, had been in the works since 2012.

"It is known that the camp's houses were demolished during the battles as part of Assad's organisational plans," Qudsi said.

"These dirty plans serve the goals of the Israeli occupation to separate the Palestinians and obliterate our identity."