Syria entered its third full day of a ceasefire on Thursday after it was extended for a further 48 hours on Wednesday, in spite of disagreements between warring sides and fears about delayed aid deliveries and Russian claims that the US was not abiding by the truce.

Russia's Defence Ministry said on Thursday the United States was using "a verbal smokescreen" to hide its reluctance to fulfil its part of a ceasefire agreement on Syria, including separation of moderate opposition units from "terrorist" groups.

But Russia's chief of staff, Valery Gerasimov, is still due to visit Ankara on Thursday amid the ongoing ceasefire to discuss Syria and the possibility of "military cooperation with Turkey," according to a statement carried by Russian news agency Interfax.

The visit to Turkey, which backs the opposite side to Russia in the war, comes as all sides report a significant decrease in violence across Syria, despite some key groups saying they would reject the ceasefire.

Russia has also said that pro-government troops will carry out a "phased" withdrawal from the strategic Castello Road into Aleppo on Thursday, as long as rebel groups make good on their promise to withdraw from the area at the same time.

A rebel leader in Aleppo, however, said on Thursday that he had little hope the simultaneous withdrawal and subsequent aid delivery would be successful.

Castello Road is the main supply route into Syria's divided and partially besieged second city, and is the route through which the UN is attempting to deliver aid into Aleppo.

Two aid convoys carrying essential supplies for some of the 250,000 people without access to the outside world in Aleppo were left stranded in no-man's land after crossing the Turkish border on Wednesday, with both Russian and rebel forces continuing the presence on the Castello Road.

United Nations Special Envoy to Syria Staffan de Mistura said on Thursday that there was a "problem" and that the government was refusing to allow access.

"The government, I repeat the government, was expected to provide facilitation letters - it's a bureaucratic word, translated into English, permits, authorisations," he said.

"Those facilitation letters, ie final permission for the UN to actually reach those areas (needing aid), have not been received," he said, adding that they were required immediately.

The Syrian government has always said it will not allow humanitarian aid into besieged areas of Aleppo without prior permission.

The initial truce, brokered last week by Russia and US, set out a two-day ceasefire to be followed by extensions.

If the truce holds for seven days, Russia and the US will discuss setting up a joint command to target groups considered terrorist by both sides, including the Islamic State (IS) group and Fateh al-Sham, the recently renamed version of Nusra Front.

The US state department on Wednesday said the secretary of state, John Kerry, had agreed to the truce extension with Russian counterpart Sergei Lavrov.

"There was agreement that as a whole, despite sporadic reports of violence, the arrangement is holding, and violence is significantly lower," a spokesman said.

"As part of the conversation they agreed to extend the cessation for another 48 hours," he added.

Senior Russian military officer Viktor Poznikhir had earlier said the extension would be agreed amid 60 violations by rebel groups since the truce came into force on Monday.

"We also note that some groups controlled by the United States, such as Ahrar al-Sham, have openly stated their unwillingness to cease fire," Poznikhir said.

"The greatest number of violations is associated with these groups."

The Syrian Observatory for Human Rights, a UK-based activist group, however, said it had not recorded a single civilian or combatant death from fighting since Monday.

It recorded a number of incidents of shelling by various rebel factions and of shelling and air strikes by pro-government forces around the country.

These incidents caused material damage and some injuries, but no deaths, it said on Wednesday. The Russian air force bombed IS targets north of Syria's Palmyra on Tuesday in the first such strikes carried out during the truce, the military said Wednesday.

"The battle against IS is continuing. Yesterday, Russia's air force bombed an area north of Palmyra where IS militants are concentrated," Poznikhir was quoted by Russian agencies as saying.

More than 20 Syrian opposition groups agreed to the ceasefire deal hours before the agreement was due to come into force. Some groups, however, have expressed hesitance about breaking with the al-Qaeda-linked Fatah al-Sham group, who they have teamed up with to fight the Syrian government but who, along with other hardline groups, are excluded from the truce and could yet be targeted by the US and Russia.

A Syrian opposition politician said on Wednesday that he did not have great confidence that the truce would last any longer than a previous one that temporarily curbed the fighting in February.

"There is not great confidence that this truce can last longer than the previous one," George Sabra told Reuters in a telephone interview. He also said the Syrian government's insistence on controlling aid was obstructing its delivery to Aleppo under the agreement.

Sabra said it was too early to talk about any resumption of peace talks, and that this hinged on the implementation of humanitarian clauses of a UN resolution passed last year.

Under the guidelines set out in the ceasefire deal between the US and Russia, both countries have been mandated to monitor whether all sides are adhering to the ceasefire.

Russia on Tuesday said it was following the truce, along with the Syrian government, but claimed that the US government had failed to rein in its affiliates within the Syrian rebels.

If the ceasefire holds for seven days, it will pave the way for the US and Russia to coordinate attacks on IS and Fateh al-Sham, formerly the Nusra Front, which has tried to distance itself from al-Qaeda. Neither the US nor Russia recognises the move. The Syrian government’s air force would also be grounded.

Last week, dozens of aid groups in Syria said they would suspend work with the UN over its alleged ties with Damascus, and demanded an investigation into how UN financial aid in Syria was ending up in government coffers.

The aid organisations, in a five-page letter to the UN, also called for the world body to be more transparent in conducting operations in Syria. 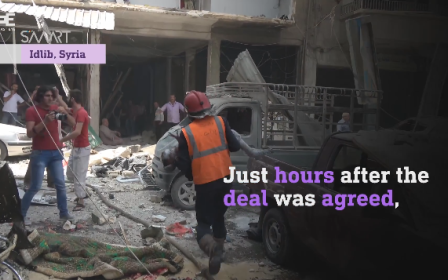