A paranoid schizophrenic knifeman who tried to behead a commuter in a London Underground station in a Syria war-inspired attack was sentenced to life behind bars on Monday.

Somali-born Muhaydin Mire, 30, said during the attack that he was doing it "for my Syrian brothers", while a bystander shouted at him "You ain't no Muslim, bruv" - a phrase that went viral online.

Mire attacked Lyle Zimmerman with a rusty knife as the 56-year-old walked through the tube station in Leytonstone, east London, on 5 December.

Zimmerman suffered serious injuries but recovered well after the attack.

He was sent Monday to begin his sentence at the top-security Broadmoor psychiatric hospital, where he was already being held for treatment.

Mire will serve a minimum of eight and a half years before he can possibly be considered eligible for release.

At the Old Bailey in London, judge Nicholas Hilliard said he accepted that Mire was suffering from paranoid schizophrenia at the time of the attack.

But he said he was also in no doubt that Mire was motivated by the conflict in Syria.

"Because Muslims were being bombed in Syria, he was going to attack civilians here," said Hilliard, the recorder of London.

Hilliard said he was sure that the "extremely serious violence" was intended "to intimidate at least a section of the public" in order to advance a "religious and extremist cause... namely Islamic extremism".

"This was an attempt to kill an innocent member of the public for ideological reasons by cutting his throat in plain sight for maximum impact," he said.

Hilliard said had the knife blade not broken from the handle, "it is hard to see that Mr Zimmerman would have survived the attack". 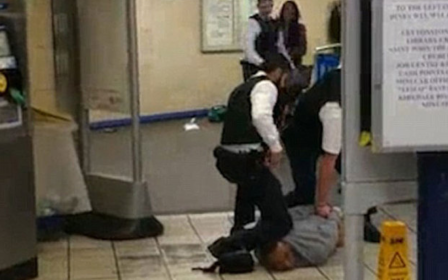