Though the group campaign against IS, they now fear the potential consequences of a coalition backlash An activist group in Syria has managed to pinpoint the location where Jordanian pilot Muaz al-Kasasbeh was burned alive by the Islamic State (IS).

Raqqa Is Being Slaughtered Silently (RIBSS), an anti-IS campaign group based in the IS ‘capital’ of Raqqa in northern Syria, produced a series of images on their Twitter appearing to show a location in the south of Raqqa, near the Euphrates River.

“It’s near a security building from when the regime controlled the city,” Abu Ward al-Raqqawi, an activist from RIBSS, told Middle East Eye.

He said it was the first time he had heard of IS immolating a prisoner, but that it was likely in retaliation for an airstrike by the coalition which killed 30 IS supporters, “mostly women.”

Many have quoted a saying from the Prophet Muhammad as proof that the execution was illegitimate: “fire should not be used as punishment except by God”.

In reply, IS released a statement – leaked by RIBSS on their twitter account - which many called a “fatwa,” explaining the legal reasoning behind the execution.

Quoting a number of medieval Islamic scholars, the statement notes a ruling by al-Muhallab that found that the saying “does not mean [the practice] is forbidden”

The statement goes on to note that, though some consider execution by burning to be completely forbidden, it is allowed in certain specific situations.

The statement bears a stamp from IS’s “Bureau of Research and Legal Rulings”.

The Kasasbeh video, titled “Healing the Believers Chests”, is – like many of IS’s videos - very slickly produced and clearly required a lot of resources.

A previous video released in November 2014 – shorter and less professional than the Kasasbeh one – was estimated by a researcher at the Terrorism Research & Analysis Consortium to have cost around $200,000 and required a director, producer and editor.

Raqqawi said that IS had a “media office to produce videos in Raqqa” confirming suggestions by analysts that their video production would require established, centralised offices.

RIBSS has been active in the city of Raqqa since it was controlled by the Syrian government.

“We have experiences learnt it when the Assad regime still controlled Raqqa,” Raqqawi told MEE.

He said his members “use Virtual Private Networks (VPN) and programmes to protect our surfing the net.”

“Our members in Raqqa send videos and pictures to us by Whatsapp, our team in Turkey put our logo on it and upload it.”

Despite their contempt for IS, who seized power in the city in 2013, they stated it would be “impossible” for Assad to regain control of the city.

RIBSS gain some further exposure in the hours following Kasasbeh's killing as it revealed that the pilot had in fact been killed on 8 January.

#Raqqa we said before that #ISIS KILLED THE PILOT THEY BURN HIM #Syria pic.twitter.com/WdAe2XSZ8Y

The anger in Jordan is palpable following Kasasbeh’s killing. While some have predicted this could mark the end of Jordan’s involvement in the anti-IS coalition, the Jordanian army has already threatened an “earth-shaking” response to the killing.

On Wednesday morning the Jordanian government executed Sajida al-Rishawi, an al-Qaeda operative whose release the Jordanians had been supposedly negotiating with IS in exchange for either Kasasbeh or a Japanese hostage Kenji Goto, who was killed by the militants on Saturday.

Raqqawi told MEE that he didn’t know how IS had responded to the executions, but that he was worried about the response from the coalition, “especially Jordan”, in the wake of the killing of the pilot.

He said that initial indifference to the US-led campaign against IS in Raqqa had led to emnity.

"People in Raqqa, until now, they don't have any problem with the coalition," he said. "Because they didn't kill any civilians by their airstrikes until now."

One of their latest tweets already warns that “coalition warplanes and Dronse (sic) are flying in the sky of Raqqa.” 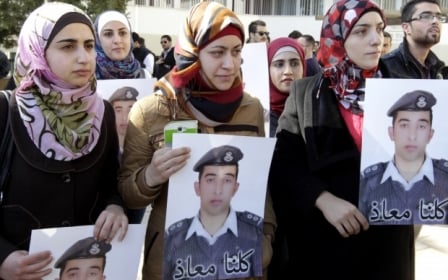