IS overran Palmyra on 21 May, sparking fears that the militant group might repeat the sort of vandalism it has carried out in Iraq The Syrian army has reopened a key oil supply route near Islamic State-controlled Palmyra, as the militant group has mined the city's ancient UNESCO-listed ruins.

However, the advance toward the central city from the west, reported by a pro-government newspaper and a monitoring group, and stepped up airstrikes, do not indicate an imminent offensive to retake it.

IS overran Palmyra on 21 May, sparking fears that the radical group might repeat the sort of vandalism it has carried out in Iraq and destroy one of Syria's most famous archaeological sites.

"The infantry has made tangible progress in the area of Biyarat al-Gharbiyeh," west of Palmyra, which had previously been in IS hands, said Al-Watan newspaper.

And the army had "intensified" its operations against IS in Palmyra and the surrounding area, the newspaper added.

The Britain-based Syrian Observatory for Human Rights, which has been monitoring the conflict, said the army was now 10 kilometres away from Palmyra.

The monitor, which relies on a network of sources on the ground, said that President Bashar al-Assad's troops had "chased IS fighters from Biyarat al-Gharbiyeh on the weekend".

Observatory head Rami Abdel Rahman said the capture of the area "allows the regime to secure a transport route for oil from the Jazal field... to other Syrian cities under its control."

Last week,  government forces recaptured Jazal - one of the few oil fields still in government hands and about 20 kilometres northwest of Palmyra - from IS.

Abdel Rahman said the government depends on gas and oil fields around Palmyra to provide electricity to cities under its control, namely Damascus.

He said the army's advances are just to protect these fields and that he doubted that an offensive on Palmyra was imminent, noting that the government has no popular support in the city.

The army's reinforcements to Biyarat al-Gharbiyeh came as Palmyra's new city was hit by heavy regime air raids in the past few days that killed 11 people, said the Observatory.

"The situation is very difficult for the city's civilians because of the raids and the lack of water and electricity," said a Palmyra militant who calls himself Mohammed Hassan al-Homsi.

The militants have laid mines in the spectacular Greco-Roman ruins of Palmyra, both the Observatory and Syria's antiquities chief, Maamoun Abdulkarim, said on Sunday.

It was not immediately clear if IS was planning to demolish the ruins, or if they had laid the mines in order to prevent the advancing regime forces from retaking the city.

IS has regularly heavily mined seized territory to make any recapture more difficult.

It has released several videos documenting its destruction of heritage sites in Iraq and Syria, since declaring a "caliphate" straddling the two neighbours a year ago.

In its extreme interpretation of Islam, statues, idols and shrines amount to recognising objects of worship other than God and must be destroyed.

"It is an important base for IS because it overlooks the roads linking its Raqa bastion to other strongholds in the provinces of Aleppo and Hasakeh," said the Observatory.

It added that IS fighters were now pulling out of the base.

Last week, Kurdish forces seized Tal Abyad on the border with Turkey, in a major blow to IS.

The town was a key conduit for foreign fighters and supplies into IS-held territory in Syria and for exports of black market oil from militant-held fields across the Turkish border. 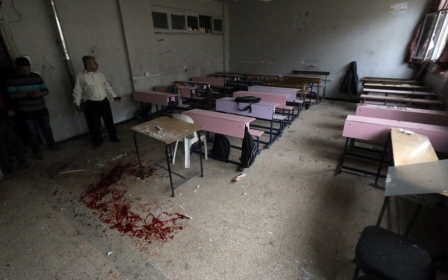