Syrian army claims 'mortal blow' against IS with recapture of Palmyra 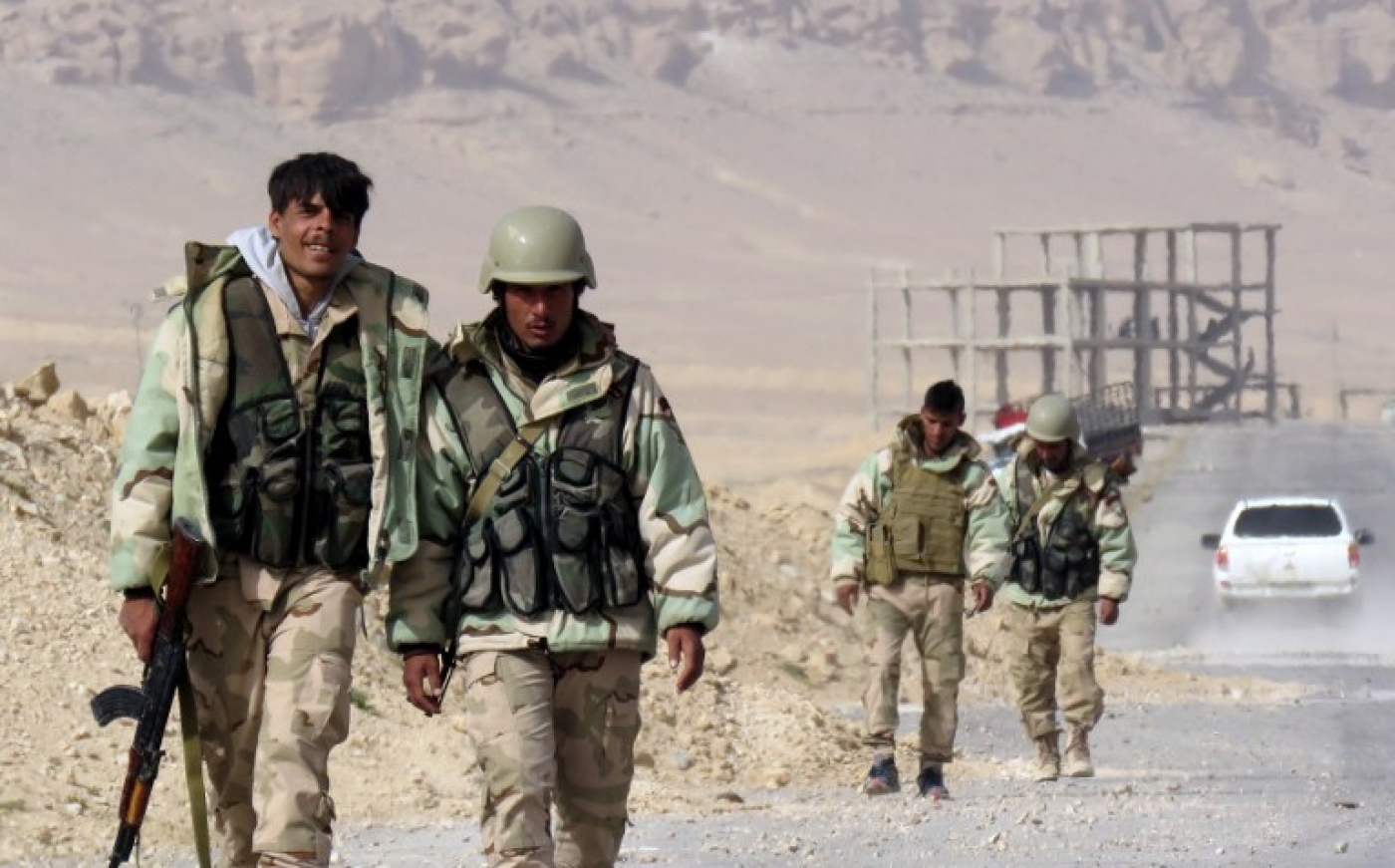 The Syrian army on Sunday claimed to have delivered a "mortal blow" to the Islamic State (IS) group as it announced the recapture of the ancient city of Palmyra after a days-long battle in which monitors said hundreds of IS fighters had been killed.

Speaking to visiting French parliamentarians in Damascus, Syrian President Bashar al-Assad also hailed the victory amid reports that IS fighters had abandoned the city and the surrounding area and were retreating eastwards towards the towns of Sukhnah and Deir Ezzor.

"This is an important achievement and fresh proof of the efficiency of the Syrian army and its allies in fighting terrorism," Assad said of the recapture of Palmyra, speaking during a meeting with French parliamentarians in Damascus.

Assad criticised the US-led coalition currently also waging an air campaign and backing non-Syrian government fighters against IS in Syria and Iraq, suggesting that the army's victory showed the coalition was "not serious about fighting terrorism".

In a statement, Syria's army command said: "This achievement represents a mortal blow to the terrorist organisation and lays the foundation for a great collapse in the morale of its mercenaries and the beginning of its defeat."

Russian President Vladimir Putin also congratulated Assad on the campaign to recapture the city which was backed by Russian air strikes.

Putin also said that Russian military personnel would work with Syrian forces to clear mines in the area.

"Despite the withdrawal of the main part of Russia's military contingent from Syria, the Russian armed forces will continue to help the Syrian authorities to fight terrorism and rid their land of extremist groups," Putin was quoted as saying by Russian state media.

The Syrian government has faced accusations that it deliberately allowed IS to grow in the early years of the Syrian war while concentrating on fighting the so-called moderate rebels of the Free Syrian Army and other opposition groups.

Analyst Charles Lister, author of The Syrian Jihad, wrote on Twitter on Sunday that Assad had ignored IS until August 2014, allowing it to "prosper and undermine the bigger threat: the opposition".

He said the Syrian government had been criticised even within its own support base last year for surrendering Palmyra without a fight, and that Assad would try to use the recapture of the city to resist calls for political transition at ongoing peace talks in Geneva.

#Assad regime ignored #ISIS for c. 18 months (April ’13 to August ’14), allowing it to prosper & undermine the bigger threat: the opposition

On Sunday morning, Syrian army sappers defused mines and bombs planted by IS in the city's ancient ruins, a UNESCO World Heritage site where IS forces sparked a global outcry with the systematic destruction of treasured monuments.

Local opposition activists said early on Sunday morning that IS were still in control of several suburbs of the city, despite a heavy Russian bombing campaign that has seen hundreds of sorties over the city in the past week.

However, Syrian army sources later said that IS fighters had pulled out,

Footage circulated by pro-government sites on Sunday showed fierce fighting involving tanks and artillery in residential areas of the modern city, which is also known as Tadmor.

In a televised statement on Sunday, the head of the Syrian armed forces said victory in Palmyra would help pro-government forces "tighten the noose" around IS, particularly in Deir Ezzor and Raqqa, the northern town that the group has taken as its de facto capital in Syria.

IS overran the Palmyra ruins and adjacent modern city in May 2015. While occupying the area, it blew up two of the site's treasured temples, its triumphal arch and a dozen tower tombs, in a campaign of destruction that UNESCO described as a war crime punishable by the International Criminal Court.

IS also used Palmyra's ancient amphitheatre as a venue for public executions, including the beheading of the city's 82-year-old former antiquities chief.

UNESCO chief Irina Bokova praised what she called the "liberation" of Palmyra by Syrian pro-government forces, pledging to cooperate with Syrian officials to send experts to assess damage to the ruins as soon as the security situation allows.

Antiquities director Maamoun Abdulkarim said much of Palmyra's old city was intact and his department would try to restore relics destroyed during the militants' nearly year-long rule over the city.

"We were expecting the worst. But the landscape, in general, is in good shape," he said.

"We could have completely lost Palmyra," said Abdulkarim. "The joy I feel [today] is indescribable," he told AFP in a telephone interview from Damascus.

The oasis city's recapture is a strategic as well as symbolic victory for Assad, since it provides control of the surrounding desert extending all the way to the Iraqi border.

IS, behind a string of attacks in the West including last week's Brussels bombings, is under growing pressure from Syrian and Iraqi military offensives to retake key bastions in its self-proclaimed "caliphate".

On Thursday, the Iraqi army announced the launch of an offensive to recapture the second city of Mosul, held by IS since June 2014.

'Heaviest losses' for IS

IS lost at least 400 fighters in the battle for Palmyra, said the Syrian Observatory for Human Rights, a monitoring group.

"That's the heaviest losses that IS has sustained in a single battle since its creation" in 2013, Observatory director Rami Abdel Rahman said.

"It is a symbolic defeat for IS comparable with that in Kobane," a town on the Turkish border where Kurdish fighters held out against a months-long siege by IS in 2014-15, he added.

Russian forces, which intervened in support of longtime ally Assad last September, have been heavily involved in the offensive to retake Palmyra despite a major drawdown last week.

Russian warplanes conducted more than 40 combat sorties in just 24 hours from Friday to Saturday, targeting "158 terrorist" positions, according to the Russian defence ministry.

Elsewhere in Syria, a ceasefire in areas held by the government and opposition rebels has largely held since 27 February, in a boost to diplomatic efforts to end a five-year war that has killed more than 270,000 people.

The recapture of Palmyra sets government forces up for a drive on IS's de facto Syrian capital of Raqqa in the Euphrates valley to the north.

"The army will have regained confidence and morale, and will have prepared itself for the next expected battle in Raqqa," a military source said on Saturday.

With the road linking Palmyra to Raqqa now under army control, IS fighters in the ancient city can only retreat eastwards towards the Iraqi border.

Palmyra was a major centre of the ancient world as it lay on the caravan route linking the Roman Empire with Persia and the east.

Pledging Russian support for the offensive to retake the city earlier this month, President Putin described it as a "pearl of world civilisation".

Situated about 210 kilometres (130 miles) northeast of Damascus, it drew some 150,000 tourists a year before it became engulfed by Syria's devastating civil war. 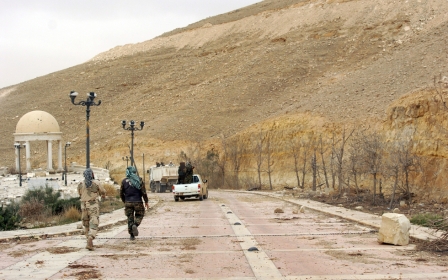