Syrian army command said on Friday that Israel fired rockets at a major military airport west of the capital Damascus and warned of the repercussions of what it termed a "flagrant" attack.

Syrian state television cited the army as saying several rockets were fired from an area near Lake Tiberias in northern Israel just after midnight and landed in the compound of the airport, a facility for Syria's elite Republican Guards, and warned it would take revenge for the attack.

"Syrian army command and armed forces warn Israel of the repercussions of the flagrant attack and stresses its continued fight against [this] terrorism and amputate the arms of the perpetrators," the army command said in a statement.

The statement did not disclose if there were any casualties, but said the rockets caused a fire.

Asked about Friday's incident, an Israeli military spokeswoman said: "We don't comment on reports of this kind."

The cause of the explosions was not immediately clear, but a regional defence expert and a senior Syrian rebel source said the sounds heard in parts of the capital suggested they could be Israeli warplane strikes.

Israel has in the past targeted positions of Lebanon's powerful Hezbollah group inside Syria.

Israeli defence officials have voiced concern that Hezbollah's experience in the Syrian civil war, where it has played a significant role and recently helped the Syrian army regain the eastern sector of the city of Aleppo, has strengthened it.

Rebels operating in the area have said Hezbollah's major arms supply route into Damascus from the Lebanese border has been targeted on several occasions in recent years by air strikes. This has included strikes on convoys of weapons and warehouses.

Damascus airport was also hit by air strikes in 2013. 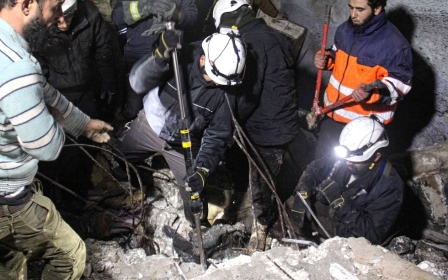