This year's Easter ceremonies were sombre for Christians in Syria, with intensifying attacks leading to fears for the minority's future Easter should be a time for peace and prayer, but for Christians in Syria, the holiday weekend was marred by the aftermath of violent attacks.

In an interview with the BBC this week, Father Nawras Samour, Head of the Jesuit Relief Service, said he is “afraid about the future of the Christian community”. In his view “The majority of Christians, if they had the possibility to get out of Syria and be asylum [seekers] elsewhere, they would leave. 90 percent I would say.” He does point out though that “on the other hand some people have made the decision to stay.”

Christians make up some five percent of Syria's population and have largely avoided taking sides in the conflict that erupted in March 2011.

In one of the most recent attacks on the community, a mortar round hit a Christian school near a church on Tuesday, injuring 60 children and staff members.

UNICEF said the attack “was is a stark and horrific reminder of the violence that children across Syria are enduring on a daily basis”.

On 8 April, a well-known and much loved Dutch Jesuit priest was murdered in Homs. Father Frans van der Lugt, 75, was gunned down in his monastery by an unknown assailant.

Tuesday also marks the first anniversary of the kidnapping of two bishops, Yahan Yohanna Ibrahim and Boulos Yazigi, in Aleppo. Mystery still surrounds the disappearance of the two men, one of whom is the brother of the Greek Orthodox patriarch. No ransom requests have been made and there has still been no contact with the kidnappers.

Some of the stories had a happier ending. In December 2013, the militant group Jabhat al-Nusra attacked a convent in Maalula in Qalamoun and kidnapped 16 people, including 13 nuns and three of their helpers. They were then held in Yabroud before finally being released on 9 March, reportedly in a deal that included a ransom payment and an exchange of detainees.

Some Christian residents of Maalula were able to return to the historic Christian town on Sunday to mark Easter, a week after government troops freed it from rebel control.

Flanked by reporters on a government-organised tour, President Bashar al-Assad also paid a rare visit there on Sunday.

Ruba, a Christian woman in her 20s, cast her eyes over the destruction of her one-time home and said: "Maalula is ours again even though it is destroyed."

"Our Easter celebration this year is incomplete," she said.

For her and other Christians in Syria there is little to celebrate, with many having lost loved ones during the three-year conflict.

"You can replace stones, but you can't bring people back to life," said Ruba.

"Our feelings are of joy and pain at the same time. We came home and found everything destroyed, but God willing, we will return and rebuild. This is our town," said Elias Zakhem, a university student.

One of the Middle East's oldest Christian settlements, Maalula was caught up in Syria's brutal conflict because of its strategic location in the Qalamun mountains.

Cut into the cliffs of rugged mountains, it lies 55 kilometres north of Damascus and near the Lebanon border in one of the fiercest battlegrounds of the war so far.

Five months into a regime offensive against rebel positions in Qalamun, the army backed by its Lebanese Shiite ally Hezbollah has taken over most opposition-held towns and villages there.

Houses have been burned down, windows shattered and broken glass carpets the ground, said an AFP correspondent who toured the town on Sunday.

Religious sites were not spared. At the orphanage of Saint Takla monastery, where a group of nuns were kidnapped by jihadists and held three months before being freed, children's clothes were strewn across the floor, books thrown off their shelves and plates shattered.

Dalal, a mother of three, tearfully looked at the damage caused to the place she called home for 14 years until fighting pushed her family out.

"Even the walls have been torn down. They broke the children's digital piano. The toys, even they are gone," she said.

She recalled the "wonderful" Easter celebrations they had before the war when the town would be decked in flowers and other decorations.

Dalal said she came alone without her children for fear they would be heartbroken by the devastation.

"I want them to preserve in their memory the beauty that this house and this town once had. I don't want them to come now, to be shocked by all this."

Sunday's visit by Assad was organised by the authorities, and troops were deployed in the main square backed by pro-regime fighters. State television said Assad visited Saint Sergius and Bacchus monastery, which had been damaged by "terrorists".

"Even the worst terrorists cannot erase our heritage and civilisation," he was quoted as saying, using the regime's terminology for rebels seeking his overthrow.

"Like other Syrian sites of heritage and civilisation, Maalula will always resist in the face of the barbarity and obscurantism that are targeting the country."

Assad's regime has sought to portray itself as the protector of religious minorities against a revolt led by foreign-backed extremists, a notion his opponents dismiss as part of a divide-and-rule strategy also aimed at deterring Western support for rebels.

Greek Orthodox Patriarch John Yazigi told reporters in Maalula "we in Syria want peace... and to live side by side." 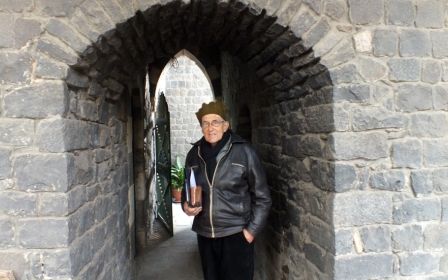