Civilians are the primary victims of "rampant, pervasive and ever-present" war crimes in the Syrian war, a new UN report said on Monday.

The report, issued by an independent UN commission of inquiry into Syria, calls for accountability for horrific crimes committed during the war to be included in the peace process.

The report also took aim at world powers backing Syria's peace process for "paradoxically" seeking a settlement while feeding a recent escalation on the battleground.

"As the war is poised to enter its sixth year, its horrors are pervasive and ever-present," the panel said in its 11th report on human rights violations in Syria.

Civilians remain the "primary victims," often targeted for deliberate attacks by all sides, and the lives of Syrian men, women and children have been ravaged, the report said.

"War crimes by the belligerents are rampant," it added.

As the United States and Russia worked to piece together a ceasefire ahead of peace talks, the commission emphasized that those responsible for war crimes must face justice.

"Accountability is an essential part of this process," the report said.

The commission renewed its appeal to the UN Security Council to refer the situation in Syria to the International Criminal Court for war crimes investigations.

A bid in May 2014 to ask the ICC to look into war crimes in Syria failed when Russia and China vetoed the request at the UN Security Council.

Violence has surged in Syria following Russia's decision in September to launch air strikes in support of President Bashar al-Assad's forces and the battlefield is becoming increasingly crowded.

"The proliferation of warring parties and front lines has challenged the ability of civilians to survive even further," said the report.

The US and Russia are pushing for a partial ceasefire that would apply to Syrian government forces and rebel fighters, but not groups labelled “terrorist” by the UN Security Council. Russia and Syria disagree on which groups should be considered "terrorist".

"Paradoxically, the international and regional stakeholders that are ostensibly pushing for a peaceful solution to the war are the same that continue to feed the military escalation," the 31-page report said.

Syrian forces are increasingly reliant on foreign militias to carry out attacks while rebel armed groups are losing ground.

"Anti-government armed groups have failed to sustain the offensive momentum that allowed them to make significant gains in the first months of 2015," it said.

The latest report documents atrocities committed from July 2015 to January 2016, based on 415 interviews conducted in the region and in Geneva.

These include attacks on homes, business, schools, parks, markets and hospitals, along with cuts to electricity and water in besieged areas.

"Indiscriminate and disproportionate attacks on the civilian population must be brought to an end," said the commission, which will formally present the report to the UN Human Rights Council in Geneva next month.

Led by Brazilian academic Paul Sergio Pinheiro, the four-member commission has been denied entry into Syria since it was established in 2011. 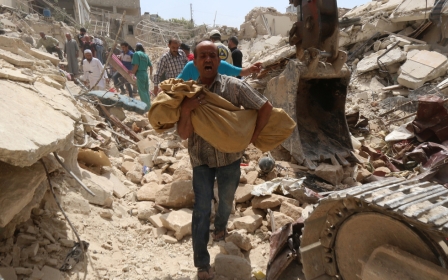