Syrian government strikes back after rebels break siege of Aleppo Syrian rebels who broke a government siege of eastern Aleppo on Saturday in a significant territorial gain came under intense air attack from pro-government forces on Sunday trying to repel the advance, which also cut government-held Aleppo's main supply route.

Still, the rebel alliance on Sunday said that it intends to recapture the whole of Aleppo. The "Army of Conquest," a coalition of rebels and militants including the former al-Nusra Front, said in a statement it would "double the number of fighters for this next battle... We will not rest until we raise the flag of conquest over Aleppo's citadel".

Rebels took most of a large government military complex southwest of Aleppo city in a major offensive begun on Friday to break the month-long siege and are now attacking further into government-held territory.

The surprise advance in Ramussa allowed fighters from rebel areas in western Syria to break through a strip of government-controlled territory on Saturday and connect with fighters in the encircled sector of eastern Aleppo.

Current overview of the situation in #Aleppo after Rebels managed to create a ~2.5 km wide corridor, breaking siege. pic.twitter.com/FHAjv5iHrs

But fierce fighting and continuous Russian and Syrian air strikes in and around the Ramussa area mean no safe passage for besieged east Aleppo residents has been established, activists and the Syrian Observatory for Human Rights said.

Rebel gains this weekend could change the balance of power in Aleppo, after Assad said a siege by government and allied forces on rebel-held east Aleppo in early July was a prelude to retaking the city. The loss of Aleppo would be a crushing blow for rebels.

"We have now seized full control of the Ramussa area... We are in our trenches but there are insane air strikes of unprecedented ferociousness. The regime is using cluster and vacuum bombs," said Abu al-Hasanien, a senior commander in Fateh Halab, the coalition of moderate rebel groups inside the city.

Syria's government is battering the rebels who broke the Aleppo siege https://t.co/HBz2AISzvL pic.twitter.com/PZ8RAFChTD

Pro-Syrian government news channels have mostly played down the rebel gains and say Syrian army efforts have caused rebels to withdraw from some recently gained areas.

But Lebanese pro-Syrian government news channel al-Mayadeen said late on Saturday the Syrian army had "withdrawn from a number of positions southwest of Aleppo and repositioned itself in new defensive lines".

Official media denied the siege had been broken, but implicitly admitted that government forces were on the defensive, reporting new air raids on Sunday and saying that pro-government areas were facing shortages in the country's ravaged second city.

State television said on Sunday: "Our forces have redeployed after absorbing the attack of thousands of mercenaries, and the army has found a new route to allow food and gas in."

The official SANA news agency later quoted a military source as saying that "the air force conducted 21 sorties and struck the terrorists 86 times in south and west Aleppo in the last 12 hours".

As the rebels took over parts of the government's Ramussa military complex, which contains a number of military colleges, they broadcast images of the weaponry and ammunition they were taking possession of.

The rebel frontline is now pushing northwest into government-held Aleppo on the edges of the Hamdaniya neighbourhood and a housing estate called the 3,000 project, rebels and the Observatory said.

North of Hamdaniya in the direction of the rebels' push is another large government military complex, the Assad military engineering academy.

The opposition Syrian National Coalition congratulated rebels on making "spectacular gains [which send] a clear message to the Assad regime, Iran and Russia that they will not be able to defeat the Syrian people or dictate the terms of a settlement".

Fears are growing in government-held western Aleppo that it might become besieged by rebels, as east Aleppo has been by government forces, because the main route south to Damascus for goods transport, the Ramussa road, has been severed.

News of the rebel advance caused food prices to rise by as much as four times in western Aleppo, the Observatory said.

Following the cutting of the main Ramussa road, Observatory director Rami Abdurrahman told Reuters that military vehicles can still get in and out of west Aleppo through remaining exit roads to the north, but these are not safe enough for civilians.

In eastern Aleppo, despite some scenes of celebration as fighters broke the siege yesterday, the lack of a safe route out means conditions for residents remain unchanged.

Three vans of vegetables crossed into east Aleppo, Abdurrahman said, but this was a symbolic gesture and the corridor is too dangerous for civilians or significant supplies to pass.

After 30 days of Siege, East #Aleppo gets first aid convoy, not from UN, but nearby rebels. Via @nadamant pic.twitter.com/2gnSiJr5hj

"Most recently I'm hearing that the markets are closed and it's next to impossible to purchase food. The UN estimates that collectively all aid supplies in east Aleppo will only last about two more weeks," Christy Delafield, senior communications officer for Mercy Corps, which runs the largest non-governmental aid operation inside Syria, told Reuters.

"Getting aid to those that need it is more dangerous than ever and the more time that goes by before new stocks can be brought, the worse it will get. These vulnerable families were already living on the edge," Delafield said.

The multi-sided civil war in Syria, which has been raging since 2011, has drawn in regional and global powers, caused the world's worst humanitarian emergency and attracted recruits to Islamist militancy from around the world. 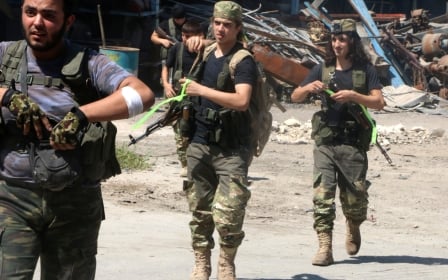