The YPG are eager to take the IS capital, in part to revenge IS massacre in Kobane 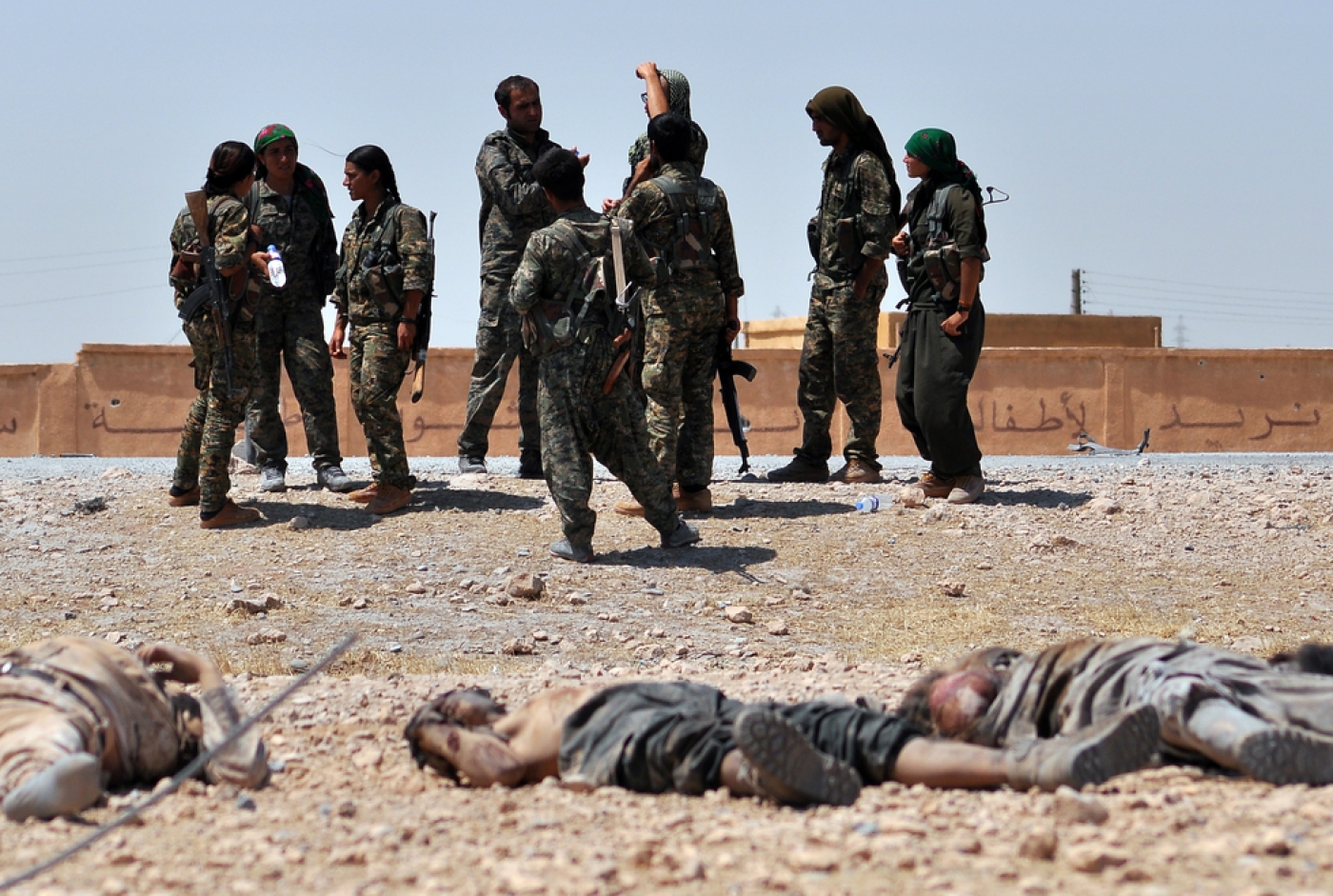 Fighters from the Kurdish People Protection Unit (YPG) stand next to the bodies of unidentified fighters near the Syrian town of Ain Issi, some 50 kilometres north of Islamic State group capital Raqqa, on 10 July 2015. (AFP)
By
Wladimir van Wilgenburg

TAL ABYAD, Syria – While the Kurds in Iraq have been reluctant to take the Arab city of Mosul, Syrian Kurds seem to have no reservations about capturing the Arab-majority city of Raqqa - a feat they hope to achieve in cooperation with local Arab forces.

The eastern Syrian city has been the Islamic State group's Syria headquarters since last year, but the anti-IS alliance has been edging closer and now stands about 50 kilometres away.

No one knows when exactly the final drive will take place, but fighters are keen to stress that preparations are underway.

"It will happen soon, but how or when, that's military information," said a local YPG commander Heval Amude. "We are preparing our best."

The pushback began last year, when IS besieged the Kurds for 134 days in the border city of Kobane. They looked poised to take the city and the border, but in January, IS was defeated with the help of US coalition airstrikes, and the Kurds became the best allies of the US-led coalition against IS. The town has since become a symbolic status among Kurds as a city of resistance against the IS and the world and the victory has helped buoy the Syrian Kurds to march further south and east.

Over the summer, the Kurds managed to push IS further out from the Syrian-Turkish border, by capturing Tal Abyad and Ayn al-Issa, 50 kilometres from Raqqa.

IS retaliated and launched a revenge attacks in June killing 233 Kurdish civilians, including women, children, and the elderly, but the Kurds have vowed to push on. The Kurds are now planning to turn the tables by attacking the Arab-dominated town of Raqqa, with the support of the United States.

Unlike the Kurds in Iraq, the main Syrian Kurdish fighting force the People’s Protection Units (YPG), has no objections to take the IS capital in Syria.

Some say they are looking for revenge. A YPG fighter in Kobane who lost many of his friends told Middle East Eye:  “When we were fighting in Kobane, our mind was on Raqqa.” But there are many other factors also at play. The Kurds in Iraq fear that taking the IS capital of Mosul would exacerbate existing tensions with local Arabs. In January 2009, an Arab nationalist coalition named after Mosul’s minaret al-Hadba won 19 of Mosul’s provincial council seats, and expelled the Kurds from the local council.

When Islamic State took control in June 2014, the Iraqi army and Mosul’s politicians fled. Many were forced to take refuge in Iraqi Kurdistan.

Now, the United States is pushing the Kurds and the Iraqi government to retake Mosul, but the Iraqi Kurds are reluctant to be seen as occupiers in Mosul. They argue that they could only assist an Iraqi army offensive, which has been slow to come.

“We don’t think the people will be happy with [Iraqi Kurdish] Peshmerga [in Mosul],” said Kurdish Peshmerga commander Sirwan Barzani in his base close to the frontline last month.
“If we do something, it could be a problem between Arabs and Kurds.”

In Syria, however, the Kurds want to play a leading role in taking the IS capital of Raqqa, and the US administration would welcome any move on Raqqa, although this is likely to anger Turkey.

While the Iraqi Kurdish Peshmerga force does not recruit Arabs, the Kurds in Syria recently formed a new coalition of Arabs, Kurds and Christians, the Syrian Democratic Forces (SDF), which would play a key role in taking the city of Raqqa.

Last week, news broke that the SDF had agreed to launch an assault in exchange for US weapons.

“We met the Americans and this has been approved and we have been told these new arms ... are on their way," Abu Muazz, a spokesman for the Raqqa Revolutionaries Front - a grouping of largely Arab opposition fighters who have joined the SDF – said in a statement published by Reuters.

The YPG though say that they do not plan to stay in the city long.

“We don’t want to take Raqqa,” said Heval Jiyan, a German fighter with the YPG since 2011. “After we clean it up from IS, we will go back to our places, and give Raqqa to an Arab force.”

The YPG says it wants to build an Arab force that can work with the Kurds to protect their areas. “We have to build up a strong Arab force who can manage the social life of Arab society,” said Jiyan. “There is no other movement who can do this.”

Currently, there are more than 5,000 Arab fighters of different groups that cooperate with the YPG.

The Kurds have been plagued by allegations of possible war crimes in Syria, with Amnesty International accusing their forces of levelling Arab villages and displacing thousands of Arab villagers. The Kurds deny this and insist they are working well with their Arab neighbours and are doing everything they can to recruit more fighters through the US-backed Syrian Arab Coalition, which include fighters of the Free Syrian Army from Raqqa and Deir ar-Zour, as a tribal fighters from the Shammar tribe in Hasakah.

But recently, a new tribal army was formed by Abu Isa al-Raqqawi, the leader of the Raqqa Revolutionaries Brigade. The hope is that with US weapons and YPG training Arab support for the Raqqa offensive will continue to grow.

Dispelling fears of the YPG

If the Kurds take Raqqa, Kurds and their Arab allies alike suggest that Abu Issa will most likely take a major role in the future administration of the city.

"After the liberation of Raqqa, the Raqqa Revolutionaries Brigade will control the city, and defend it," said FSA fighter Abu Hamza.

Nevertheless, not all Arabs feel comfortable with the Kurds controlling a city like Tal Abyad, although some still say they would prefer security to instability. The strategically key border town rests 70 kilometres north from Raqqa and has been in YPG hands since June.

The anti-IS monitoring group Raqqa Is Being Slaughtered Silently, which is run by Arab activists from Raqqa, calls the YPG forces “a synonymous occupier to [Syrian President] Bashar al-Assad’s regime and ISIS.”

“For now it’s okay,” said Ibrahim al-Habo, 50, about the Kurdish control of Tal Abyad. “But I don’t know about the future.”

While the Kurds want to include Tal Abyad as part of the local administration of Kobane, most Arabs in Tal Abyad are against this, including the FSA rebels.

“I think it’s better that it remain part of Raqqa province,” Habo said.

Although Raqqa is an Arab majority city, the Kurds say they want to take the city for not only military, but also ideological reasons.

A YPG spokesperson told McClatchy that the Syrian-Turkish border town of Jarabulus, not Raqqa, is the primary objective. The border town is some 25 kilometres west of Kobane and 100 kilometres northwest of Raqqa but Kurdish officials say the two towns are interlinked.

“We cannot capture Jarabulus without taking Raqqa, After that we can create one canton administration,” said Heval Nemir, a 25-year-old YPG fighter.

One of the main priorities of the Kurds is to link the encircled enclave of Efrin, northwest of Aleppo, with Kobane, by clearing out IS villages around the Syrian-Turkish border on the other side of the Euphrates river, including Jarabulus. They would also like to secure their southern borders against IS attacks.

Uniting Arab and Kurd against IS

Some Kurds insist that the widespread suffering inflicted on Kurds and Arabs alike by IS could help fuse the two communities going forward.

“Daesh [IS] killed many Arabs, not only Kurds. We fight for humanity, not for money, or a state,” said Nemir.

“The main reason we want to attack Raqqa is because IS sees Raqqa as their capital, and they based all their administration there,” Ismet Sheikh, a senior defence minister in Kobane, told MEE. “After we take Raqqa, we can easily control Jarabulus, and can isolate Daesh,” he said. “We want to fight Daesh [IS] everywhere,” he added.

In order to have any kind of a future though, Syrian Kurds realise that they must remove IS from their borders. “We must clean all this area of Daesh [IS] until the Euphrates River after Raqqa,” Heval Kalhor said on the frontline in Ayn al-Issa. “If Daesh [IS] is removed, it would be better for Syria and Rojava,” he added, using the Kurdish name for northern Syria.

The road ahead though is a perilous one. Local YPG commander Heval Amude says they him and his men are preparing for “extreme resistance” as they edge closer to Raqqa. IS is well armed and recently announced they have started to recruit young men over 14 for military service.

“But we shouldn’t underestimate our enemy,” he said. “We are very serious, and in this way we take them seriously and make our plans.” Islamic State
Kurdish fighters chase IS from key base near Raqqa Islamic State
IS seizes Kurdish-controlled town near stronghold of Raqqa