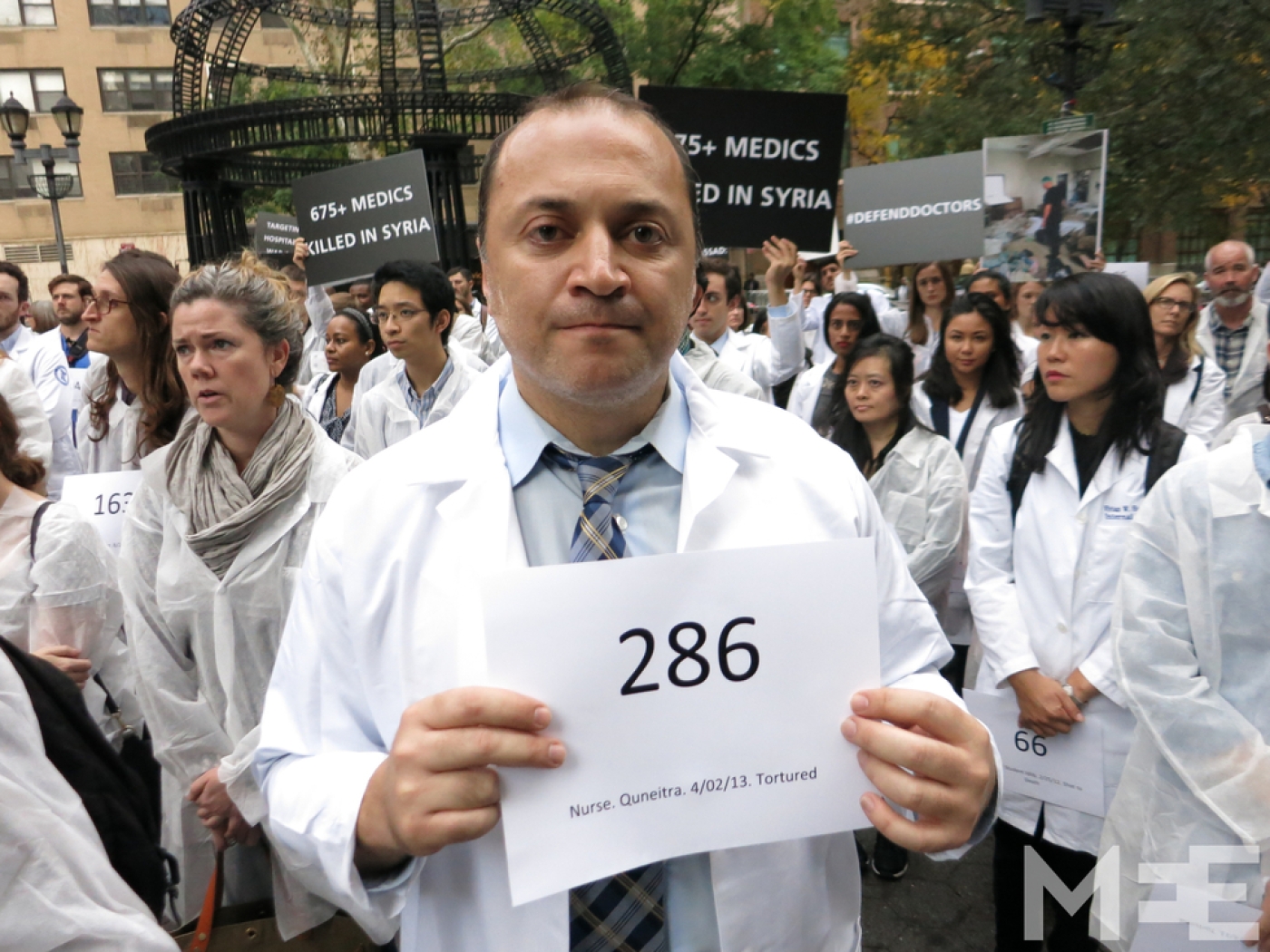 Dr Ahmad Tarakji, president of Sams, holds a placard bearing the name of one of the 679 medics who have died in the line of duty in Syria (MEE/James Reinl)

By
James Reinl
UNITED NATIONS, United States – Tales of heroic Syrian doctors risking their lives to help others got New York-based physician Dr Mary White out on to the streets this week.
She was joined by some 200 doctors, medical students and other protesters outside the UN headquarters on Thursday to demand the world body do more to stop Syrian medics being killed in a brutal, multi-front war that has claimed more than 250,000 lives.
“I’ve heard about doctors crossing from Turkey into Syria every day to deliver medical care to people who desperately need it. It’s heroic,” Dr White, an infectious disease expert at Mount Sinai Hospital, told Middle East Eye at the rally.
“The fact that they continue to serve their people despite having every opportunity to leave is something I found very compelling.”
The protestors laid down in a staged “die-in,” dressed in white gowns and holding placards bearing the names of some of the estimated 679 medics who have been killed by bombs, inter-militia fighting and other causes these past four years.
According to the Syrian American Medical Society (SAMS), there have been 313 attacks on hospitals since the conflict began. The group blames 90 percent of raids on forces loyal to President Bashar al-Assad and another four percent on the Islamic State (IS) group.
Three SAMS hospitals have been targeted and two staff members have been killed in Russian airstrikes since Moscow sent its jets into Syria’s skies last month, the group says. They were two hospitals in southern Aleppo city and a clinic in Sarmin, in Idlib province.
Dr Majed Abou Ali, a Syrian dentist, has seen the chaos with his own eyes.
Until last year, he worked in Eastern Ghouta, a rebel-held stronghold that has been subjected to repeated attacks and heavy bombardment by pro-government forces, as well as a contested chemical weapon attack in 2013.
“Many of my friends lost their lives, many were tortured to death, just because they were providing health services,” Dr Ali told MEE. “We were under such a sustained, systematic attack that it was unusual to pass 24 hours without a missile or bomb exploding around me.”
He fled Syria with his one-year-old son last year after a 16-day bombardment of Eastern Ghouta. He currently lives in Gaziantep, in southeast Turkey, where he continues supporting his colleagues from afar. It has been a brutal war, he said.
“Four years ago, the Syrians who demonstrated asked for democracy, freedom and dignity,” he told MEE. “The mentality of the Syrians has changed over time. Now they just ask to stop this war. And to protect the hospitals, the schools and the markets.”
Dr Ahmad Tarakji, president of SAMS, has spent the past few weeks in Washington and New York, trying to persuade officials, diplomats and ultimately the UN Security Council to do more to stop doctors being killed in Syria.
“The key ask is to establish a mechanism to identify attacks on healthcare facilities and providers and a mechanism to document the attack, followed by an investigation into who carried out that attack and some accountability process to bring the perpetrators to justice,” he told MEE.
The 15-nation UN body has been deadlocked on Syria, with the US and European members insisting that Assad must step down in any transition of power, while Russia, a long-standing ally of Damascus, rejects that demand.
Russia, together with China, has vetoed four draft UN resolutions on Syria.
But in August, the council unanimously passed a US-drafted resolution laying the groundwork for the Organisation for the Prohibition of Chemical Weapons (OPCW) to launch investigations into who was responsible for chemical attacks in Syria.
SAMS officials say a similar mechanism could exist for investigating attacks on hospitals, which is defined as a war crime by the International Criminal Court. Russia’s mission to the UN did not respond to MEE’s request for comment.
“Everybody must understand the dangers of the destruction of Syria’s healthcare system, which could lead to a situation where our attempts to vaccinate people and stop the spread of a disease might be affected, which is why we need protection,” said Dr Tarakji.