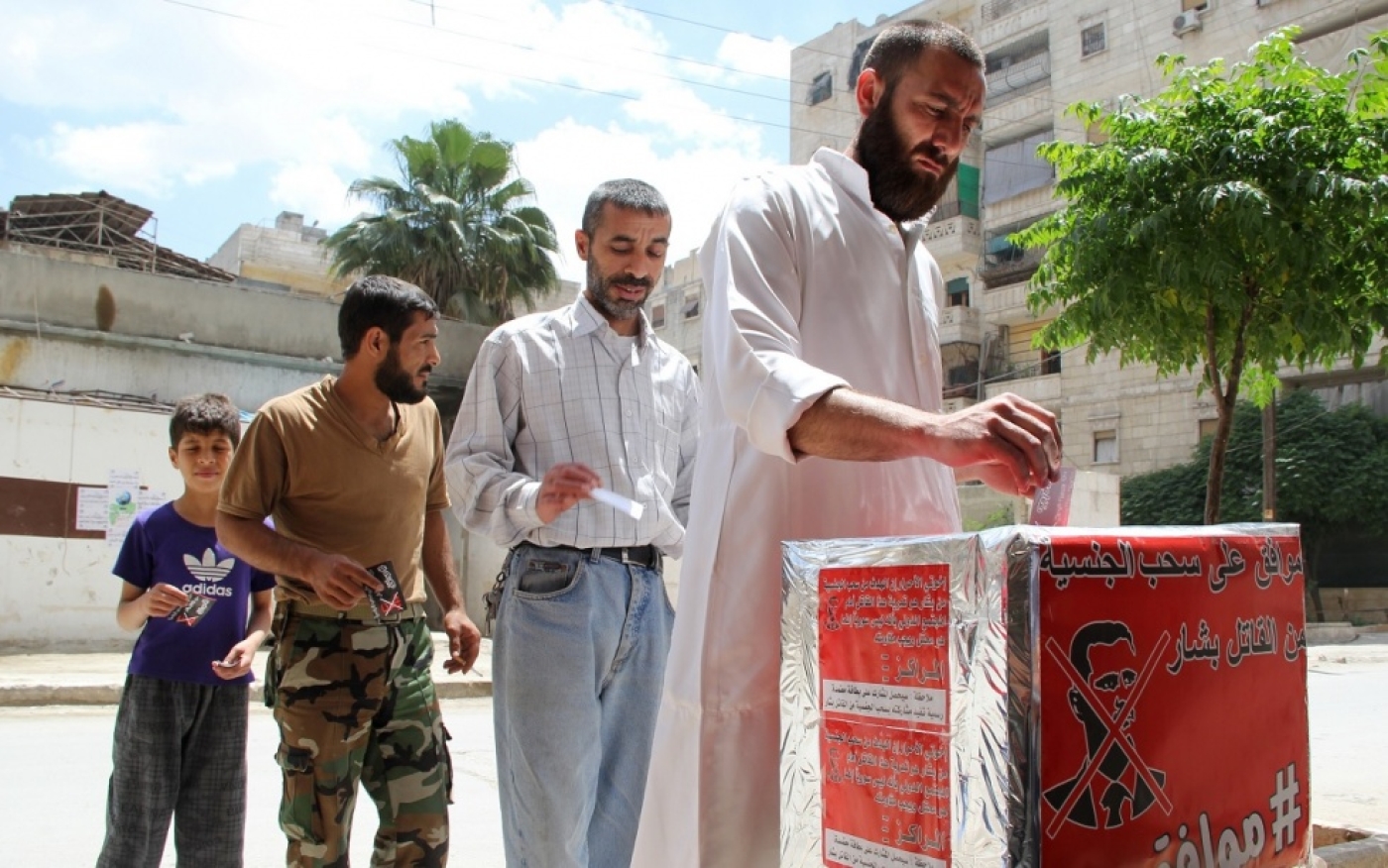 AZAZ, Syria - As voting in government-held areas of Syria got underway on Tuesday, Azaz and Afrin - two small neighbouring towns in the Aleppo countryside - offer a case study in just how deeply complicated and divided the situation in the country is.

Before the country’s civil war started in 2011, the two villages had 30,000-40,000 inhabitants each. Located just a few kilometres apart, both are close to the Turkish border in northern Syrian. Divided by a small mountain range, they are similar in almost everyway, except one. Azaz is a mostly Arab village, under the control of the Islamic Front (IF), a coalition of Islamist rebel groups. Afrin is Kurdish and under the control of the Kurdish armed militia the Democratic Union Party (PYD).

Today, like millions of Syrians in rebel-held areas and the 8 million people displaced inside and outside the country, the people of Azaz will not vote. They are routinely punished for their loyalty to opposition forces with airstrikes. In Afrin, the question of voting is not so simple. The town’s population is keen to avoid retribution from both rebels and the Syrian government and the elections are shrouded in secrecy.

In Azaz in the rebel-held northern Aleppo countryside, there's no sign that a national election is taking place. There are no posters of Bashar al-Assad - or the two other candidates - hanging in the streets. Rubble is all that remains of many buildings here.

The people of Azaz won't be participating in today's election - they couldn't if they wanted to. Azaz was “liberated” by opposition forces in July 2012 and was controlled by rebel brigades until the Islamic State of Iraq and the Levant (ISIL) took control of the town in September last year. After six months of brutal rule, ISIL left the town in March and it is back under the control of opposition forces.

In the bustling vegetable market in the town, residents are picking through the cucumbers and onions in the late afternoon sun. Abu Adna, 27, sifts through the squash at his modest vegetable stall as he talks. “This is not an election, it's a farce. This election happens under the blood of the Syrian people. There are many airplanes and a lot of shelling here. What is this election? It's a farce.” he says.

Air strikes hit the town most days, often with casualties. Abu Hamid, 24, a customer at the market, isn't afraid to speak against the president and denounce the election. The lives of the people here are worth nothing, he says: "Ten days ago we found my uncle in small pieces like fish food - the legs in some places, the hand in another place.”

Young children bounce through the market eating sweets and carrying large tubs of yoghurt alongside their parents. Safr Yusef, 21, overhears the talk of elections. "Anyone who votes for Bashar is 'shabiha'  [government militia]." he says. "They don't see those being killed."

Abu Omar, 60, used to work on the elections and distributed the ballot boxes. He believes Syria was more democratic before the uprisings in Aleppo and Hama in the early 1980s, but he is philosophical about how the voting will go: “This election they happen, if we want it or not, it will happen. If the people go to vote or not, they know who will win, this isn't really an election. Whether they want or not want Assad, he is the president for Syria.”

Back at his stall, Abu Adna, looks to the future. He sees the elections as an unhappy reminder of the democratic state he and those who rose up against the government hoped for. "In the future I want a real election with many people to vote for." This election is not democratic: "Now, it is fake." he says.

Coming north from Aleppo, the road is blocked. Vehicles veer right onto a makeshift track across the countryside, avoiding the twin goverment stronghold towns of Nubl and Zahraa that sit besieged in the middle of the rebel-held countryside. A frontline comprised of jihadist opposition groups pushes on the frontlines. Last month, as part of the Homs truce negotiations, the road from Nubl to Afrin was opened to allow humanitarian aid access, this perceived relationship between the government and the Kurds has not gone unnoticed by the Syrian opposition.

Syria's Kurdish minority are militarily strong but have walked a fine line between the rebels and the government in Syria's now four-year war. In Qamishli, a Kurdish-held area in the northeast of Syria, a truce exists between the remaining government forces and the Kurdish military. In Aleppo, the Kurdish military defend Shaikh Maqsoud on the rebel-held side of the city. Both relationships have been strained at times. ISIL are actively fighting against them in the east of the country, believing the Kurdish desire for sovereignty is a direct threat to their vision for an Islamic State in Syria.

This extreme view extended to Afrin when ISIL held Azaz and Afrin spent many months under siege until ISIL left Azaz in March. The Kurds are not in a hurry to return to this level of hostility, nor do they want the same fate as their neighbours, having so far managed to avoid the relentless bombardment from airstrikes those in Azaz have suffered.

Today, the small mountain range separating Azaz and Afrin is impenetrable. Rumours have circulated that voting will take place in Afrin since details of the presidential elections were announced in April. Publicly, the Kurdish leadership have debated and delayed a firm decision on whether they would participate.

A senior source for the PYD confirmed as late as last Sunday that voting would take place in the village. This came, however, three days after a statement from the director of security for the PYD in Afrin was issued to the IF saying such rumours were the work of the government, designed to drive a wedge between Kurds and the rebels, assuring the IF that. “We are with our brothers, the Syrian people in revolution against Bashar al-Assad,” wrote the statement.

Salih Muslim Muhammad, the leader of the PYD, wasn't keen to talk at length on the issue but told MEE by email: “We do not have anything to do with this election.”

In Qamishli, Kurdish police found and confiscated ballot boxes they say were placed in the area by the government. Pictures were widely shared and seem to verify the PYD's claims they won't be voting in Kurdish areas.

However, the normally accommodating Kurdish military, who have a history of protecting and working alongside journalists, have decided they don't want reporters present for the vote. “It's too dangerous.” “We don’t want help.” The PYD media centre in Afrin hung up when elections were mentioned.

Most Kurds want to stay away from the matter. “They do not want to be killed twice: once by the regime [government], the other by the FSA [Free Syrian Army] or the Islamists.” Explained Dilsoz, a former resident of Afrin, now living in Turkey. He called a friend in Afrin and asked about the voting: “We're scared that if they don't go to the elections, the regime [government] will start bombing Afrin.” they replied.

A former FSA supporter, Dilsoz is no longer enamoured with the rebels: “I do not care about İf someone votes for Assad, because many people were not happy and hated Assad, but the alternative is worse.” he says.

In Afrin today, calls go unanswered or drop when elections are mentioned. Everyone is offline, their phones off, or not going into town today. Whether they are voting or not is impossible to tell. Inaccessible not only by land, today Afrin has all but vanished. A town that spent months cut off from the world voluntarily closing rank to protect themselves from what they see as a no-win situation.

There is little doubt about who will win today's presidential election in Syria. For those outside of the government-held areas, like Azaz and Afrin, the result won't change anything, they have their own views of how the future of Syria will come about.

For the Kurds in Afrin, there are just two months until their own elections for the Kurdish leaders they hope will assist them in their aspirations. Dilsoz says: “The people of Afrin honestly do not care about elections becouse it is does not make sense for them, they have they own projects about the future of Syria.”

The Islamic Front, in control of Azaz, today said: “It is an irony that such elections take place while a large numbers of our people are either martyrs, injured, missing, detainee, or displaced. We assert that this election is illegitimate and false in regard to all the human values.” For them, the political future of the country will continue to be decided on the battlefield.