Civilian exodus largest since beginning of assault, says monitor, as 30,000 others flee Afrin in face of Turkish assault 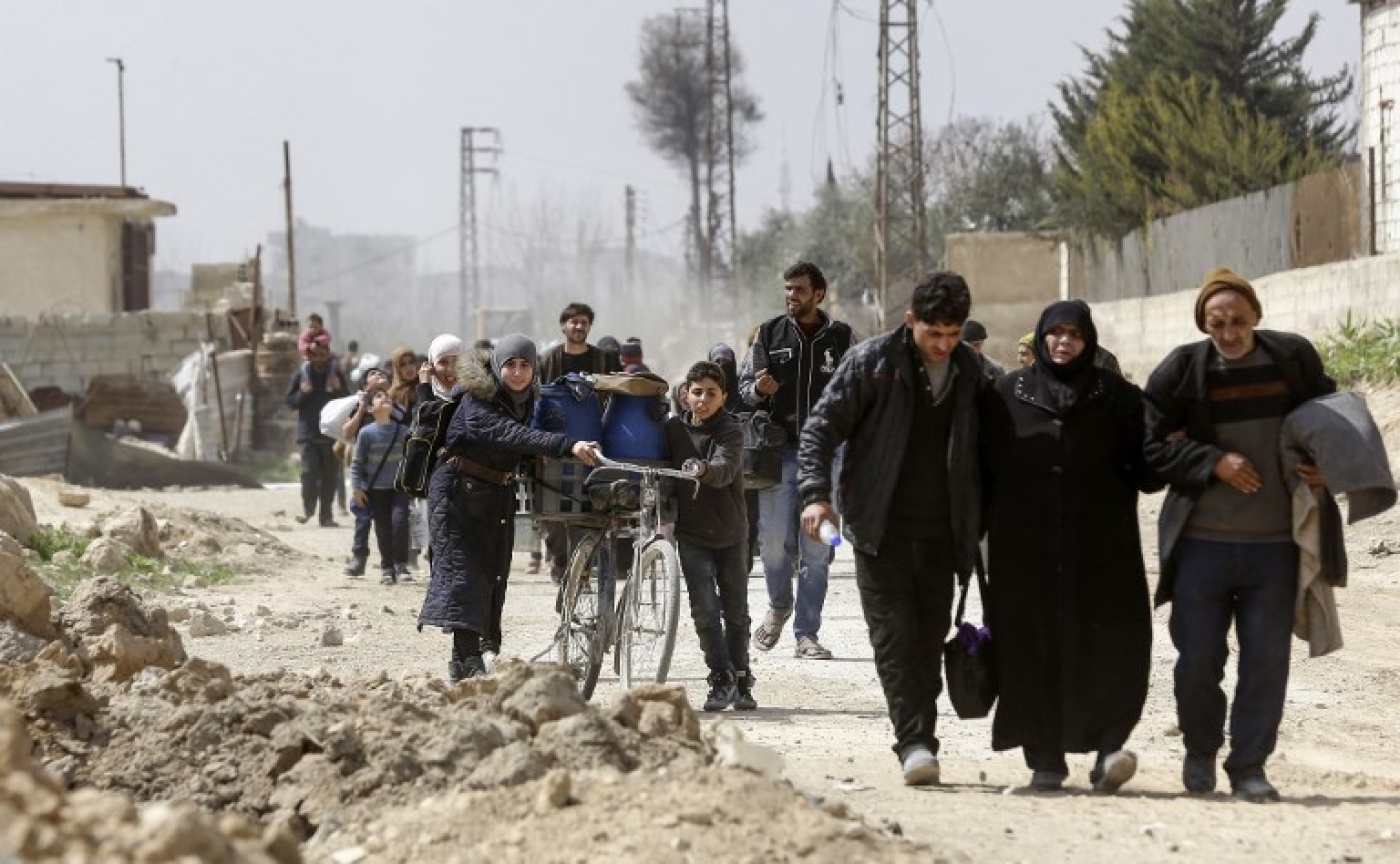 Heavy air strikes targeted a rebel-held area of Eastern Ghouta on Friday, killing 10 people in the town of Saqba, the Syrian Observatory for Human Rights said.

The Observatory said Russian jets carried out the strikes, citing its activist network on the ground. Advancing Syrian government forces have splintered the area close to Damascus into three enclaves in an offensive that has been underway for a month.

The latest wave of air strikes hit the southern-most enclave of Eastern Ghouta, from which thousands of civilians fled on Thursday into government-held territory.

The latest deaths brought the toll for the nearly month-old offensive to 1,350, with world powers still unable to stop one of the devastating conflict's worst crises.

The UK-based Observatory said nearly 20,000 people fled the enclave in 24 hours before the flow stopped on Thursday evening.

It called the exodus "the largest displacement since the beginning of the assault on Ghouta".

Bashar al-Jaafari, Syria's ambassador to the UN, told the UN Security Council in a meeting on Friday that 40,000 civilians had fled.

Separately, UN Secretary-General Antonio Guterres raised alarm over the exodus from Ghouta. He said "profoundly" regrets that a ceasefire, which the UN demanded in a unanimous vote in late February, has not been implemented.

"I urge all parties to the conflict to fully respect international humanitarian and human rights law and guarantee the protection of civilians," he said.

The UN children's fund UNICEF has response plans in place to cope with as many as 50,000 people coming out of the enclave.

Government forces now control 70 percent of the area, splitting the remaining rebel territory into three shrinking pockets, according to the monitor.

After a fierce air and ground assault, government forces on Thursday captured Hammuriyeh town, in an isolated southern part of Ghouta.

Early on Friday morning, Turkish artillery fire killed at least 18 civilians, including five children, and wounded dozens more in Afrin, according to the Observatory.

Ankara has consistently denied targeting civilian infrastructure during its nearly two-month-old campaign, but the Observatory said at least 245 civilians, including 41 children, have been killed.

As the offensives escalated, the foreign ministers of Iran, Russia and Turkey were locked in talks on Syria in the Kazakh capital of Astana on Friday.

Seven years of death from the air: Who's bombing whom in Syria?
Read More »

Speaking at the outset of the talks, Russian Foreign Minister Sergei Lavrov said that "millions of Syrians are looking in the direction of Astana" as the three power brokers work towards an end to the conflict.

The meeting is expected to lay the groundwork for a summit involving the presidents of the three countries in Istanbul on 4 April.

The Syrian war entered its eighth year this week having killed half a million people and driven more than 11 million from their homes, including nearly six million who have fled abroad in one of the worst refugee crises of modern times. Syria War
Seven years of death from the air: Who's bombing whom in Syria