BEIRUT- The opposition Syrian National Coalition voted to sack the Qatar-backed head of the Syrian opposition's interim government Tuesday, in the first major shake-up of the opposition since the election of the new Saudi-backed Coalition president. This is a clear sign that the kingdom is seeking to extend control over the opposition body.

The move also once again highlights how rivalries between Gulf rivals and the main backers of the Syrian opposition are dominating the political sphere. The Coalition has been plagued by divisions between blocs respectively aligned with the Gulf competitors- Saudi Arabia and Qatar - who despite being allies, have been increasingly at odds over Qatar's backing of Muslim Brotherhood administrations in other Arab Spring countries, including Egypt and Libya.

The Coalition's General Assembly voted to dismiss Ahmad Tohme as head of the interim government and dismiss the cabinet, following a dawn vote in Istanbul, according to a statement from the Coalition released early Wednesday.

The statement denied the vote reflected a lack of confidence in the cabinet, but said it was a "chance to grant confidence to the new technocratic expertise," adding the decision was "purely democratic and made in accordance without national interest."

Tohme, considered close to the Muslim Brotherhood, was appointed ten months ago to head the government designed to operate as an alternative administration in rebel-held Syria. But in June, just days before he was replaced as head of the Coalition, Saudi-backed Ahmad Jarba sought to rally a vote of no confidence in Tohme's government, also annulling a decision to sack the group's military wing, the Supreme Military Council over corruption claims.

Last Wednesday, a little-known businessman, Hadi al-Bahra, replaced Jarba, who was forced to hand over the presidency, after completing two terms under the Coalition constitution. Coalition sources told Middle East Eye that Bahra will remain in the shadow of Jarba's leadership, and likened the election to a Putin-Medvedev style power sharing agreement rather than a genuine handover. Tohme's sacking appears to reflect those claims.

"Jarba will continue to try to control things through Bahra. He'll use him like Putin used Medvedev," said Kamal Labwani, an outspoken dissident and member of the bloc opposing Jarba as leader.

Jarba was widely considered Saudi Arabia's appointment. He took the helm of the deeply divided Coalition in July 2013, when he beat his rival, Mustafa Sabbagh, backed by Turkey and Qatar, and following an expansion process aimed at diluting the Muslim Brotherhood's influence in the body.  He was narrowly re-elected in January 2014, beating defected Prime Minister Riad Hijab, but triggering a wave of resignations, mostly by those backing Sabbagh's bloc, just ahead of critical peace talks with the Syrian regime in Geneva.

Those members rejoined the Coalition in March, in what appeared to be an attempt to weaken Jarba's chances at re-election, amid reports he would try to seek an amendment to the constitution to seek third term.

Jarba faced criticism for having little influence on the ground in Syria, failing to unify and secure support for Syrian opposition rebels fighting both Assad and radical Al-Qaeda-linked groups from the Islamic State of Iraq and the Levant (ISIL).

Following his appointment, Coalition spokesman, Monzer Akbik said Bahra's election was the result of a shifting of alliances in the Coalition after months of reconciliation efforts to overcome deep rifts, but said more work needed to be done.

"The split in the Coalition is now less severe," he said, "People are becoming more mature," he said.

"[Bahra] has a full plate on his hands," he continued. Easing tensions between the political blocs, organising a better structured military command among the rebels, providing humanitarian services and links between the revolutionary forces and Syrians inside the country, as well as maintaining engagement with international opposition allies would be his first priorities, he said.

The Coalition statement released Wednesday following Tohme's sacking said Bahra had "stressed the importance of institutional and technocratic work and the selection of human cardres must be based mainly on experience."

Coalition sources said Jarba is unlikely to pursue a third term following Bahra's election, but will remain influential, and Akbik indicated Jarba would still have an important political role.

"We have had successful diplomatic efforts before, and these need to be continued," Akbik said.

Bahra, who was born in Damascus in 1959 and holds a bachelor's degree in industrial engineering from Wichita State University in the United States, according to the Coalition's website, spent most of his professional life working in Saudi Arabia. According to the Coalition website, he managed several hospitals and businesses in Saudi Arabia between 1983 and 2005, and was CEO of Techno Media, a Saudi-based events and visual production company from 2005.

He was elected president of the coalition with 62 votes following a meeting at the Black Sea resort of Sile outside Istanbul in Turkey last week. His nearest rival, Mowafaq Nayrabiyeh, won 41 votes.

"Our top priority will be the restoration of the political relationship with the revolutionary movement, as the legitimacy of any political bloc is achieved through the support it receive from the grassroots movement," Mohammed Qaddah, Vice President of the Coalition, said in a statement issued at the time.

A previously little-known member of the political bureau of the Coalition, Bahra won praise as the chief negotiator for the opposition delegation at the failed Geneva II talks, after replacing Secretary General Badr Jammous on short notice.

"Bahra became important when he pleasantly surprised us as chief negotiator in Geneva," said one senior Coalition source, who spoke on condition of anonymity.

"He was very close to Jarba, always with him, so Jarba sort of remains important with Bahra now in power, however Bahra seems much more likeable to most people than Jarba."

With talks stalled following the resignation of international mediator Lakdar Brahimi  in May and the election of Assad for third term in a barely contested presidential election in June, there is so far little to indicate Bahra's election will help rekindle negotiations.

"The Geneva process is currently in the intensive care unit," said Akbik.

"The only way Assad will leave power is through military force, when he really feels that he could be defeated. So this is the only way for us to reach a revival of talks." 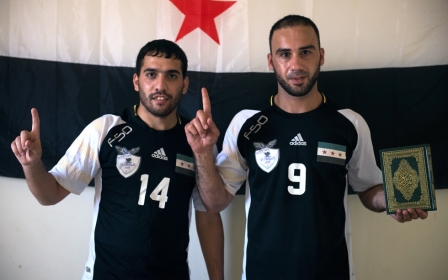