Syrian President Bashar al-Assad said on Sunday his forces must push on with their campaign to retake the besieged enclave of Eastern Ghouta from rebels, despite mounting international calls to end the bloodshed.

Assad's forces have seized over a quarter of the enclave on Damascus's eastern edges after two weeks of devastating bombardment, according to a war monitor.

As the United States, Britain and France stepped up pressure on Damascus and Moscow to call off the assault, the United Nations said it plans to deliver much-needed humanitarian aid to Eastern Ghouta's residents.

"The majority in Eastern Ghouta want to escape the embrace of terrorism. The operation must continue," Assad told journalists in remarks broadcast on state television.

Syria ally Russia last week announced daily five-hour "humanitarian pauses" in Eastern Ghouta. But while the air campaign has eased, fighting has intensified on the ground.

Assad said civilians would still have "the possibility" to evacuate the enclave, while denying there was any contradiction between a truce and ongoing fighting.

His remarks came as the Syrian Observatory for Human Rights said government forces had advanced to within three kilometres of Ghouta's main town, Douma, after retaking "more than 25 percent" of the enclave.

The advance on the back of 15 days of air strikes, artillery fire and rocket attacks that are reported to have killed more than 650 civilians, sent hundreds into flight to western parts of the enclave.

Syrian government air strikes on Eastern Ghouta killed more than 30 civilians on Sunday, the monitoring group said. "Thirty-four civilians were killed in regime strikes and rockets on Eastern Ghouta," said Rami Abdel Rahman, head of the SOHR, adding that 11 of the victims were children.

With the support of Russian warplanes, the Syrian military has advanced on several fronts, retaking control of farms and villages, a military source told state media.

The source said government forces seized a number of districts including Al-Nashabiyeh and Otaya, and had "eradicated terrorist groups" on the eastern outskirts of Damascus.

They have reached the centre of the enclave, to the edge of Beit Sawa, according to the Observatory.

Abdel Rahman said at least 12 government fighters had been killed in two areas, Al-Rihan and Shifoniya, in overnight clashes with the Jaish al-Islam rebel group.

Hamza Bayraqdar, a spokesman for Jaish al-Islam, tweeted that the group's forces had launched "surprise attacks" against government positions.

The Observatory, which relies on a network of sources on the ground, said rebels had retaken some parts of Shifoniya.

The rebels had been forced to retreat and regroup in Eastern Ghouta because of the Syrian government’s “scorched earth” policy, Bayraqdar said on Sunday, according to a Reuters report.

In a voice message, Bayraqdar vowed government forces would be driven from the territory they had captured in Eastern Ghouta.

The rebels had fortified positions to confront the attacking forces once again, he said.

Several analysts said the enclave will eventually fall to the much more heavily armed government side, which has recaptured many other areas of the war-ravaged country using the same military tactics, Deutsche Welle reported.

An AFP correspondent inside Eastern Ghouta saw hundreds of civilians on Sunday fleeing from the town of Beit Sawa in the southeast of the enclave.

The Observatory said about 2,000 civilians had fled shelling and clashes in eastern areas to western parts of the enclave.

"Everyone is on the road. There's destruction everywhere," said 35-year-old Abu Khalil, carrying a little girl in his arms wounded on the cheek.

Apart from the civilian losses, at least 76 pro-government fighters and 43 rebels from Jaish al-Islam have also been killed in clashes since 25 February, it said.

Encircled by government-controlled territory and unable or unwilling to flee, Eastern Ghouta's 400,000 residents have in recent weeks suffered one of the most ferocious assaults of Syria's civil war.

Under siege since 2013, they had already been facing severe shortages of food and medicine. The region's over-burdened medical workers have been struggling to cope.

While falling short of a 30-day ceasefire demanded by the UN, Russia's announcement last week of daily humanitarian pauses in fighting had raised hopes of some aid deliveries and evacuations.

A convoy of "46 truckloads of health and nutrition supplies, along with food for 27,500 people in need" will finally enter the battered enclave on Monday, the UN Office for the Coordination of Humanitarian Affairs said.

OCHA said further deliveries would follow and that it had "approval" to help 70,000 needy residents.

Moscow has offered safe passage to non-combatants wishing to leave Eastern Ghouta during the pause, but no Syrian civilians have left the enclave since the first break in fighting took effect on Tuesday, the Observatory said.

On the international front, US President Donald Trump and British Prime Minister Theresa May said Russia and Syria were responsible for the "heart-breaking human suffering" in Eastern Ghouta.

The UN's regional humanitarian coordinator for Syria, Panos Moumtzis, sounded the alarm over the increased violence.

"Instead of a much-needed reprieve, we continue to see more fighting, more death, and more disturbing reports of hunger and hospitals being bombed," he said.

"This collective punishment of civilians is simply unacceptable."

As Syria's conflict this month approaches its seventh anniversary, Assad's forces, heavily backed by Russia, have retaken most of the territory once lost to rebels. 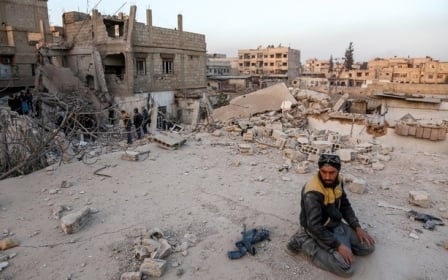