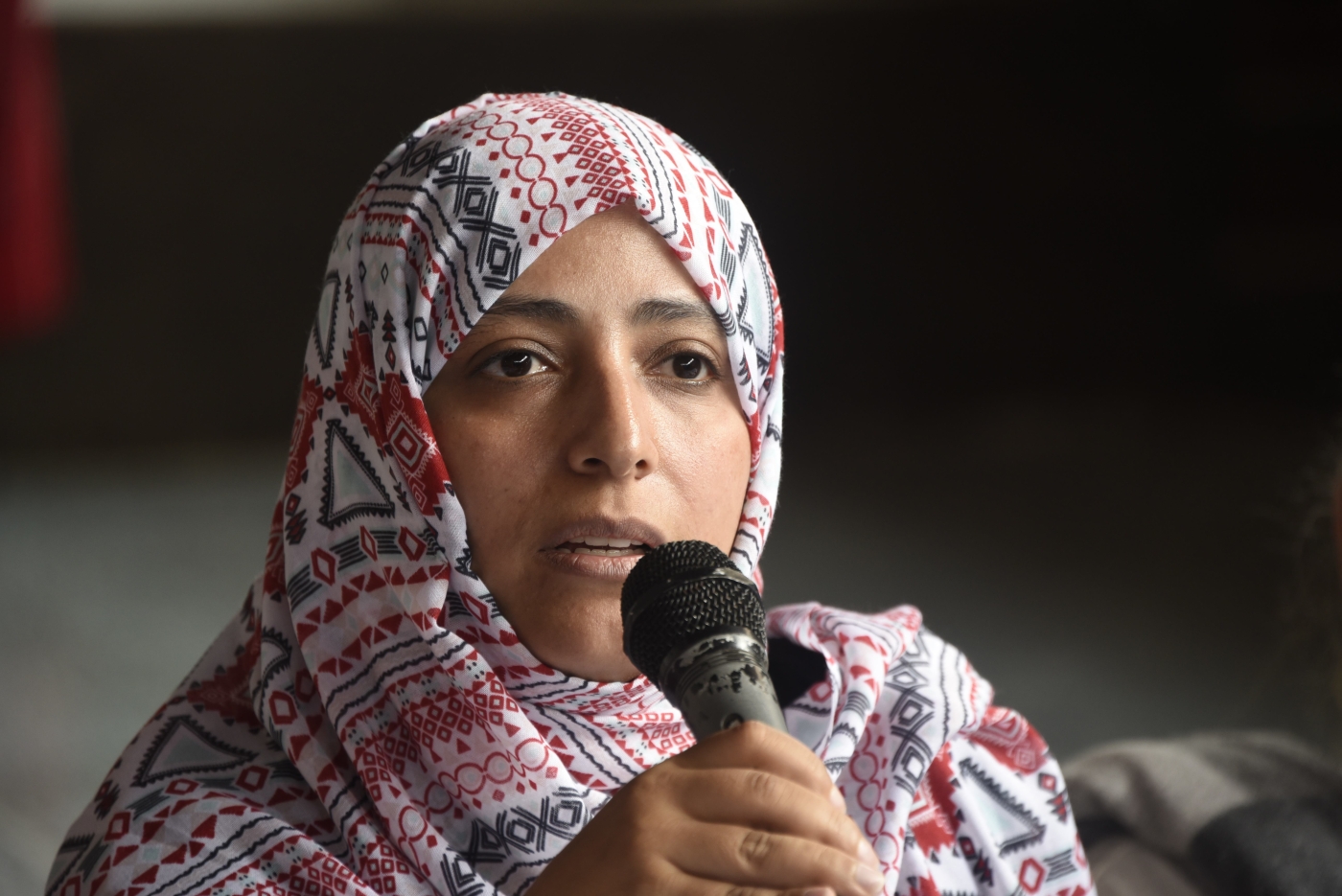 'I am subjected to widespread bullying, and a smear campaign by Saudi’s media and its allies,' Karman wrote on Twitter (AFP)
By
Yasmina Allouche

The panel was described in 2018 by CEO Mark Zuckerberg as Facebook’s “Supreme Court” and will monitor the platform for harassment, hate speech and misleading images and content.

“I am glad to join the Global Supervision Board for Facebook and Instagram Content. Thanks to social media platforms, government monopoly over the media and information is no longer possible,” Karman wrote on Facebook.

The panel, whose members hold 27 nationalities and speak 29 languages between them, reportedly aims to provide a safe space for users and to level mounting criticism against the platform.

However, Karman, who was awarded the Nobel accolade in 2011 for her role in the Arab Spring, has faced a targeted online campaign following her appointment to the Facebook board, as critics have accused her of holding “radical views” and of being affiliated to the Muslim Brotherhood, due to her previously held position as a member of Yemen's Islah party.

“I am subjected to widespread bullying, and a smear campaign by Saudi’s media and its allies,” Karman wrote in a Tweet on Monday reacting to the backlash.

“What is more important now is to be safe from the saw used to cut Jamal Khashoggi’s body into pieces,” she added, in reference to the Saudi journalist and critic brutally murdered in 2018.

The ongoing smearing campaign against @TawakkolKarman after she joined @Facebook-oversight board is shocking. Smearing campaigns are abusive tools to destroy people. I hope Tawakkol will make it this time, even though her tweet is alarming us of something dangerous to come #yemen pic.twitter.com/IyVUwxApd0

In addition to critical articles from pro-Saudi and Emirati news sites, many accounts took to social media to voice their opposition to her appointment, arguing it meant Facebook would become a tool to advance the Muslim Brotherhood's “ideological advocacy and extremist activity”.

#Tawakkol_Karman is spreading hatred among people and using the media to destabilize Arab countries. Also, supporting countries and organizations involved in terrorism. Facebook is no longer represented moral principles and freedom of expression after #Karman joined it. pic.twitter.com/fjJehuKqDg

The Facebook application has been deleted, because of Tawakkol Karman , do not need it anymore, it is not credible #حذف_الفيسبوك_بسبب_توكل_كرمان

Congratulations Facebook !
You are now a puppet in the hands of Muslim Brotherhood terrorists. #No_Tawakkol_Karman pic.twitter.com/EUvKEzM3ne

The Muslim Brotherhood, founded in 1928 in Egypt as a religious, social, and political movement, is designated as a terrorist organisation by Saudi Arabia and several allied states, where its members have been incarcerated and - particularly in Egypt - have died in detention or been killed.

There has also been debate in the United States over whether the Brotherhood should be included on a terrorism list.

Protesting Karman's appointment, users online called for people to deactivate their Facebook accounts and to send a “warning” that her alleged political orientation was fundamentally inconsistent with Facebook’s policies.

John Talaat, a member of the Egyptian parliament’s communications committee, called on MPs from across the region to take action against the appointment, describing it as a “farce” and “a provocative step”.

In 2011, after she won the peace prize, becoming the first Arab woman and Yemeni to do so, a statement issued by the Muslim Brotherhood identifying her as a “Yemeni Muslim Brotherhood member" sparked widespread criticism and speculation about her affiliation to the group.

Karman was a member of the Islah political party, considered a branch of the Muslim Brotherhood in Yemen, until 2018, when she was suspended for criticising the Saudi-led coalition's role in the Yemen war.

Last year, Karman was featured in Time Magazine’s top 100 women of the year for her work amplifying women's voices in the region and for being “a leading part in the struggle for women’s rights and for democracy and peace in Yemen.”

Despite facing criticism, Karman's position on the monitoring panel has also been hailed online as a positive step for the region as a whole.

Warm, hearty congratulations to Nobel laureate Tawakkol Karman from all of us from Yemen for being one of the most important members of Facebook oversight board . pic.twitter.com/F7cLSsB1dc

Last year, Facebook found that people linked to the Saudi authorities and marketing firms in Egypt and the UAE were using its platforms to spread propaganda through fake accounts targeting the Middle East and North Africa. As a result, more than 350 accounts and pages were removed.

Facebook, Twitter and YouTube have become important tools in the Middle East and North Africa for spreading covert political messages, while numerous governments in the region have cracked down on online dissent.

Facebook declared last year its intent to update its policy on "combating hate and extremism", after repeatedly coming under fire for failures to implement effective content monitoring and curb the spread of disinformation on its platforms.