Temel Karamollaoglu, from Turkish throwback to voice for change

His Saadet movement echoes the Islamist parties of a bygone era, and is now seen by growing numbers of pious Turks as a check on the AKP 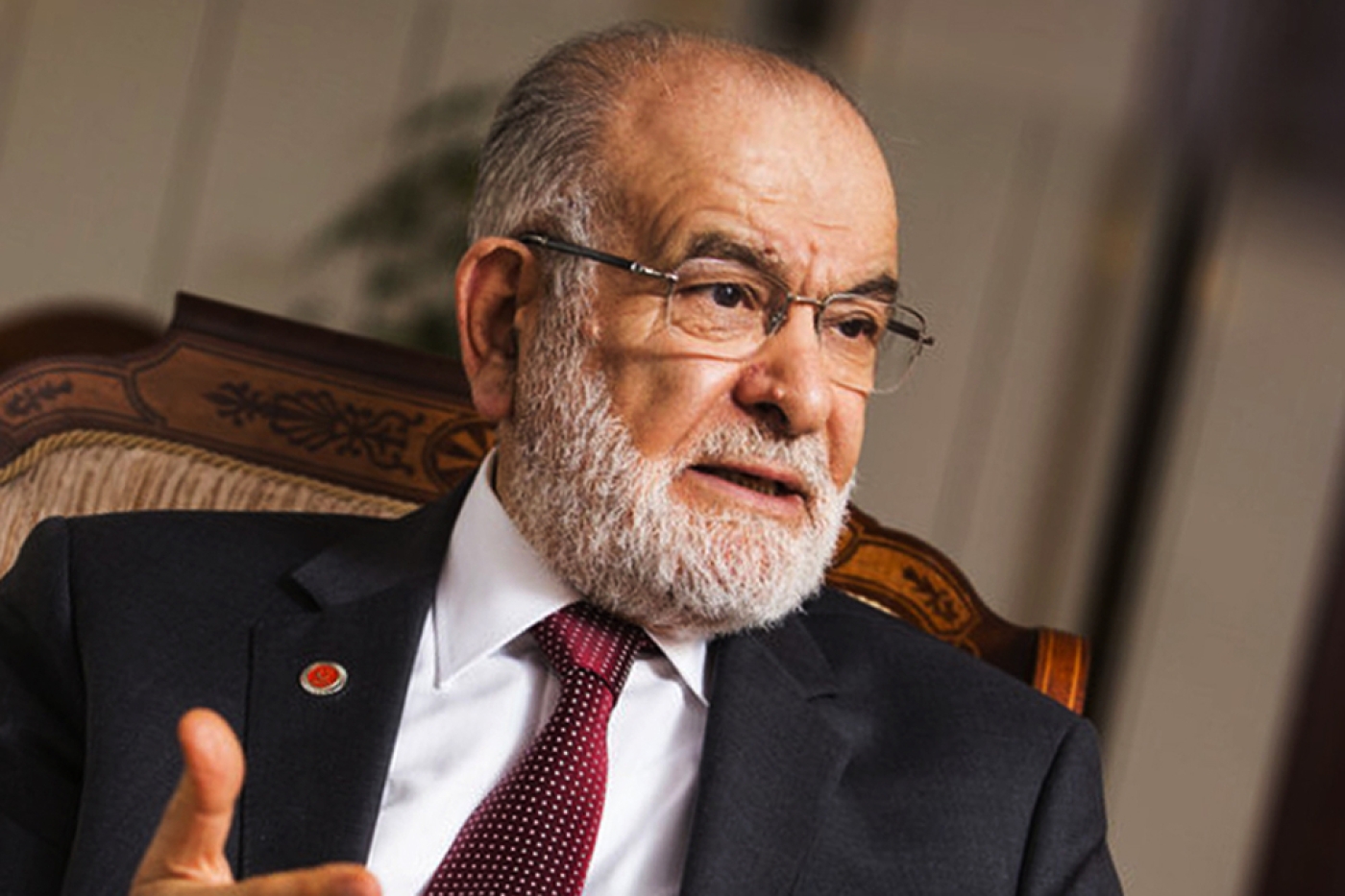 Temel Karamollaoglu, the 77-year-old leader of the Saadet Party (AA)
By
Suraj Sharma

ISTANBUL, Turkey – It is a message borne by an underdog given little chance, yet it is resonating with a growing section of voters. The strength of the message is in its simplicity: it is a quest for justice, equality and accountability.

And it was a similar message that the incumbent Turkish president, Recep Tayyip Erdogan, carried in 2001 when he and his colleagues broke ranks with Turkey's Islamist Welfare Party to win a stunning election victory under the reformist banner of the AKP.

Yet after more than 15 years in power that party is considered by many to strongly resemble the very establishment it fought, while adopting the same discriminatory practices it once was subject to.

Many of the reformists who helped found the AKP are now opposed to Erdogan's new-look AKP. Most prominent among them is former president, Abdullah Gul.

Saadet's message of anti-capitalism, opposition to the executive presidential system and its plea for law and justice strikes a deep chord with pious Muslims

But it is Temel Karamollaoglu who has emerged as the voice drawing support from even the most unexpected quarters.

The 77-year-old leader of the Saadet Party, which continues the traditionalist line of the Welfare Party, could play a determining role in the country's crunch presidential elections expected next year.

The winner will officially take over an office vested with extraordinary powers.

Karamollaoglu also has plenty of political experience to draw on. He has served as both MP and mayor of the Anatolian city of Sivas on behalf of the Welfare Party in the past.

Testament to Karamollaoglu's surge in popularity is that Erdogan in the past two months twice tried to convince him to join the AKP's right-wing nationalist alliance with the Nationalist Movement Party (MHP).

Erdogan's aim, according to observers, was to bring most Islamist and nationalist parties into the fold to be able to label the opposition as "traitors".

Karamollaoglu wasn't tempted and in his trademark measured tone said he and his party were only interested in an alliance of principles. Principles that included the clear separation of powers, which Erdogan and the AKP's executive presidential system does not guarantee.

From obscurity to prominence

But why is Saadet - established in 2002 to continue on the path of Necmettin Erbakan's Welfare Party after it was forced to close in 1997 by the secularists in the military – suddenly an important player despite never being able to make its mark in any election since its establishment.

According to Kemal Can, an author and expert on the political right in Turkey, the answer lies in the block of pious practising Muslims who are disgruntled and dismayed at how the AKP has evolved.

"Saadet's message of anti-capitalism, its opposition to the executive presidential system and its plea for adhering to the rule of law and justice for all citizens strikes a deep chord with a large block of pious Muslims," said Can.

"This is a big block very capable of affecting elections like we saw in the June 2015 general elections and also during last April's referendum on the executive presidency."

The June 2015 general elections were the first time the AKP failed to win enough votes to form a government. Ahmet Davutoglu, prime minister at the time, suggested it was because of the party's insistence on promoting the executive presidential system.

The April 2016 referendum saw the AKP's executive presidency system endorsed by a narrower than expected margin, amid claims of irregularities in the vote count by some political parties.

Can said this block of pious Muslims is a shared base of both Saadet and the AKP and the reason for Saadet's past lacklustre showing at the polls was because many of its supporters were happy to give the AKP a chance in power.

Other Islamist parties that emerged after the closure of the Welfare Party have dissolved and joined the AKP in the past. From 1997 all Islamist parties operated under the banner of the Virtue Party, until it too was banned in 2001.

Incumbent culture minister, Numan Kurtulmus, dissolved his HAS Party in 2012 and joined the AKP in exchange for a senior position and around 20 MP seats for his followers.

Saadet has always resisted any such merger.

Can also said the emergence of the new centre-right Iyi (Good) Party under Meral Aksener did not fully appeal to this pious Muslim block since it was more nationalist leaning.

The economic policies of the AKP have also played a major role in this growing disgruntlement.

The AKP oversaw a period of tremendous growth based partly on neoliberal economic policies that involved a lot of privatisation. The result was the creation of a new wealthy class comprising those loyal to the AKP but with limited distribution of the wealth generated.

The ostentatious vaunting of this wealth has not gone down well with many pious Muslims either. And Karamollaoglu and Saadet's message of a more just system of generating and distribution of wealth has been warmly received.

Another sign of how serious a threat the AKP considers Karamollaoglu to be came when the pro-AKP media launched an assault on his private life after he rebuffed Erdogan's offer of an alliance. The pro-AKP media even questioned his "patriotism" since he had a British wife.

In a television interview, Karamollaoglu responded in his usual measured and calm style.

He said his marriage was not a secret and he had met his wife 53 years ago during his days as a student at the University of Manchester. And that she had converted to Islam and also adopted Turkish citizenship. He also pointedly said he respected her wish for privacy.

Saadet and Karamollaoglu make no attempt to conceal their conservative Islamist positions to widen their appeal.

For instance, public gatherings organised by the party are segregated along gender lines.

Secularist and leftist backing for Saadet and Karamollaoglu despite such conservative approaches has resulted in some observers saying it shows the desperation of Erdogan's opponents who will back anyone to defeat him.

Can said that assessment is not necessarily accurate.

"Accepted wisdom in Turkey is that it takes people from the same ideological side of the spectrum to remove the ruling party from power. Hence people in this situation are looking for candidates from the right," said Can.

"Of course there is an element of laziness and choosing the easy option in this. Instead of developing a new narrative based on a figure from the left, they are just looking for the most acceptable viable alternatives even if they don't agree with them on all issues," he said.

Karamollaoglu and Saadet are unlikely to stand a chance of winning any election but they now certainly are in a position where they could affect who wins or loses.

The louder they shout that they represent the people, the less I believe it

The party could also stand to gain if the AKP amends the law and drops the 10 percent national threshold required for parties to be able to enter parliament, according to Can.

The possibility for this exists since its alliance partner, the MHP, might struggle to pass the threshold, which requires that parties need 10 percent of the total vote in all provinces of the country to enter parliament.

Karamollaoglu hasn't put his name forward for the presidential race and said it is too early for Saddet to name a candidate. He has, however, said there are open to all ideas and offers.

He even suggested that Gul, who once broke ranks, will be welcomed back if he chooses to return.

For now Saadet and Karamollaoglu's star is shining bright, and is reflected in the view of people like Gamze, a 26-year-old headscarf-wearing, low-level state sector employee on minimum wage.

"We are constantly told how we [pious Muslims] were always targeted by the state before, but where is the empathy if we are now discriminating against others," she said.

"They say we are richer but I don't see it. The louder they shout that they represent the people, the less I believe it."