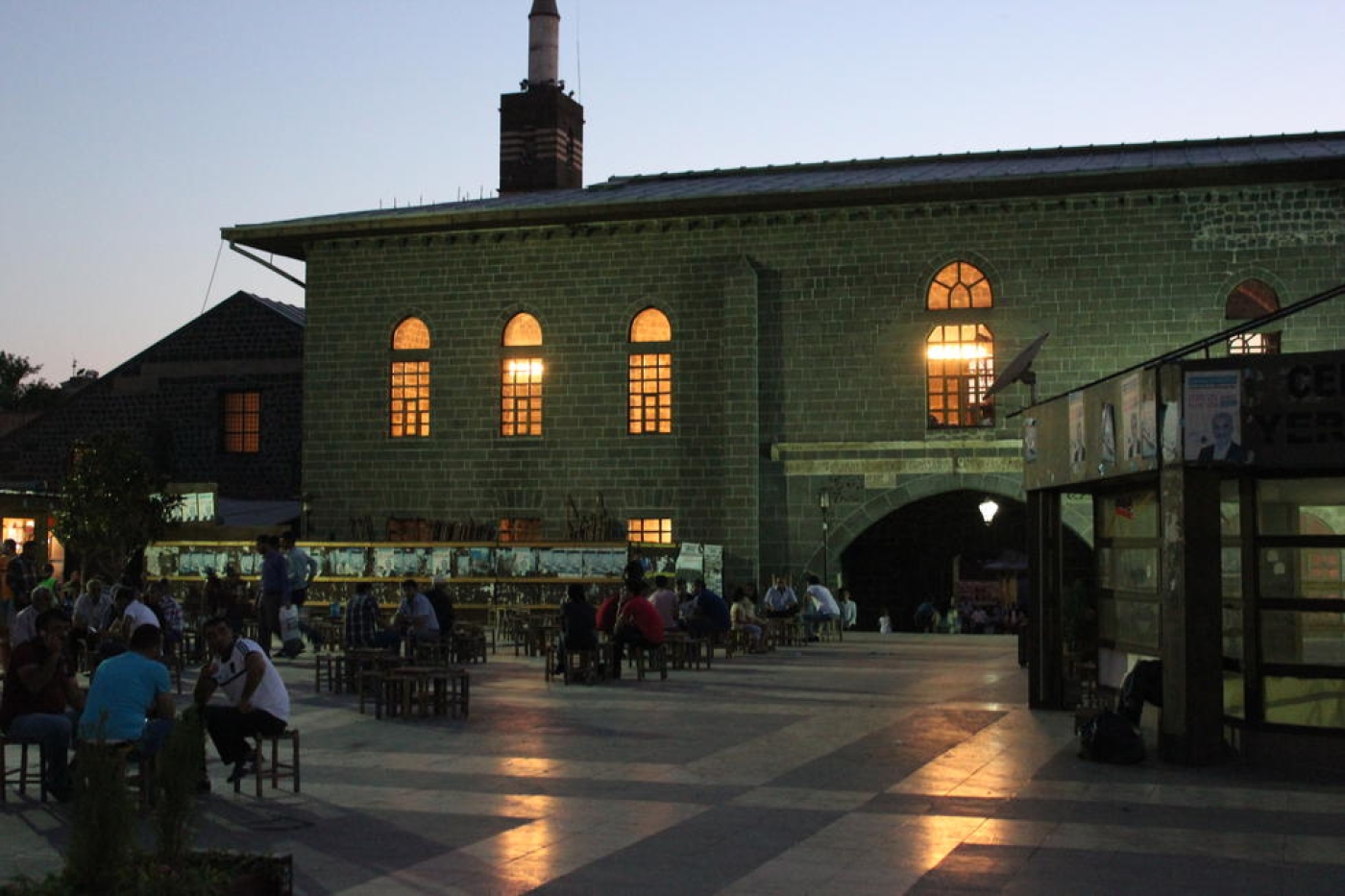 DIYARBAKIR, Turkey - The blazing summer heat that engulfs the city of Diyarbakir in southeast Turkey – or North Kurdistan as some would prefer to call it – stands as a pretty blunt metaphor for the political climate apparently developing in the region.

The huge imposing black walls that surround the Old City are a reminder that Diyarbakir has been a focal point for conflict for millennia while the visible poverty and inequality that still grips the city - with the common sight of children begging by roadsides - also acts as a reminder as to why for so long the Kurdistan Workers Party (PKK) was able to build support here with its promises of an independent, socialist Kurdistan.

Around the centre of Diyarbakir, people were still wandering the streets in the early late-July evening, while – as is ubiquitous in Turkey - men sat on stools drinking tea and coffee discussing the issues of the day.

But with tensions rising, this sort of scene may soon not be so common.

“There are policemen everywhere,” said one resident, who preferred to remain anonymous for security reasons.

“After 9pm people go away and go to their homes. Six months ago it was different – today we cannot go out in the evening. Six months ago we were in the streets until late in the night.”

The killing of two soldiers and wounding of three others in a car bomb outside Diyarbakir on Sunday was only the latest act of violence to rock the region this week and push the already fragile peace process closer to collapse.

On Monday afternoon, a chain of events would escalate tensions between the Turkish authorities and various Kurdish factions in Turkey, Iraq and Syria.

When a suicide bomber killed at least 32 socialist activists in the Turkish-Syrian border town of Suruc, many Kurdish activists and politicians were quick to accuse the governing Justice and Development party (AKP) of tacitly allowing IS and other militant groups to prosper in the region. The AKP leadership was quick to point the finger at IS, but this did not stop suspicions from mounting.

According to ANF, a PKK-linked news agency, the PKK's national executive even went so far as to claim that the “AKP carried out the massacre and used IS as a cover”.

The government has repeatedly denied any such allegations but the PKK soon responded by killing two Turkish policemen in southeastern Turkey in revenge and then killing another one on Friday.

The government in turn began bombing PKK positions in Turkey and stepped up its anti-IS operations in Syria. The authorities also blocked numerous websites linked to groups like the PKK-linked Firat News Agency (ANF).

By Saturday, the tit-for-tat attacks caused the PKK to declare the ceasefire “unilaterally ended”.

Crackdowns on alleged PKK supporters have followed. Six alleged members of the PKK’s youth wing were scooped up in a raid late on Saturday and 21 alleged PKK members arrested in Diyarbakir on Sunday.

The prospect of renewed violence is already worrying residents, many of whom remember the brutality of the conflict in the 1990s which saw thousands of Kurdish villages destroyed and led to a mass influx of internally displaced refugees to Diyarbakir.

Despite the start of the peace process and the introduction of a ceasefire with the PKK in 2013, mistrust between the two sides has never faded.

Demonstrations in the city have often ended in violence as the Turkish police and local protesters are known to carry live ammunition.

The apparently inability - or according to some, unwillingness - of the security services to protect the Kurdish-majority regions from attacks has now driven a further wedge between the Kurdish community and the Turkish state.

“We think 80 percent of relations now are going bad – it's worse than before,” said another Diyarbakir resident, referring to the height of separatist violence.

‘Politics, instead of guns’

Diyarbakir has been the focal point for Turkey's “Kurdish question” ever since the founding of the Republic in 1923 when the country's founder, Mustafa Kemal Ataturk, captured territory earmarked by the West for a potential Kurdish state.

Tensions have long festered but exploded in the 1980s when the PKK took up arms in its search for autonomy. More than 40,000 people were killed and tens of thousands of Kurdish villagers displaced during the decades of bloody guerrilla war that followed.

“My village was burned three times,” said Mahmut Bozarslan, a journalist based in Diyarbakir, whose family was affected by the violence of the 90s.

“I was not able to visit my village for more than 10 years. Sometimes you could not go out after daylight – after 5pm the roads were closed. I don't think we will go back to those days.”

The 2013 ceasefire agreed with imprisoned PKK leader Abdullah Ocalan originally set out to herald a new era in Turkish-Kurdish relations, but within a year tensions across the border in Syria where IS had managed to beat back Syrian Kurdish forces had begun to spill over.

Bozarslan says that since then there have been mounting tensions in the city, with protests become more dangerous.

“Especially this last year, it's getting more and more complex,” he told MEE. “The security problem is worse than in other years.”

“The most important point is that live guns have been used in demonstrations in the last year. Before, only police officers were using guns, but now the people inside the demonstrations are also using guns.”

For many observers, the rise of the People's Democracy Party (HDP), a pro-Kurdish political party which proclaims its commitment to peace, human rights and parliamentary democracy, seemed to embody a new moderate path for peace.

Feleknas Uca, an MP for Diyarbakir elected in June, is emblematic of the HDP's approach. The first person from the Yazidi religious minority elected to parliament, she says she is under no illusions about who is to blame for the breakdown in Turkey-PKK relations.

“The Turkish state collapsed the peace process by these air operations,” she said. “The President [Recep Tayyip Erdogan] and Prime Minister [Ahmet Davutoglu] are trying to put Turkey into a war.”

“The policy of Turkey and the policy of the AKP about IS is clear and it's open. They started operations against IS and the PKK, but [until now] they arrested maybe 50 IS suspects, while they arrested 500 Kurds. There are a number of HDP and (Democratic Regions Party) BDP members, members of syndicates, civil society bodies [who were arrested].”

Though the HDP deny that it has a direct connection with the PKK – or what President Erdogan described as an “inorganic” link – the numerous picture of Ocalan that dot their small offices in Diyarbakir leave little doubt that he remains a source of inspiration.

Uca said that there were less people arrested during the military coup in 1980, which itself followed a period of intense political violence, than were being arrested today and warned that the backlash caused by the government's bombing of PKK positions would only escalate.

“The war will not be in only one place, it will spread to all places,” she said. “But we are on the side of peace. As the HDP, we can only do this.”

Other commentators, however, argue that the current escalation is a bargaining chip.

“They [the AKP] are trying to pressure the PKK, surround them and force them back into a dialogue,” said Mohammed Akar, chairman of the AKP branch in Diyarbakir. “In the short term we will not get the result from this - but in the middle term, people will understand that only negotiations will solve the problem.”

Akar, an ethnic Kurd, said that ethnic divisions in Turkey would not spiral into further violence.

“The dynamic which connects Kurds to Turkey is very powerful. The most important factor is that Kurds do not want to separate from Turkey,” he added while stressing that the rhetoric of the HDP was further inflaming passions.

“The HDP should have taken advantage of the chance given to them on a golden plate,” he said. “They won 13 percent of the vote and gained 80 parliamentarians. But out of this they use threatening language.”

“They called themselves the voice of the voiceless, the voice of all those who have been oppressed in Turkey. Because of this they won 13 percent of the vote. The HDP have to deny violence and guns.”

The HDP insist they remain peaceful, but mutual suspicions are explosive. Uca says that the recent anti-Kurdish measures have been payback on the part of the AKP for the HDP robbing them of enough seats in the general election to form a parliamentary majority.

“In Kurdistan, the AKP became only a symbolic party. In Diyarbakir there are 11 members of parliament. Ten are HDP, one is AKP,” she said.

“Kurds and Turks are not enemies. Our problem is the AKP government who want war. This is the problem. There is no problem between Turks and Kurds.”

For now, the sound of gunfire or explosions in Diyarbakir remain infrequent. But riot vans and other armoured vehicles are ubiquitous and there is an underlying fear of the possibility that before too long things could return to a state of near civil war in the region, as was seen in the 90s.

“People were being shot on the streets,” said Bozarslan. “Villages were being burned. Today there are not such things. But there are other forms of violence.”

“We don't want anybody to be killed," added another resident. "We all are human."